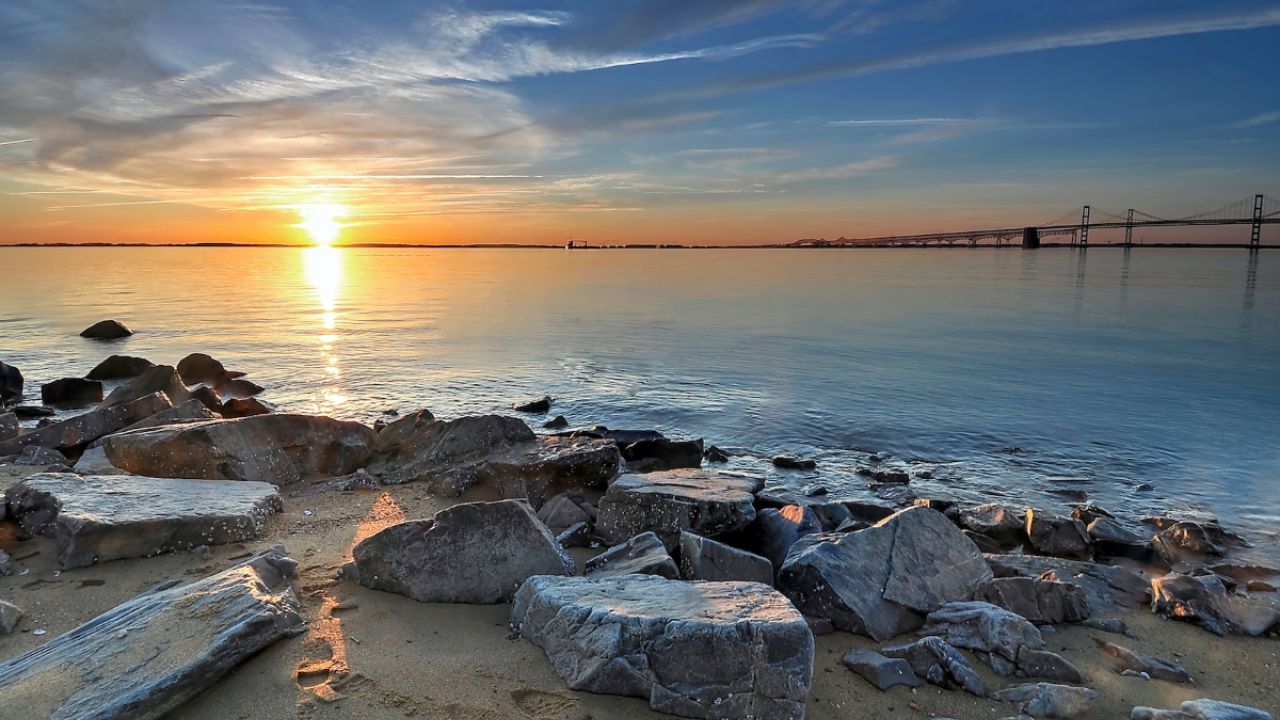 The chemicals have seeped into the bay, adversely affecting its wildlife, and potentially harming residents’ food supply and livelihoods. The contamination underscores the need for swift DOD cleanup, which used these chemicals in firefighting foams for decades and knew of their harms.

The DOD records reveal dangerous levels of PFAS including the notorious chemicals PFOA and PFOS, ranging from 0.8 parts per trillion, or ppt, to 2,200,000 ppt, in the water at these installations, which include: 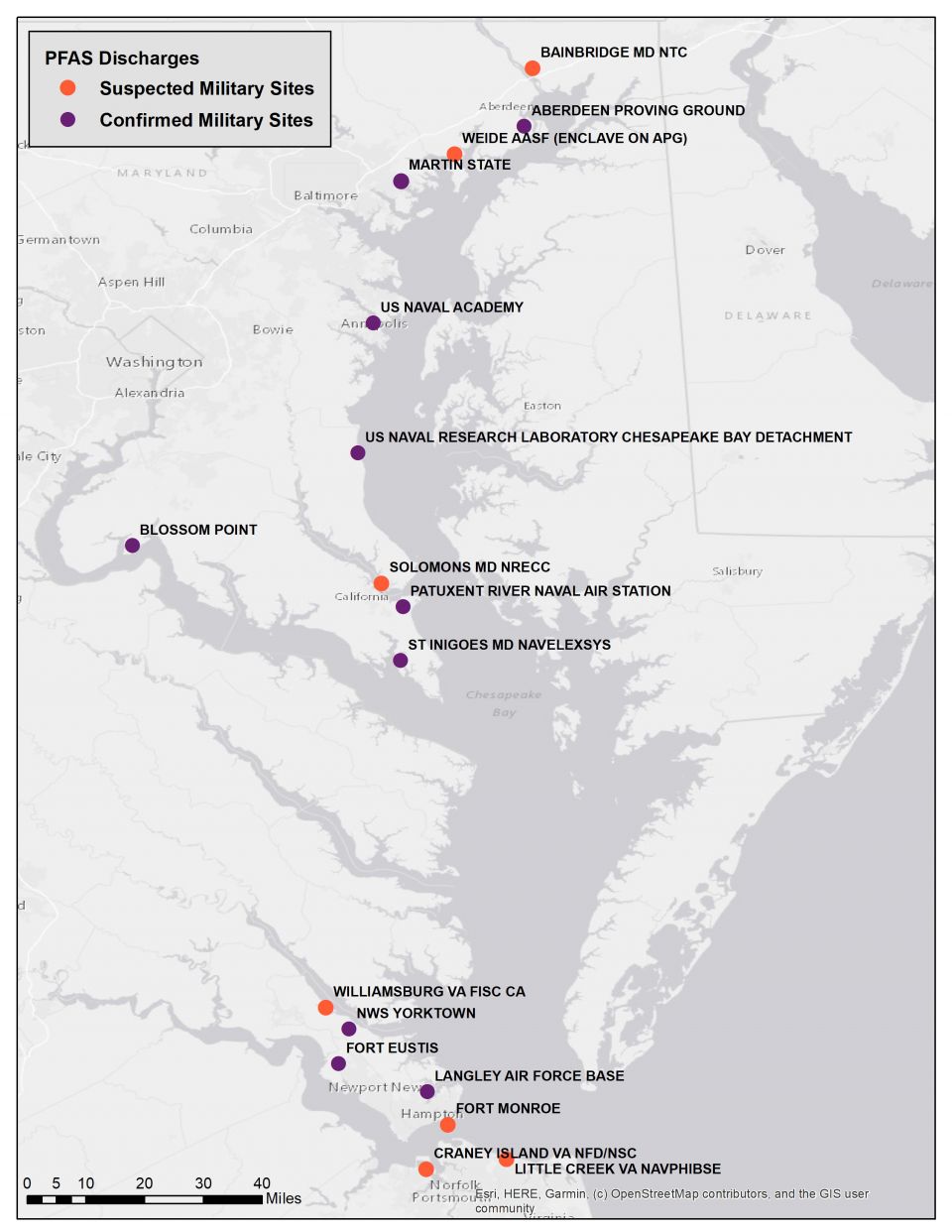 The highest detection was reported at Langley Air Force Base, in Hampton, Va. DOD has done little to address PFAS contamination at these bases.

The records also show that PFAS may be present in the groundwater at several other bases near the Chesapeake Bay where DOD has not tested to confirm the presence of PFAS. These bases include:

PFAS from these installations could be harming the bay’s wildlife, including crabs, oysters, and rockfish, or striped bass. PFAS-contaminated fish and shellfish pose a significant potential health threat to anyone who consumes it.

A 2020 study by the watchdog group Public Employees for Environmental Responsibility found 36 PFAS compounds in rockfish, oysters and crabs harvested from Cornfield Harbor in the Potomac River and from St. Inigoes Creek in Saint Mary’s County, near the Patuxent River Naval Air Station.

The study found a rockfish with 23,100 ppt of nine different PFAS, crab meat with 6,650 ppt of eight different PFAS and oyster meat with 2,070 ppt of five different PFAS. The oyster and crab were collected from St. Inigoes Creek, which is adjacent to Webster Outlying Field of the Patuxent River Naval Air Station. The rockfish was caught a few miles away. The highest detected level of PFOS at this site was 84,756.77 ppt, according to the DOD records.

In 2020, the Maryland Department of the Environment tested 20 oyster samples from areas near Webster Outlying Field, Hog Point and the Patuxent Naval Air Station and reported detectable PFAS in one sample at 1,570 ppt. However, the detection limit for the Maryland testing program was set high, at 1,000 ppt. This could mean that oysters with PFAS levels lower than 1,000 ppt were not included in the final results.

Earlier studies also detected high PFAS levels. A 2002 study by university researchers and 3M’s Environmental Laboratory revealed that oysters harvested from Hog Point – a fishing and camping recreational area located within the Patuxent River Naval Air Station –contained PFOS levels of 1,106,000 ppt. 3M was the primary maker of PFOS, one of the most notorious PFAS.

At the U.S. Naval Research Laboratory Chesapeake Bay Detachment, 25 miles north from Hog Point, the PFOS in groundwater was detected at 171,000 ppt.

There is currently no national standard for testing fish for PFAS. But the Environmental Protection Agency, collaborating with the U.S. Navy, aims to finalize a testing method later this year. In 2019 the Food and Drug Administration also created its own test standards.

The FDA has yet to set a safe level for consumption of PFAS in food. In 2019, the agency tested for the presence of 16 PFAS chemicals in foods across eight mid-Atlantic states, focusing on the most commonly consumed foods available in grocery stores and not locally caught or raised foods. The FDA detected PFOS in half of the seafood sampled. Fish from the Chesapeake Bay was not included.

The European Food Safety Authority set a consumption threshold of 4.4 nanograms per kilogram of body weight, or ng, per week. For a 160-pound person, a safe level of exposure to PFAS in food for an entire week would be 332 ng, equivalent to eating a small fraction of one oyster harvested from Hog Point.

Maryland and Virginia have not issued fish and seafood consumption advisories that recommend limits because of PFAS exposure.

Other states, including Alabama, New Jersey, Michigan and Wisconsin have begun to limit consumption of fish contaminated with PFAS. Michigan has started to issue an annual guide for the fishing community about where contaminated fish populations are and the amount of each type that is safe to consume.

The potential threat to Cheseapeake Bay shellfish and seafood from PFAS contamination at DOD sites is a local example of a U.S.-wide problem. Nationally, PFAS have been detected at more than 300 military installations, and they may be present at hundreds of other sites.

In 1983, animal studies financed by the Air Force found that some PFAS were toxic. In 1985, Navy experts once again cited the toxic effects of AFFF on fish and, in 1989, called for better management of AFFF waste.

In 2000, DOD was alerted that 3M planned to stop making AFFF, after internal studies showed evidence of its health hazards. A 2001 DOD memo concluded the main ingredient in AFFF was “persistent, bioaccumulating, and toxic.” Months later, an EPA official reiterated to the department the risks posed by PFOS and the entire class of PFAS.

Newer PFAS in replacement foams have been linked to many of the same health effects as those from PFOS, leading Congress to direct the department to phase out the use of fluorinated foams altogether.