Is Northern Virginia a D.C.-Area Hot Spot for ‘Forever Chemicals’ in Tap Water?

Tap water samples from throughout Northern Virginia were contaminated with the “forever chemicals” known as PFAS at levels significantly higher than those previously reported for other parts of the Washington, D.C., metro area, according to tests commissioned by the Environmental Working Group.

Detected levels of total PFAS in 19 samples of tap water ranged from about 6 parts per trillion, or ppt, in a state park in Fairfax County, to about 62 ppt in a public park in Prince William County. The higher level is about three times more than earlier detections in the District and Prince George’s County, Md.

Like the previous samples, the latest samples were collected by EWG staff and volunteers and analyzed by an accredited private laboratory using Environmental Protection Agency–approved methods. 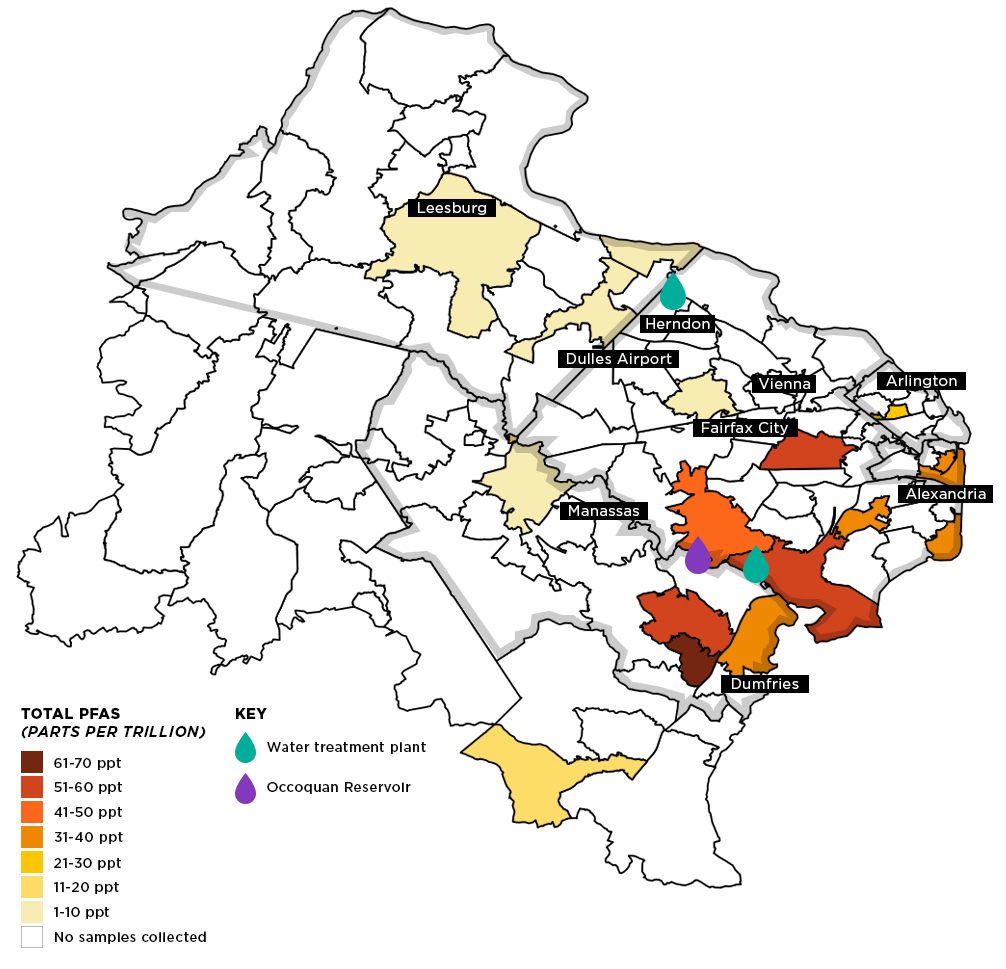 The chart below shows the levels of total PFAS detected in each sample and the ZIP codes where they were collected. Details of all samples taken at each site and the precise sampling dates are in the tables in the Appendix. 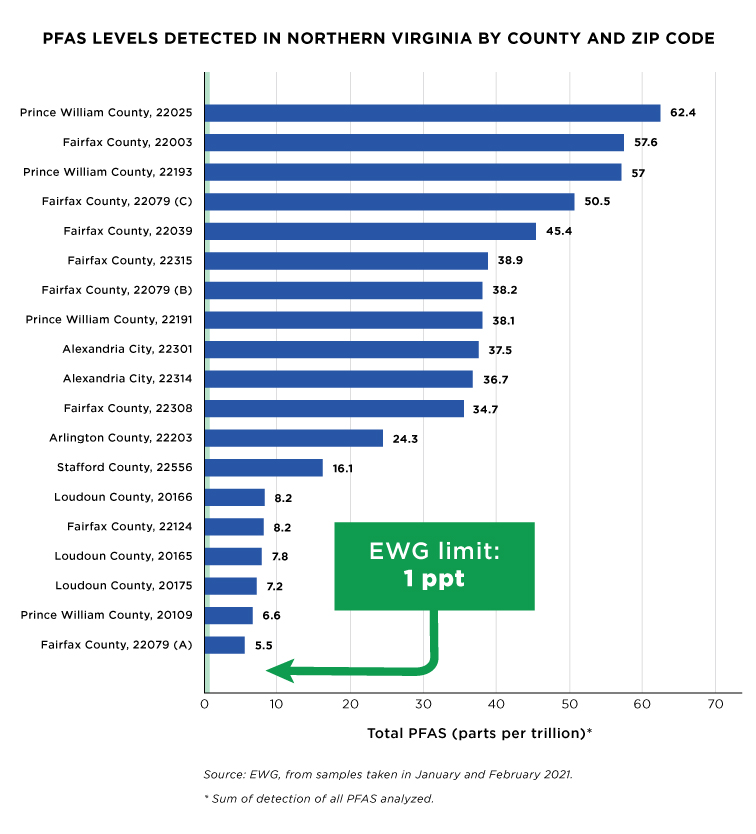 PFAS are known as “forever chemicals” because they build up in our blood and organs, and do not break down in the environment. Studies show that exposure to very low levels of PFAS can increase the risk of cancer, harm fetal development and reduce vaccine effectiveness. The EPA has not set a legal limit for PFAS under the Safe Drinking Water Act, but independent studies have found that a safe level is 1 ppt or less, a finding that is endorsed by EWG.

The source of PFAS contamination in the latest samples is not known. The level of PFAS in a sample of tap water is largely determined by the source of the water supply. In the Washington metro area, most drinking water comes from the Potomac River, but in Northern Virginia, the Occoquan Reservoir, on the southern border of Fairfax County, supplies water to about 40 percent of the 1.7 million customers served by the Fairfax Water Authority.

The compounds in EWG’s tests are a small fraction of the entire PFAS class of thousands of different chemicals. More than 600 are in active use, including the new generation of so-called short-chain PFAS, replacements for the long-chain PFAS that were largely phased out after revelations of their health hazards.

EWG’s latest tests represent a single sample from each site and may not show what is coming out of a tap today but rather a snapshot of a specific site on a specific day. The test results are likely representative of the water in the area where the sample was taken but are not intended to identify specific water systems. In light of our findings, EWG calls on all community water systems in Northern Virginia to conduct their own tests and release the results to the public as soon as possible.

Because the EPA has failed to set enforceable national standards for any PFAS chemical, water utilities are not required to conduct PFAS testing, make test results public or report them to state drinking water agencies or the EPA. Last year, Virginia passed a bill calling for a task force to conduct a study of PFAS levels in the state’s drinking water and to recommend legal limits for several PFAS.

EWG has mapped PFAS contamination of drinking water or groundwater at more than 2,300 sites in 49 states. A peer-reviewed study by EWG scientists estimates that more than 200 million Americans could have these toxic fluorinated chemicals in their drinking water at a concentration of 1 ppt or higher.

The Biden administration should quickly fulfill its pledges to set a drinking water standard for PFAS, to end non-essential uses of PFAS in household items and to designate PFAS as hazardous substances, which will kick-start the cleanup process and hold polluters accountable. The Biden administration should also take steps to reduce industrial discharges of PFAS into the air and water.

In January and February 2021, 19 tap water samples were collected by EWG staff or volunteers in 17 Northern Virginia ZIP codes and tested by an accredited independent laboratory.

None of the additional six compounds in the expanded list was detected in any samples. Two field blanks were collected alongside the February samples. There were no PFAS detections in either blank.

This table lists the PFAS compounds the laboratory tested for and the minimum detection limits for each one.

*Not included in analysis under the method.

These tables provide details of each sample tested, including the sample collection date, the method of analysis and the levels of individual PFAS chemicals detected in each sample.