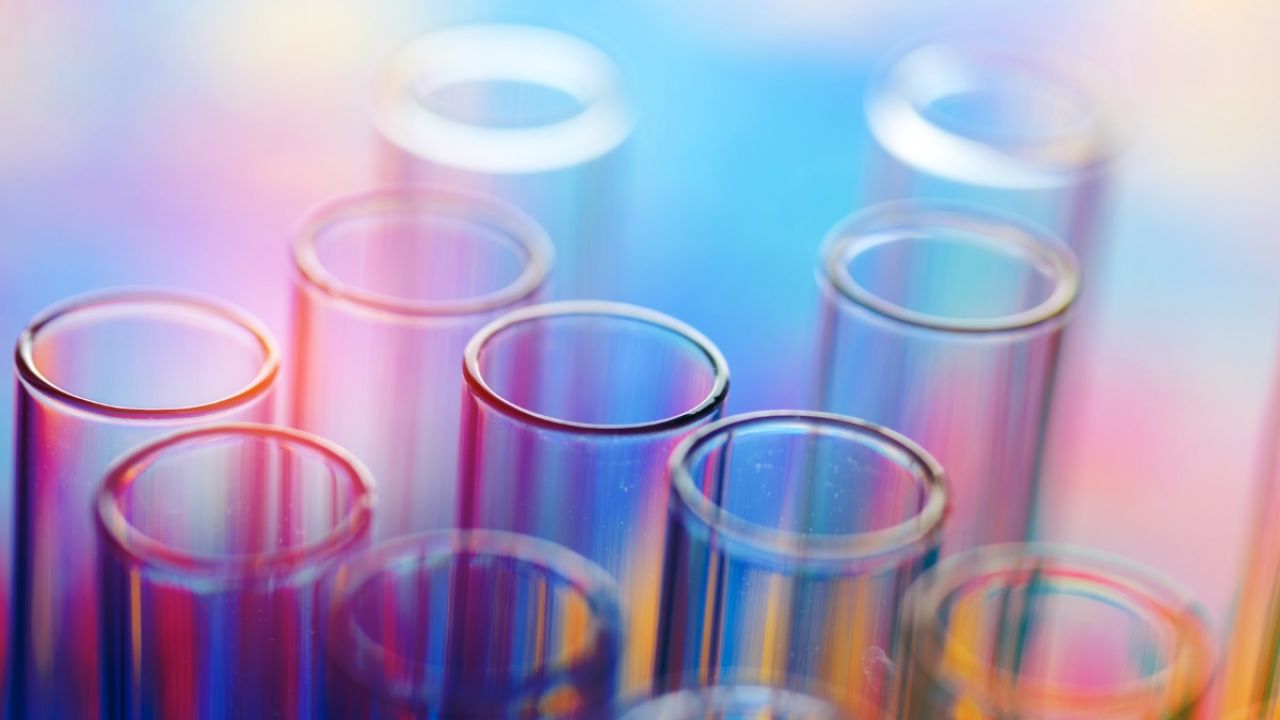 The fluorinated chemicals called PFAS, for per- and polyfluoroalkyl substances, are a class of synthetic, toxic and persistent chemicals used in more than 1,000 consumer and industrial products and applications. After revelations of their health hazards surfaced, the two most notorious PFAS compounds – PFOA, formerly used to make DuPont’s Teflon, and PFOS, formerly an ingredient in 3M’s Scotchgard – were phased out under pressure from the Environmental Protection Agency.

They have been replaced by a new generation of structurally different PFAS compounds that the chemical industry claims are safer. But the more we learn about these replacements, the more the evidence mounts of their close similarity to the phased-out compounds, and of the concerns they share with first-generation PFAS about health hazards and contamination of our bodies and the environment.

This science review details what we know and what we are still learning.

Structurally, all PFAS are made of molecules containing carbon and fluorine atoms directly attached to one another, providing an extremely strong bond. Although these bonds enable PFAS to repel water and oil, they also make PFAS environmentally persistent, which means they are extremely resistant to degradation – the reason they are often described as “forever chemicals.”

In the early 2000s, PFAS were effectively split into two groups – so-called long-chain compounds, like PFOA and PFOS, which were being phased out, and the new generation of short-chain compounds. The difference lay in the number of carbon atoms in their structure.

Well-studied PFAS, such PFOA and PFOS and other long-chain compounds, are known to pose a risk to the health of animals and people, including harm to the immune system, such as reduced effectiveness of vaccines; harm to development and the reproductive system, such as reduced birth weight and impacts on fertility; increased risk of certain cancers; and effects on metabolism, such as changes in cholesterol and weight gain.1

Several of these health harms have been observed in thorough, well-executed epidemiological studies that measure exposure to PFAS in humans, as well as controlled laboratory studies in animals. For example, the C8 Health Project studied nearly 70,000 residents in the mid-Ohio River valley whose water was polluted for decades with high levels of PFOA from a DuPont manufacturing plant. (C8 was DuPont’s internal name for PFOA.) The study determined PFOA exposure was linked to six major health problems, including kidney and testicular cancer, ulcerative colitis, thyroid disease, high cholesterol and pregnancy-induced hypertension.

Multiple government agencies, including the EPA, the National Toxicology Program and the Agency for Toxicological Substances and Disease Registry, have noted that other long-chain PFAS similar to PFOA and PFOS, like PFNA and PFHxS, as well as short-chain PFAS used to replace them, such as GenX, PFBS and PFHxA, can cause similar health effects in animals, with some epidemiological studies reporting similar findings. EPA toxicity assessments of short-chain PFAS have found similar toxicity for both the replacement GenX and its predecessor PFOA, and for PFBS and phased-out PFOS.2

Short-chain PFAS – GenX, PFBA, PFBS, PFHpA, PFPeA, PFPeS, 6:2 FTSA and PFHxA – are commonly detected in drinking water and other environmental samples. EWG scientists reviewed government agency toxicological reports and searched the peer-reviewed literature for toxicity data available for these replacement compounds. In recent years, the number of studies on replacement chemicals has increased. However, particularly for short-chain PFAS, there are limited data for the health harms associated with long-chain PFAS, such as immune system effects. Where data are available, multiple short-chain PFAS appear to behave much like their long-chain counterparts. 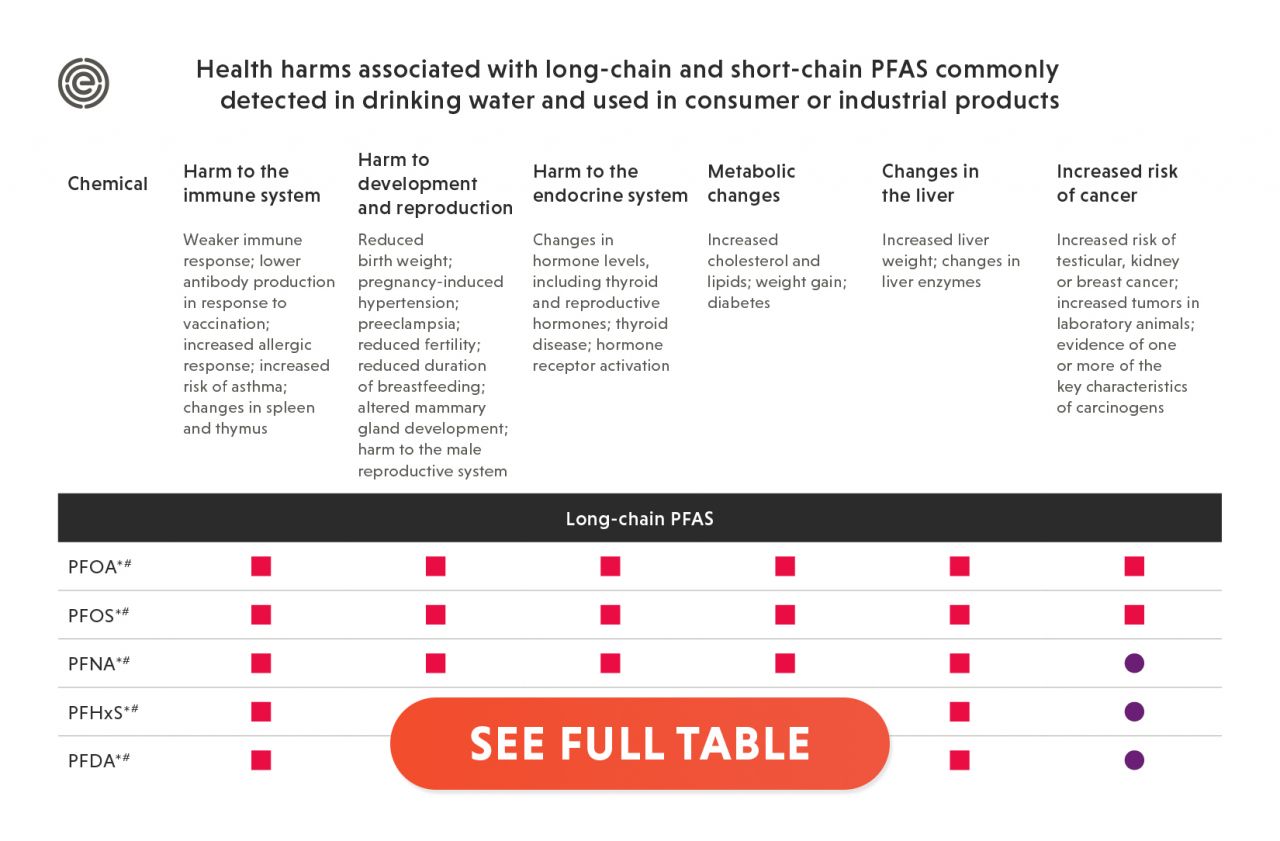 For instance, PFOA and PFOS cause immunosuppression in animal studies, as well as reducing the effectiveness of vaccines in humans.3 For PFBS, a short-chain replacement chemical, comparable animal studies do not exist, yet studies in human cells indicate PFBS decreases cytokine levels, suggesting PFBS may also alter immune function.4 Human studies indicate an association with other immune outcomes, including a connection between asthma and PFBS exposure.5 A recent study found that a higher level of PFBA in the blood is associated with more severe Covid-19 infection.6 PFBA is similar in chain length to PFBS. In animal studies, GenX, the PFOA replacement chemical, can cause immunosuppression similar to that of PFOA.7

Similarly, epidemiological studies show an association between testicular cancer and male reproductive toxicity and exposure to PFOA and PFOS.8 A recent study investigated changes in the reproductive hormone levels of offspring of mothers’ exposure to short-chain PFAS, PFBS and PFHpA, and identified similar findings previously described for PFOA and PFOS.9 The National Toxicology Program performed 28-day toxicity studies in rats with long- and short-chain compounds, including PFBS, PFHxS, PFOS, PFHxA, PFOA, PFNA and PDFA, to compare their toxicity. They found that all PFAS affected the same target organs, including the thyroid and the liver, decreasing thyroid hormone levels and increasing liver weight and liver enzyme activity.10, 11

EWG scientists evaluated 26 different PFAS to determine whether they exhibited molecular mechanisms that can contribute to cancer development, much like other chemicals known to cause cancer. Through what is known as the “key characteristics of carcinogens” approach, the data indicated that every substance displayed at least one of the main qualities of carcinogens, primarily that they “modulate receptor-mediated effects,” and up to five different key characteristics of carcinogens, in the case of the well-studied long-chain PFAS.12

Both PFOA and PFOS have been shown to cause cancer in animals, with early life exposure to PFOA showing greater sensitivity to cancer development than adult exposure. In human studies, both PFOA and PFOS have been linked to cancer, including kidney, testicular and breast cancer.13 GenX was also shown to cause tumors in animal studies, and an EPA toxicity assessment of GenX showed it caused health effects similar to those caused by PFOA, such as harm to the immune system and the developing fetus.14

Biomonitoring conducting by the Centers for Disease Control and Prevention as part of the Nutrition Health and Examination Survey, or NHANES, showed that PFAS can be detected in the blood of nearly all Americans. Long-chain PFAS can remain in the body for years, whereas some short-chain PFAS can be eliminated from the body more quickly and are less likely to build up in organs.

However, though they are not commonly detected in blood, short-chain PFAS – including PFBA and PFHxA – have been detected in human organs, including the lung and the brain15 and PFHxA and PFHpA were also found in a majority of breast milk samples.16 Recent CDC biomonitoring studies detected the short-chain replacement chemicals PFHxA, PFBA, GenX and PFHpA in 22.6, 13.3, 1.2 and 1.1 percent of the general U.S. population, respectively.17 Furthermore, EWG tests found other short-chain PFAS have been detected in finished drinking water samples around the country. Short-chain PFAS have been shown to cross the placental barrier more readily, thereby exposing the developing fetus to potentially higher levels of these compounds than maternal exposure.18

Short-chain PFAS have been touted by the chemical industry as safer alternatives to the chemicals they are replacing, largely because they may be eliminated from the body more quickly. For example, the industry argued that the food packaging chemical 6:2 FTOH was safer than its long-chain counterpart, in part because it is metabolized into PFHxA, which has a short half-life in humans. But as studies by the Food and Drug Administration reported, 6:2 FTOH is more toxic than previously thought, largely because of the presence of additional breakdown products that can bioaccumulate in certain tissues.19 6:2 FTOH itself can cause harm to the immune system, the thyroid and mammary gland and has also shown potential carcinogenic effects in animals.20

Importantly, local communities where industrial discharges of short-chain PFAS have occurred, or where people have worked at industrial or military facilities that use PFAS, may be particularly vulnerable to exposure to these compounds. For example, the PFAS manufacturer Solvay detected high levels of a PFOA replacement chemical it manufactures, chloroperfluoropolyether carboxylate, a short-chain compound, in its workers. Solvay’s toxicity studies also show the replacement chemical to be more toxic than PFOA and PFOS in animal studies.

As EWG research continues to show, the more you look for PFAS, the more you find them, and our map of PFAS contamination in the U.S. continues to grow with drinking water and military sites contaminated by legacy and replacement PFAS. Long- and short-chain PFAS have also been detected in rainwater.22

Long- and short-chain PFAS can also contaminate soil and have been detected in vegetables, which can absorb PFAS from areas where they are grown. Short-chain PFAS are absorbed into the edible portion of some vegetables, such as lettuce leaves, more readily than the long-chain compounds.23 PFAS may end up in soil, fruits and vegetables from irrigation using contaminated water, from contaminated biosolids used to treat crops, or from PFAS depositing into soil from nearby air emissions, possibly from incineration practices, thus highlighting several problems with current practices in PFAS disposal.24

Research by other groups also illuminates the vast world of PFAS contamination in our environment, which can reach even the most pristine and remote landscapes, including Mt. Everest25 and Arctic polar bears.

There are currently no federal drinking water standards for PFAS and only a drinking water health advisory for the two long-chain compounds PFOA and PFOS.

Vermont and Massachusetts have set enforceable state standards of 20 parts per trillion, or ppt, for a mixture of several PFAS, which includes the short-chain PFHpA. Michigan has a standard for the short-chain compounds PFBS and PFHxA. Ohio and Minnesota have set guidance values for these chemicals, and California has set notification levels for PFBS.

Other regulatory efforts, particularly in California, have made headway in regulating PFAS as a class in certain types of products to prevent further exposure to this group of chemicals. Legislative efforts currently underway target PFAS as a class in children’s products, such as car seats and nap mats, as well as PFAS in food packaging. Vermont recently passed a comprehensive PFAS bill, restricting PFAS in ski wax, firefighting foam, carpets and rugs, and food packaging.

In July 2020, the FDA announced that the industry had agreed to a phase-out of the short chain PFAS called 6:2 FTOH – commonly used on food packaging – based on FDA scientific reviews that found 6:2 FTOH more toxic and bioaccumulative than previously thought.

Given the similarities in toxicity and persistence between long-chain and short-chain PFAS, they must be regulated as a class of chemicals and not individually.26