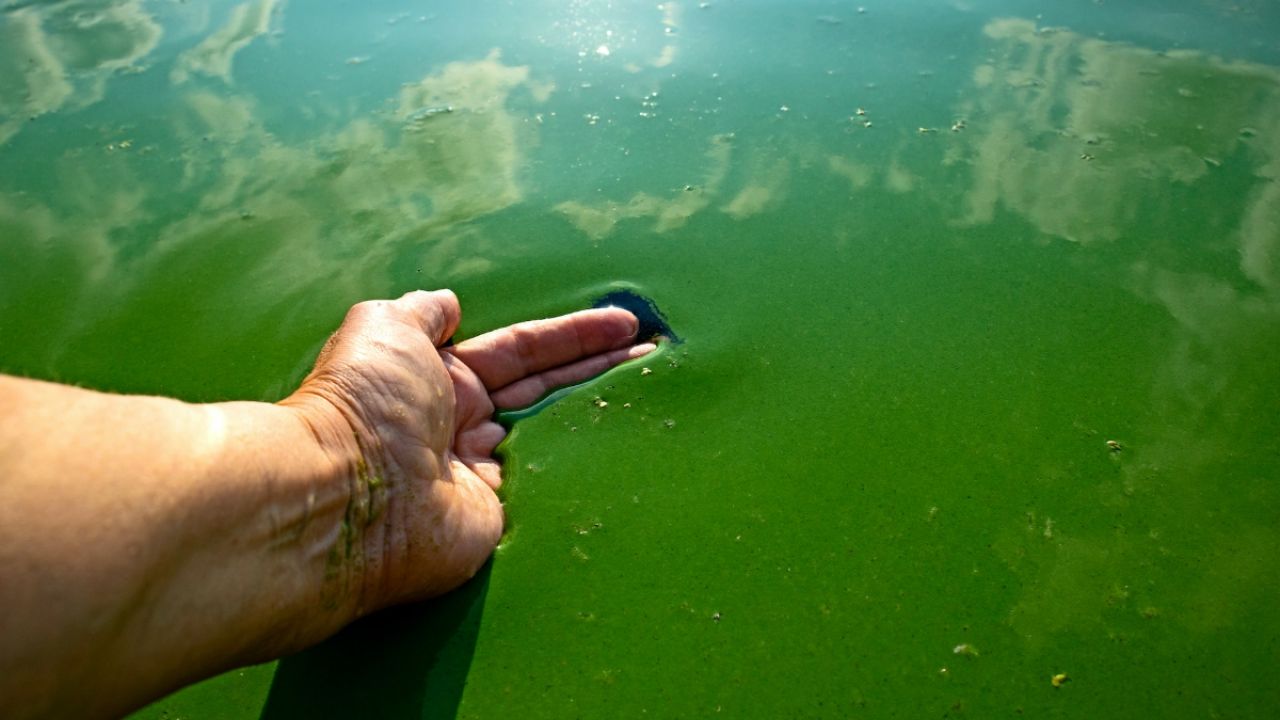 As summer begins, so does peak algae bloom season. Before planning a visit to any beaches, lakes or other bodies of water, make sure to look out for toxic algae outbreaks.

Toxic algae blooms are a growing epidemic, polluting lakes and other waterways, including many used as sources for drinking water, according to a 2018 EWG report. They thrive in the heat and sunlight of summer but can appear at any time, with out-of-season outbreaks becoming a more common occurrence. As temperatures and extreme rain events increase because of the climate crisis, blooms will become more frequent.

Outbreaks occur when nitrogen and phosphorus pollute bodies of water, largely from fertilizer and animal manure in farm runoff. These pollutants trigger the growth of a thick, blue-green goop on the water’s surface, often with a rotten smell and resembling paint or split-pea soup.

Blue-green algae are actually tiny organisms called cyanobacteria. They can produce dangerous toxins that cause many short-term health harms, like vomiting, diarrhea and sore throat, as well as longer-term damage, including liver failure and cancer.

People are commonly exposed to such toxins through swimming or playing in polluted water, activities that often happen more in the summer. But newer research shows toxins can also be airborne, posing risks even for those who only sit on a beach or walk near water.

Not all algae blooms produce toxins, and it’s impossible to tell whether one is dangerous by looking at it – laboratory tests are needed to determine toxicity. If you see or smell signs of an algae bloom this summer when visiting a lake, pond or river, try to avoid getting in, or near, the water.

Toxic algae blooms are on the rise, with 2021 having the second-highest number of new outbreak reports since 2010. Outbreaks affect humans and animals alike, resulting in hundreds of emergency room visits, wildlife die-offs, and, in recent years, the death of several dogs each summer.

No government agency tracks algae blooms in all bodies of water across the U.S. A 2020 EWG report revealed problems nationwide with spotty monitoring and inadequate public notification about dangerous water contamination in recreational areas.

To help fill the information gap, EWG tracks all news reports of algae outbreaks that have occurred in the U.S. since 2010 and archives them in our interactive algae news report map.

Tracking news reports about algae blooms, rather than actual bloom occurrences, doesn’t capture all outbreaks. But it’s the best proxy we’ve found, due to the lack of official data.

EWG will update our algae bloom news report map throughout the summer, typically every two weeks. Checking the map, or contacting local, county or state health departments before you visit a body of water, can help you have a safe summer without any algae bloom exposures.