Toxic Beaches: Bacteria and Algae Triggered Hundreds of Closures and Warnings This Year

Either toxic algae or potentially dangerous fecal bacteria forced the closure of at least 116 U.S. beaches this spring and summer and triggered health warnings at 162 more, according to a new analysis by the Environmental Working Group.

We found inconsistent terminology, unclear guidance and uneven efforts to convey the warnings to the public, revealing troubling gaps in how waterborne risks to human health are monitored and disseminated. The need for a nationwide beach monitoring program is clear, but so is the need for tougher, enforceable regulations to control agricultural runoff – one of the primary causes of algae and bacteria outbreaks – into the nation’s rivers, lakes and oceans.

Toxic algae outbreaks are caused when some algae blooms – which are actually microscopic organisms called cyanobacteria – emit toxins that are dangerous to humans, pets and wildlife. There are hundreds, if not thousands, of different such toxins, but the group that is monitored the most are microcystins.

Microcystin seems to be the most common type of cyanobacteria toxin in the U.S., which is why scientists and others who monitor water quality for toxic algae outbreaks often test only for certain strains of microcystin. Not all algae outbreaks are toxic – the only way to know for sure is to test the water. And toxic algae can exist even when there isn’t a visible outbreak.

EWG tracks all news reports of algae outbreaks that have occurred in the U.S. since 2010. Since no entity tracks algae blooms, this is the best proxy we’ve found, but it’s surely incomplete, since many outbreaks simply aren’t covered in the news media.

The bacteria that spurred the swim advisories and other warnings EWG tracked were E. coli and enterococci. Enterococci is a group of bacteria, and E. coli is a specific type of fecal coliform bacteria.

Both enterococci and E. coli normally live in the digestive system of healthy humans and animals and cause no harm or illness in either their hosts or in the environment. But some strains can cause vomiting, diarrhea and even death. Some species of enterococci can cause infections in the blood or heart, as well as meningitis and other serious health problems.

The presence of enterococci or E. coli in water is often considered an indicator of dangerous contamination, which means that other waterborne fecal pathogens, such as giardia or cryptosporidium, might also be present. 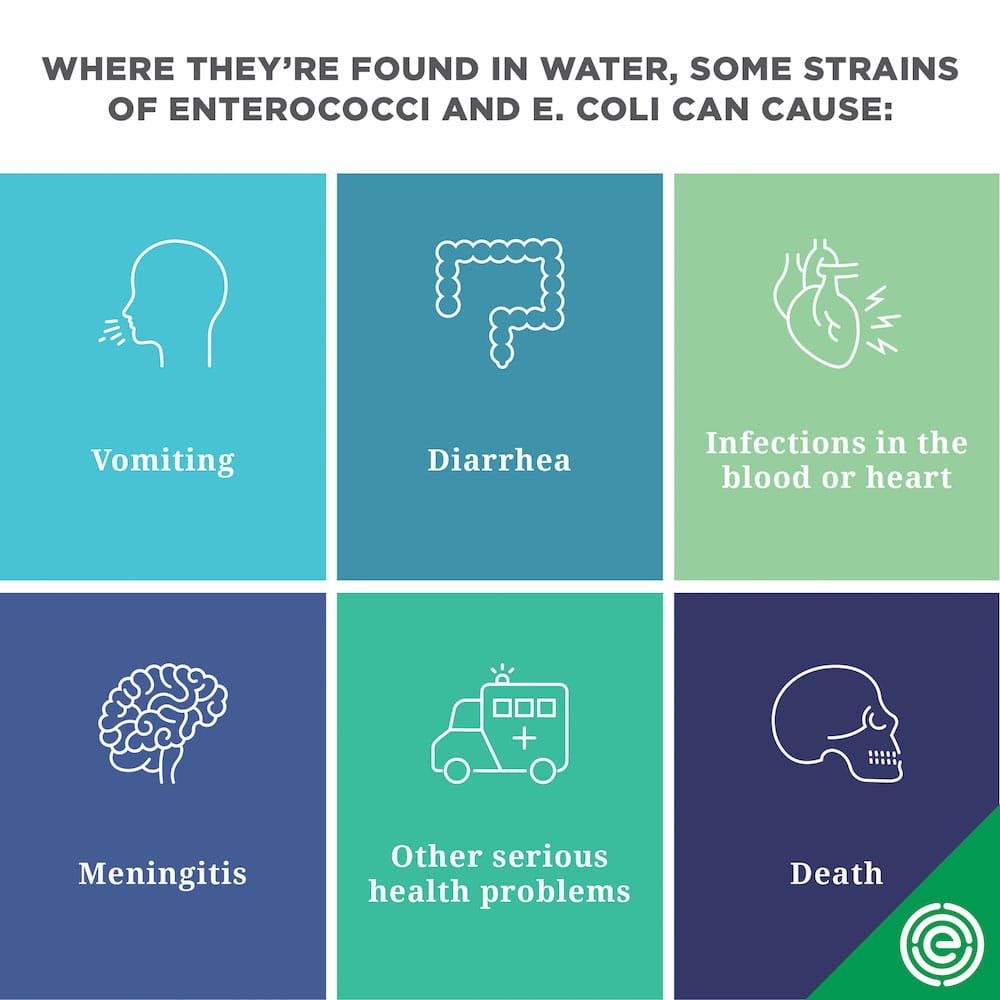 Conveying Danger to the Public

To notify the public about potentially dangerous water contamination in recreational areas, public agencies may rely heavily or solely on signs posted at the affected beach, with no way for people to find out about a problem without actually going there in person and reading what’s posted.

Even when they’re posted online, many official warnings are ephemeral. A swim advisory may be announced on a government website but removed several days later when new tests show the contamination is gone.

Very few government databases or websites seem to archive previous warnings. Some groups, like the Iowa Environmental Council, try to fill this void by maintaining their own archives of beach advisories issued by the state Department of Natural Resources.

Even when states archive warnings online, as Michigan has, the user interface can be difficult to use. The Michigan BeachGuard System website is geared toward current closures, making it tricky to garner accurate and complete data about past contamination issues, as Grand Rapids Gazette reporter Garret Ellison recently found when he wrote about this year’s beach closures in Michigan. On Sept. 3, he reported that of the closures in the state this year, “causes are listed as ‘unknown’ for more than half.” 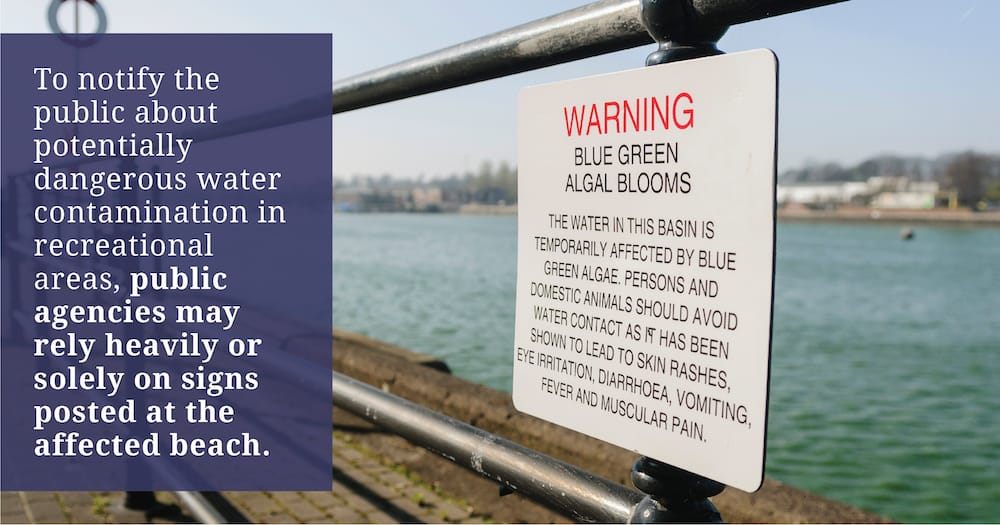 What’s more, some agencies don’t post warnings online, seeming to rely instead solely on press releases issued to the news media. Such a press release may be reported briefly in a local newspaper when the warning is initially issued and not covered again, in spite of ongoing or recurrent contamination. (We didn’t track multiple warnings for the same beach in our analysis.)

It is also possible that some government agencies are reducing water quality monitoring this year as states and cities face budget cuts due to the COVID-19 pandemic and the current economic downturn – for example, in Utah.

Local news outlets across the U.S. have been hit hard in recent years by mergers, layoffs, furloughs and newspaper closures. Fewer reporters now cover more issues than ever for fewer outlets. Inevitably, many local stories simply aren’t being covered – including, we suspect, swim advisories and other public health warnings. And in news stories, bacterial or toxic algae contamination is often covered as a local issue, missing a broader or regional problem. 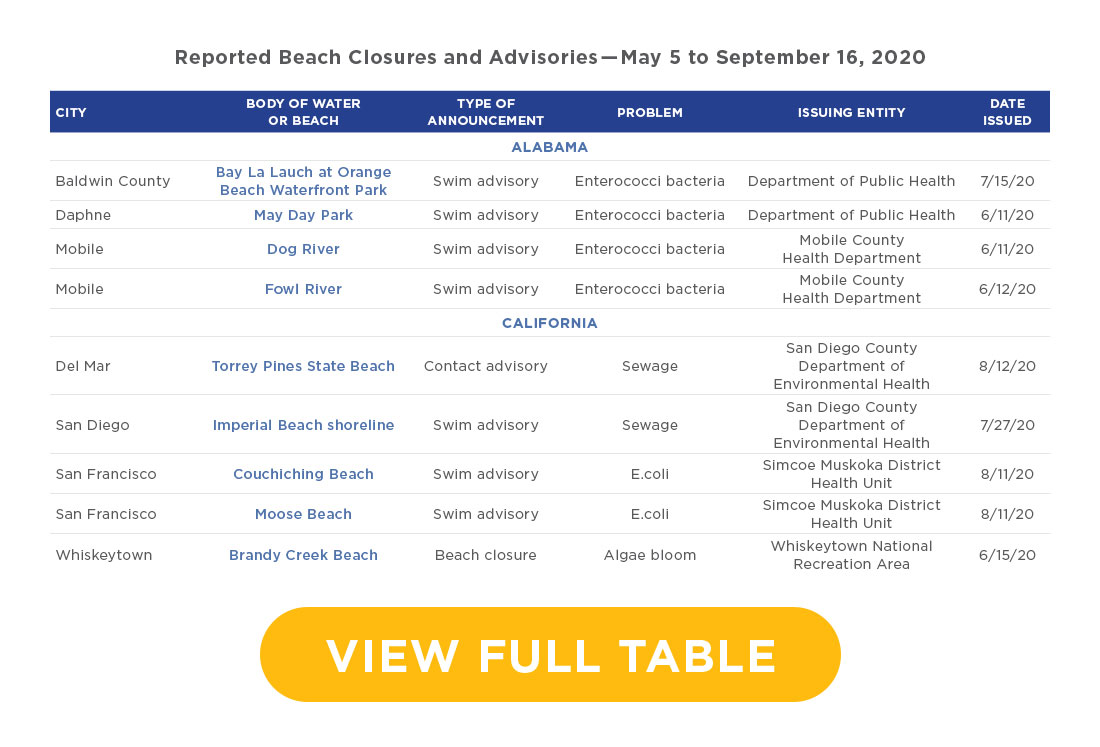 An Uncoordinated Patchwork of Oversight

To investigate the extent to which the public is warned of dangerous conditions in recreational waters, we monitored the websites of health departments and other governmental websites for changes in a sampling of nine states in the Upper Midwest and along the Gulf Coast: Florida, Illinois, Iowa, Louisiana, Minnesota, Mississippi, Nebraska, Ohio and Wisconsin. We also used Google Alerts to track media mentions and, to the extent possible, public agency press releases, across the entire U.S. Finally, we pulled from MLive’s overview of 2020 Michigan beach closure monitoring data.

At least 96 different entities issued warnings. More than half – 56 – were health officials at the city, county, region or state level. Others were cities, the Army Corps of Engineers, state agencies that oversee parks or the environment, and even nonprofit organizations.

Sometimes it wasn’t clear what was actually connoted by a warning, or whether a beach was closed to human activity. And many warnings were vague about their purpose – for example, recommending that people stay out of the water but not why going into the water could be unsafe.

We grouped beach closures and warnings into five main health threats. E. coli, enterococci bacteria, sewage and unspecified bacteria (either E. coli or enterococci) were the causes of beach closures due to bacteria. We categorized all beaches that were closed due to algae or microcystin as being closed due to an “algae bloom.” The potential negative health effects of these contaminants were often not adequately explained or even mentioned in the warnings.

Where Advisories Were Issued

Below is a chart of the states where beaches with advisories, closures and other warnings were located. This should not be considered a complete list of all of the public warnings this year.

36 states had bacteria or algae beach warnings or closures

Swim advisories, beach closures and other warnings – and news stories about them – rarely mention the causes or origins of toxic algae or bacterial issues. But farm runoff is a major cause of water pollution across the U.S., as EWG has repeatedly documented.

In many places, manure is used as a fertilizer, often running off fields that are already saturated with fertilizer or simply because precipitation washes it off. This waste contains pathogens like E. coli and salmonella, but also antibiotic-resistant bacteria and chemicals like phosphorus, which causes algae blooms. Lakes and other bodies of water are often contaminated by this runoff, causing problems for humans, pets and wildlife. 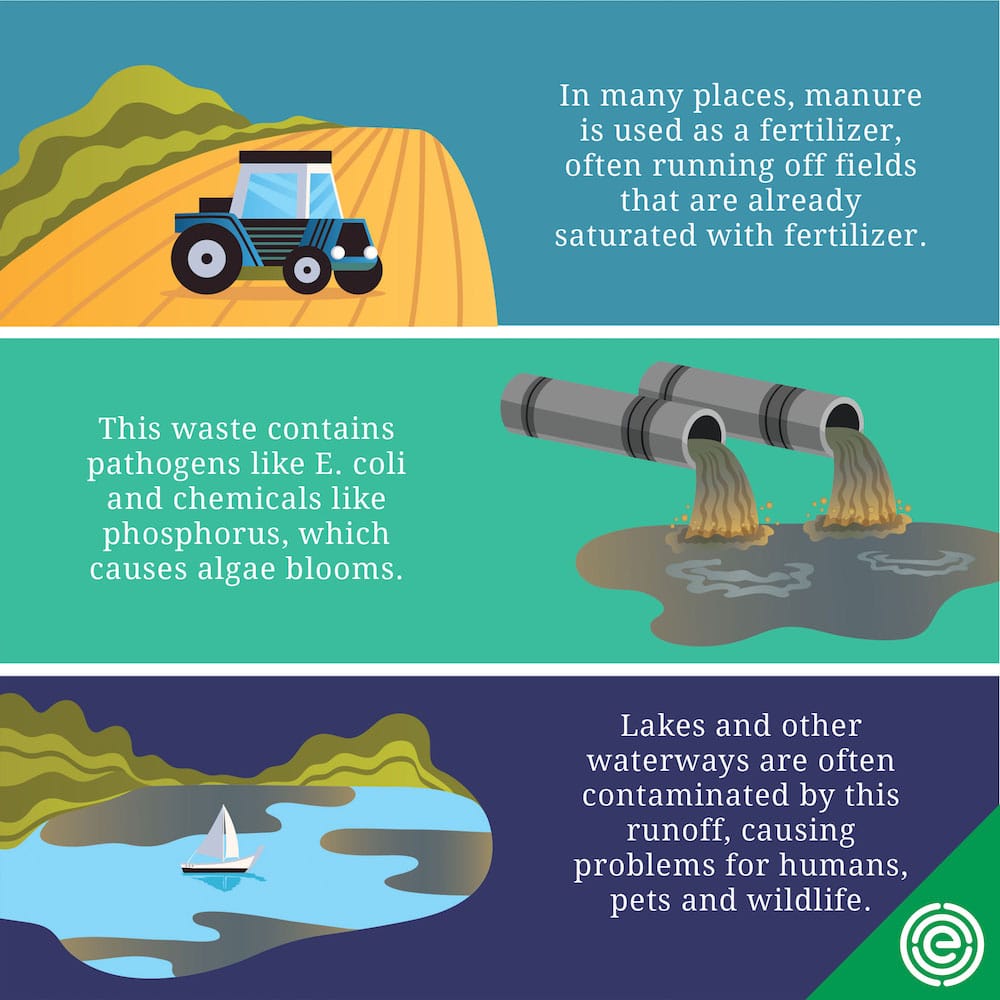 Agricultural runoff is largely not regulated under the federal Clean Water Act – just manure discharges from the largest animal feeding operations. Runoff from farms in the Upper Midwest has been linked to devastating toxic algae blooms in Lake Erie, throughout Iowa, along the coast of Mississippi and elsewhere.

In some areas, other factors for bacterial contamination and phosphorus loading might include septic system leaks, stormwater runoff and outdated combined sewer overflow systems, which dump human sewage into rivers and streams, sometimes after just half an inch of rain.

Algae and Bacteria Together

Because of causes explained above, it is likely that these two different public health threats are co-occurring in many locations. But almost no one seems to be testing for both at the same time.

By comparing our swim advisory and beach closure tracking with the ongoing tracking we’ve been conducting of algae outbreaks throughout the U.S., we can see that toxic algae and fecal bacteria contamination overlap in many places. Many locations with a bacterial issue – 57 in 11 states – have also had toxic algae issues in the past.

Below are the state breakdowns for beaches that have been closed due to bacteria and have also made an appearance on our algae story map. Iowa and Ohio have the most overlap between bacteria beach closures and algae stories.

This report is a preliminary investigation into nationwide water contamination due to fecal bacteria and toxic algae. It provides important insight into the gaping holes in our inadequate beach safety oversight system, but it is not comprehensive. It is certainly missing many sites where public warnings were issued this summer – precisely because there exists no standard system for monitoring water quality at beaches.

The need for a nationwide beach monitoring program is clear. Such a program should provide for:

We also recommend that researchers investigate the co-occurrence of E. coli and toxic algae.

Most importantly, states and the federal government must enact and enforce mandatory regulations to limit and control agricultural runoff. Voluntary conservation is not adequate to protect our waterways from widespread contamination that threatens not just water quality but also human health. It is both easier and cheaper to stop algae and bacterial contamination before it happens, not after the fact.