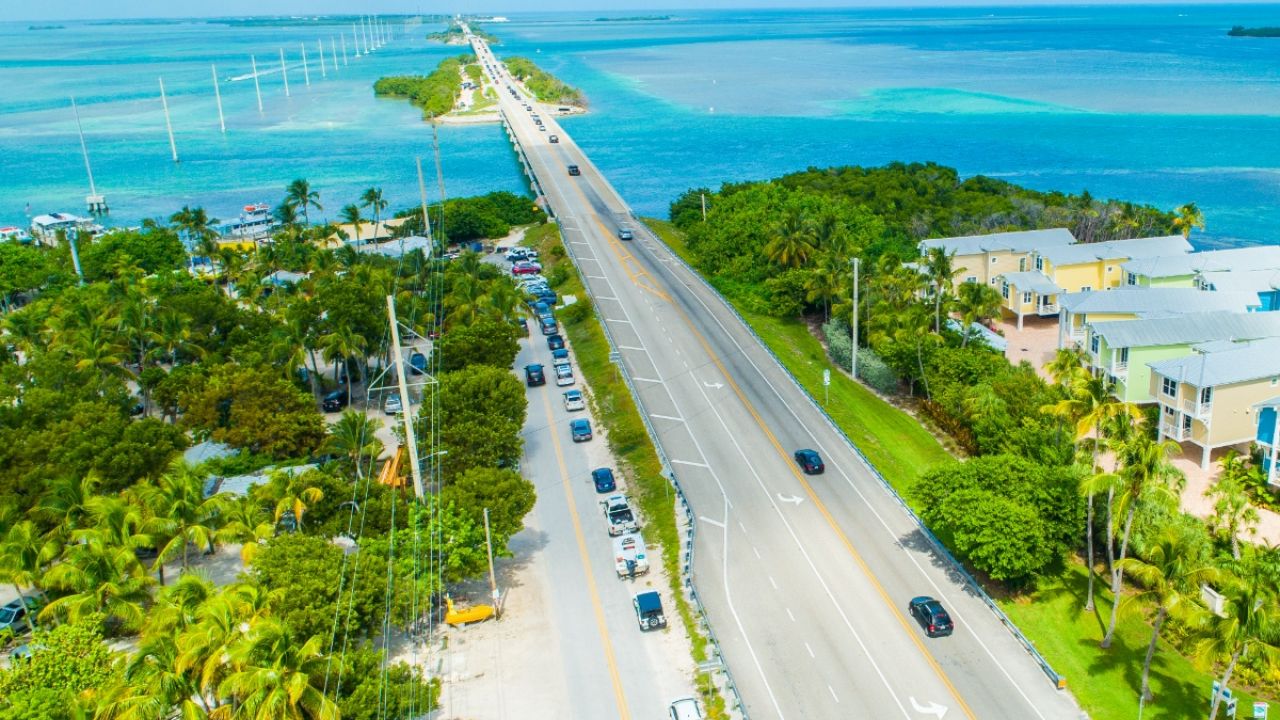 Groundwater from at least 13 Defense Department sites in the Gulf of Mexico region is contaminated with high levels of the toxic “forever chemicals” known as PFAS, according to DOD records obtained by EWG.

The chemicals have seeped into the Gulf of Mexico, adversely affecting Gulf fish, and potentially harming residents’ food supply and livelihoods, if they consume fish contaminated with the chemicals.

The contamination underscores the need for swift PFAS cleanup by DOD, which used these chemicals in firefighting foams despite knowing of their harms for decades.

Although PFAS contamination of the Gulf of Mexico is suspected from hundreds of industrial sites throughout the region, DOD sites are a major source of contamination.

DOD’s records reveal levels of PFAS, including the notorious chemicals PFOA and PFOS, with maximum detections ranging from 718 parts per trillion, or ppt, to 877,000 ppt, in the groundwater at the 13 sites.

The contaminated DOD sites have PFAS detections at levels hundreds of times higher than the standards some states are pursuing to protect human health.

DOD assessments also show that PFAS may be present in the groundwater at several other bases near the Gulf where the department has not published test results to confirm the presence of PFAS, including: 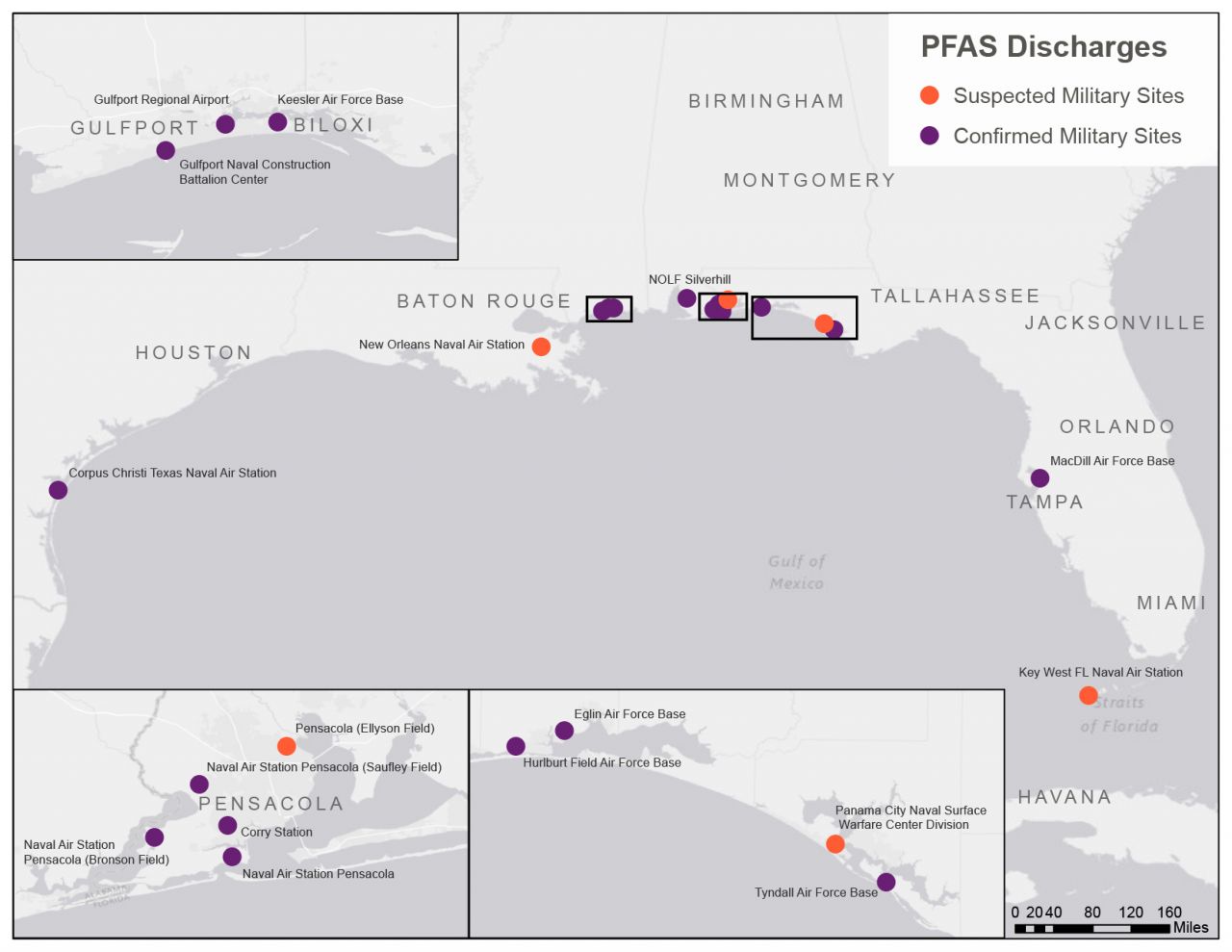 PFAS from these sites could be harming the Gulf of Mexico’s fish, including Gulf oysters, posing potential health risks to anyone who consumes it.

There are no federal guidelines establishing a safe level of consumption of PFAS in fish or seafood.

Earlier this month, the Environmental Protection Agency, collaborating with the DOD, published its first draft national standard for testing fish for PFAS.

In 2019, the Food and Drug Administration created its own tests for the presence of 16 PFAS in foods across eight mid-Atlantic states, focusing on the most commonly consumed foods available in grocery stores, not locally caught fish or raised foods. The FDA detected PFOS in half of the fish sampled.

The most recent FDA tests from 2021 found PFOS in both fish samples. Fish from the Gulf of Mexico was likely not included.

At least one study revealed troubling levels of PFOS, the primary ingredient in firefighting foam, in Gulf oysters. The study found high PFOS concentrations in oysters harvested within a few miles of several DOD installations bordering the Gulf of Mexico.

Other studies are currently underway to examine the effects of PFAS bioaccumulation on oyster populations and physiology.

The European Food Safety Authority, or EFSA, set a consumption threshold of 4.4 ng/kg of body weight per week for the combined exposure to PFOA, PFOS, PFNA and PFHxS. For a 160-pound person, a safe level of exposure to these four PFAS in food for an entire week would be 319 ng.

A recent study on releases of PFAS-contaminated firefighting foam building up in fish and oyster populations near Galveston Bay, Texas, showed significant amounts of PFOS in muscle and liver tissue in the months following foam releases. More than 15 percent of fish samples had levels of PFOS above the EPA threshold at which causing toxicity is likely.

EFSA’s new standard for PFAS in food is based on new research showing that exposure to PFAS reduces vaccine efficacy, which is the most sensitive human health effect, according to EFSA scientists.

Several states, including Alabama, are now publishing guidelines to limit consumption of fish contaminated with PFAS.

The potential threat to Gulf fish from PFAS contamination at DOD sites is a local example of a national problem. The chemicals have been detected at more than 300 military installations across the U.S., and they may be present at hundreds of other military sites.

The primary source of PFAS at military bases is the firefighting foam called aqueous firefighting film-forming foam, or AFFF, developed by DOD in the 1960s and first required by the Navy and the Marine Corps in 1967. Legacy formulations of AFFF, used for decades, contained PFOS and PFAS precursors that can break down into PFOA and other toxic PFAS.

A need for PFAS tests at DOD sites

Newer PFAS in replacement firefighting foams have been linked to many of the same health effects as those from PFOS, leading Congress to direct DOD to phase out the use of fluorinated foams altogether by 2024.

In July, DOD's inspector general faulted the department for moving too slowly to address the PFAS contamination crisis.

The same month, the Senate Armed Services Committee included provisions in the National Defense Authorization Act for fiscal year 2022 to set deadlines for PFAS testing and reporting at DOD sites.

In September, the House Armed Services Committee included similar deadline and reporting provisions as well as providing $549 million to finance DOD cleanup efforts. The House bill also phases out household uses of PFAS by the DOD.