WASHINGTON – The soil, groundwater and surface water of an additional 59 military installations across the U.S. are contaminated with the toxic “forever chemicals” known as PFAS, according to Defense Department records obtained by EWG. This brings the number of affected bases to 385.

The DOD records reveal PFAS levels at the 59 installations ranging from 3.4 parts per trillion, or ppt, to 870,000 ppt in the bases’ soil and water. There are no federal limits on PFAS in soil or water, but some states have moved to limit the most ubiquitous type of PFAS in drinking water to levels as low as 6 ppt in order to adequately protect human health.

In addition to the 385 sites where PFAS contamination is now confirmed, DOD’s data also show suspected contamination in groundwater at 294 additional installations.

A total of five installations identified by the new EWG analysis are among the department’s sites with the highest PFAS detections in their soil or groundwater in the country, the records show.

Other DOD locations with high PFAS detections include the Washington Navy Yard, in Washington, D.C., and the Air Force Academy, in Colorado.

“Toxic PFAS are in the blood of nearly every American,” said Jared Hayes, EWG policy analyst. “Every time we test for PFAS, these forever chemicals are detected. I expect we’ll soon be confirming more military sites polluted with PFAS.” 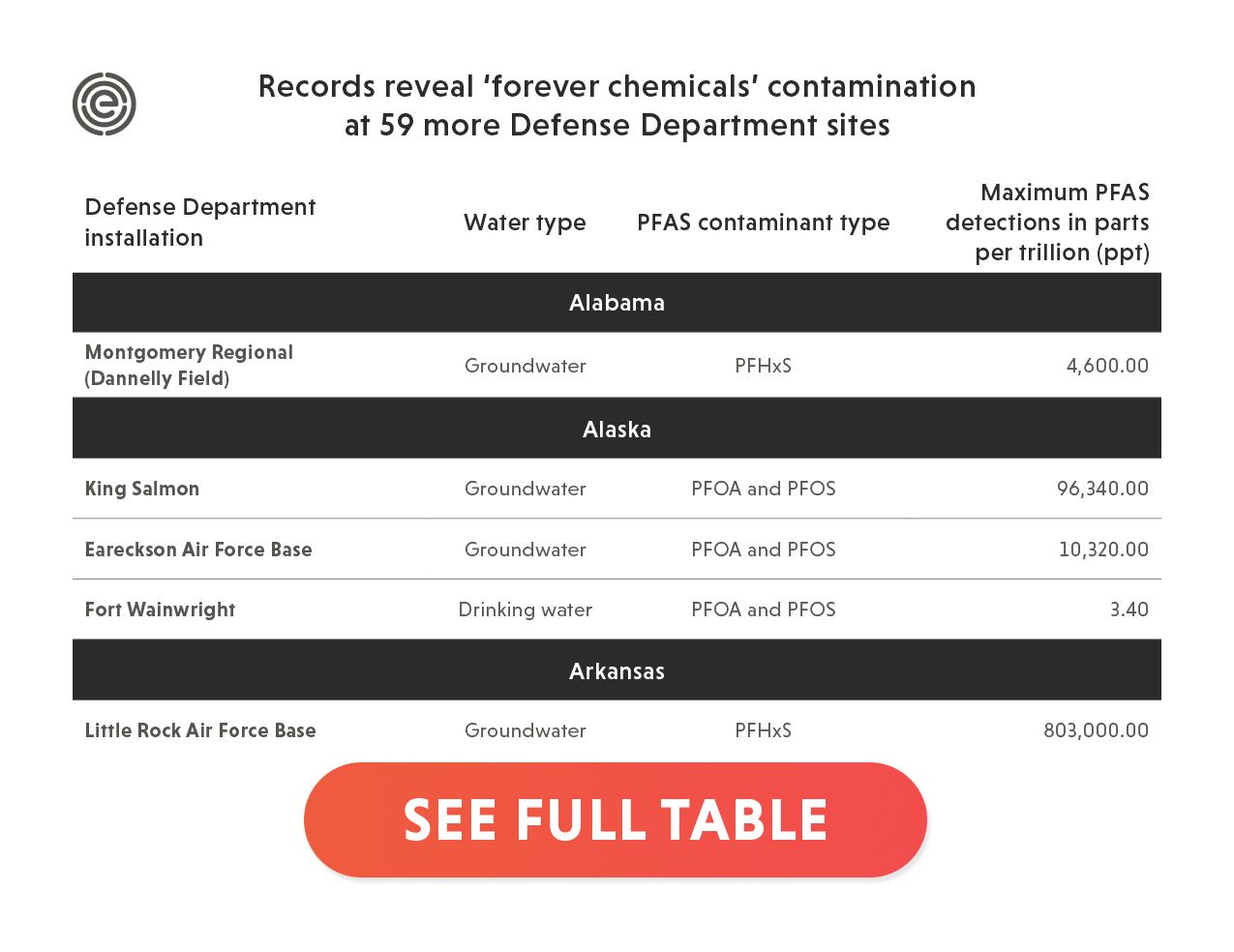 DOD has known for years about the risks from PFAS

The primary source of PFAS contamination at military bases is aqueous firefighting film-forming foam, or AFFF, developed by DOD and 3M in the 1960s and first required by the Navy and the Marine Corps in 1967. Legacy formulations of AFFF, used for decades, contained PFOS and PFAS precursors that can break down into PFOA and other toxic PFAS.

In 2000, DOD learned that 3M planned to stop making AFFF, after the company’s internal studies showed evidence of its health hazards. A 2001 DOD memo concluded the main ingredient in AFFF was “persistent, bioaccumulating, and toxic.” Months later, an Environmental Protection Agency official reiterated to the DOD the risks posed by PFOS and the entire class of PFAS.

“DOD knew about the potential risks of these chemicals for years and did not act,” said Hayes. “And now hundreds of bases have high levels of PFAS contamination.”

Newer PFAS in replacement foams have been linked to many of the same health effects as those linked to PFOS, leading lawmakers in Congress to require DOD to phase out the use of fluorinated foams altogether.

And last month, DOD's inspector general faulted the department for moving too slowly to address the PFAS contamination crisis, underscoring the urgency needed to address the issue.