In the Mississippi River region, billions of dollars spent on crop insurance payouts could have been used instead to retire over 300,000 acres of frequently flooded fields

What is the Mississippi River Critical Conservation Area?
What is the federal Crop Insurance Program?
What USDA programs retire flooded cropland?
Methodology
In an area beset by worsening flooding, taking environmentally sensitive land out of production can help mitigate the climate crisis and protect the environment 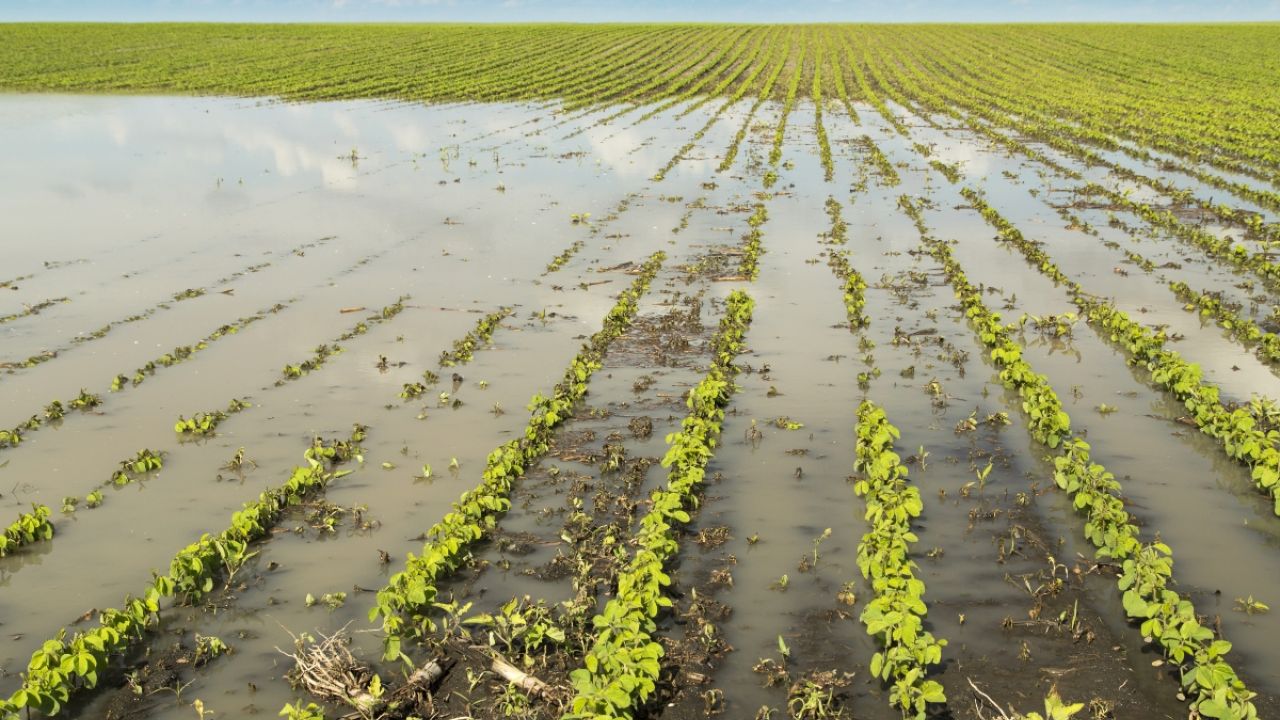 What is the Mississippi River Critical Conservation Area?
What is the federal Crop Insurance Program?
What USDA programs retire flooded cropland?
Methodology

The almost $1.5 billion in federal crop insurance indemnities sent to farmers in the Mississippi River Critical Conservation Area for flooding damage between 2001 and 2020 could have instead taken more than 300,000 acres of frequently flooded farmland out of production.

Putting this much marginal land – an area half the size of Rhode Island – into permanent conservation easements in the 13-state Mississippi River Critical Conservation Area, or MRCCA, would have multiple benefits for the environment, climate mitigation and public health, and would be a better use of taxpayer dollars. Many parts of the MRCCA experience frequent flooding that is getting worse, thanks to the climate crisis.

Those are the latest findings of EWG’s ongoing research into the Federal Crop Insurance Program’s spending. Earlier investigations found that the climate crisis has likely contributed to billions of dollars in crop insurance payouts since 1995 and that MRCCA counties received over $51.5 billion in total crop insurance indemnities between 2001 and 2020. The Crop Insurance Program is managed by the Department of Agriculture’s Risk Management Agency.

What is the Mississippi River Critical Conservation Area?

Also known as the MRCCA, it is a basin of more than 387 million acres across 13 states and 2,300 miles of the Mississippi River. It’s one of eight U.S. regions covered by the USDA’s Regional Conservation Partnership Program, created in the 2014 Farm Bill, and aims to encourage stakeholders in those areas to pursue common natural resource goals while maintaining or improving agricultural productivity. The MRCCA spans Arkansas, Illinois, Indiana, Iowa, Kentucky, Louisiana, Minnesota, Mississippi, Missouri, Ohio, South Dakota, Tennessee and Wisconsin.

Flooding is a major issue in the MRCCA, and the climate crisis is expected to increase the frequency and severity of flooding in this region, likely raising the cost and frequency of flood crop insurance payments. But as EWG has pointed out, crop insurance does not encourage or require farmers to adapt to climate change.

In fact, crop insurance may be discouraging climate change adaptation by subsidizing farmers who farm on frequently flooded lands, because they know some losses will be covered by the program and because they do not pay the full cost of their crop insurance premiums. Taxpayers subsidize, on average, 60 percent.

Through multiple programs, including its Agricultural Conservation Easement Program, the USDA spends money each year to retire and restore frequently flooded, environmentally sensitive land. But the agency turns away nine out of 10 producers who apply to enroll in the wetlands portion of this program.

The Crop Insurance Program should be reformed so that premium subsidies in high-risk areas like frequently flooded fields are reduced. Additionally, more funding should go to conservation programs that pay to take these fields out of production permanently. These reforms would not only be beneficial for the climate, the environment and public health, but also for farmers and communities in the MRCCA.

What is the federal Crop Insurance Program?

The federal Crop Insurance Program gives farmers the ability to buy insurance that covers financial losses they might suffer for a range of problems, including reduced crop prices, flooding and other weather damages. Taxpayers subsidize about 60 percent of the insurance premiums, on average, but the USDA regulates the program, and private insurance companies administer the policies. The insurance “cause of loss” is the main reason for a reduction in crop yield or revenue that triggers a crop insurance payment. Causes of loss are factors that damage crop yield, such as flooding, or decrease the price side of farmer revenues, such as a decline in crop price.

Flooding payments in the MRCCA are widespread and frequent

Crop insurance payments are disproportionately large in the MRCCA, totaling over $51.5 billion dollars between 2001 and 2020. Flooding was the fifth largest cause of loss during this period in the region, and the third largest among weather-related losses, after excess moisture and drought.

Within the MRCCA, there were 41 counties that each received over $8 million in flood crop insurance indemnities between 2001 and 2020. These are the hot spot counties with the most flood outlays, shown on EWG’s MRCCA Crop Insurance Hot Spot Map as the two dark purple colors on the flood layer. 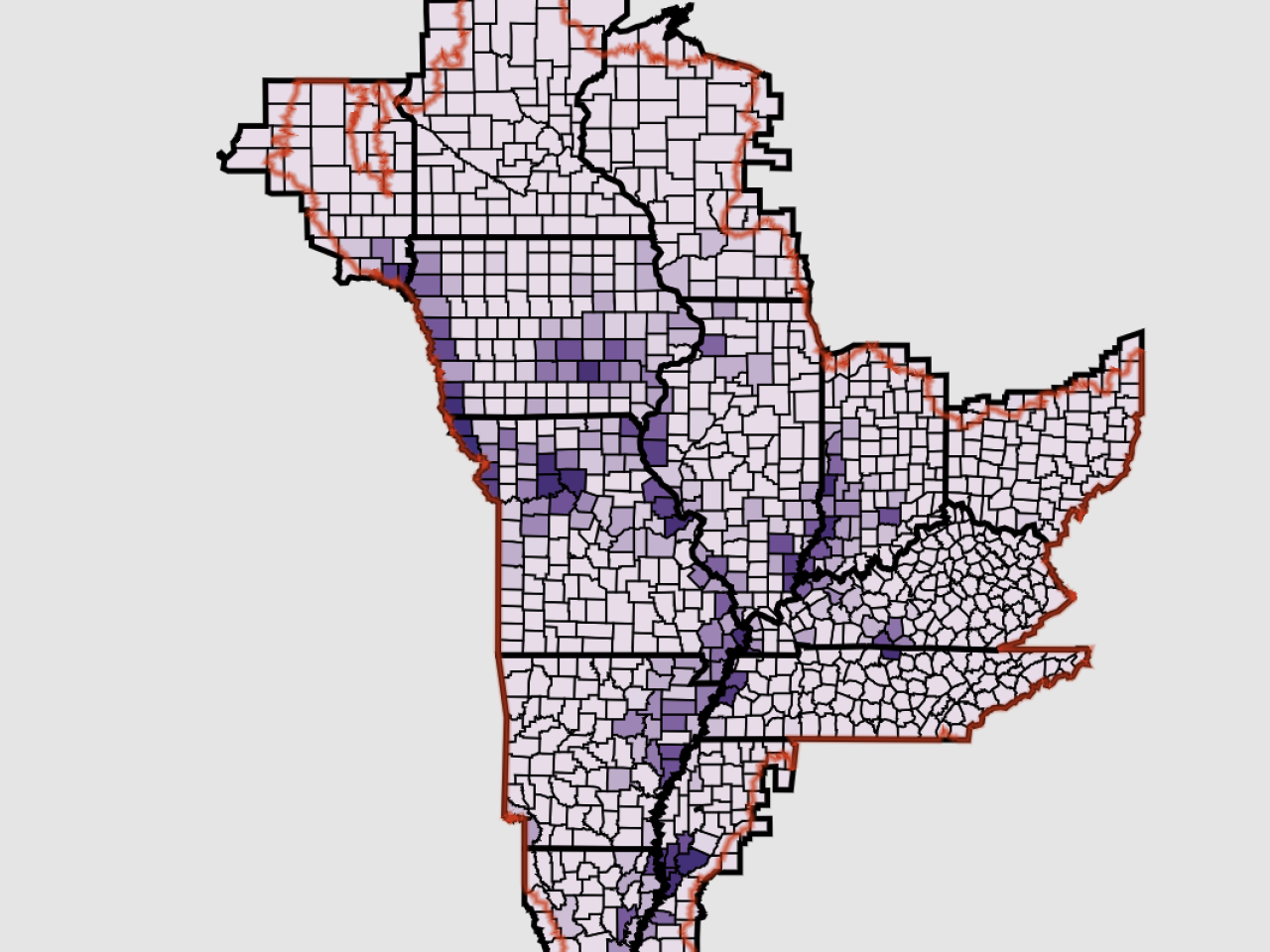 Together, these 41 counties received over $635.8 million in flood indemnities, which represents 44 percent of total flood crop insurance payments in the region. Missouri had by far the most hot spot flood counties, as well as flood indemnities (Table 2).

Payments in the hot spot counties were also frequent. Of the 41 counties, 76 percent received flood crop insurance indemnities in at least 15 of the 20 years, whereas 49 percent got flood payments above the MRCCA county-level average in at least half of the years.

Taxpayer funding that currently goes toward flood crop insurance indemnities could be better spent retiring farmland that is frequently flooded and expensive to insure. Permanent easements prevent designated farmland from being used for crop production, allowing it to be restored to its natural state.

There are significant benefits to retiring and restoring cropland permanently.

Retiring farmland in frequently flooded areas could reduce agriculture’s greenhouse gas emissions and soil erosion, and decrease the amount of agricultural pollution that ends up in drinking water and recreational waters. Environmentally sensitive farmland is also commonly marginal, which means crop yields are low and farmers often barely turn a profit on the land anyway.

Taxpayers could fund hundreds of thousands more acres of permanent easements on frequently flooded cropland if these programs had more funding. Given the average dollar per acre cost of ACEP easements between 2014 and 2020, the $1,429,514,635 in MRCCA-wide flood insurance indemnities could have retired 331,784 acres in the region at the average ACEP cost.

In the 41 hot spot counties, the USDA could have permanently retired 130,259 acres of frequently flooded cropland for the $635.8 million spent on flood crop insurance indemnities between 2001 and 2020, at the average ACEP costs. At the lowest ACEP easement costs per acre in that time, 224,257 acres in the flood crop insurance hot spot counties could have been retired. Even at the highest costs per acre, 74,756 acres of permanent easements could have been established in these counties (Table 3).

Table 3. Many acres in the hot spot counties could have been retired, given the cost of ACEP easements and the flooding crop insurance indemnities that were paid out.

Funding for federal conservation programs that establish permanent easements should be increased so more cropland with repeat flood crop insurance losses can be retired and restored.

Current funding for permanent and long-term easements is much smaller than payments for the crop insurance program and farm subsidy programs. In 2019 alone, national funding for the three easement programs described here was only $800.7 million, even including Agricultural Land Easements that allow cropland to continue being farmed. U.S. crop insurance indemnities across all causes of loss were $10.6 billion.

There are always more farmers who want to participate in the easement programs than funding can cover. In fiscal year 2019, farmers applied to retire more than 408,000 acres through ACEP’s wetland reserve easements, but only 9 percent of all applications were enrolled.

Reform to the crop insurance program itself could help address repeat flood losses. Reducing premium subsidies in high-risk areas like flood plains would give farmers a better idea how much risk they are actually taking on, discouraging them from growing in risky areas vulnerable to extreme weather caused by the climate crisis. Fewer premium subsidies in high-risk areas would mean taxpayers would also encourage less production of crops in environmentally sensitive areas, and reduce taxpayer spending.

A new interactive EWG map highlights county “hot spots” that received disproportionately large and frequent crop insurance payments in the MRCCA. The area encompasses more than 387 million acres across 13 states and 2,300 miles of the Mississippi River.

Read the analysis
By
Anne Schechinger (EWG)
March 23, 2022
We’re in this together

The indemnity data in this analysis come from the USDA Risk Management Agency’s Cause of Loss Historical Data Files, in EWG’s Crop Insurance Database. EWG analyzed crop insurance indemnities between crop years 2001 and 2020 for the 1,017 counties in the MRCCA that received any indemnity above zero during the 20-year period. The MRCCA is a basin of more than 387 million acres across 13 states and 2,300 miles of the Mississippi River.

To evaluate the frequency of payments, we counted how many years each of the MRCCA counties had flood insurance payments above zero. We found the MRCCA county-level average flood payment each year by dividing total MRCCA flood payments in a year by the number of counties. We then evaluated how many years each county had flood indemnities above the corresponding year’s MRCCA county-level average payment.

We then found the average, minimum and maximum costs per acre for the Agricultural Conservation Easement Program, or ACEP. To find these costs, we used the total obligations by state data on a USDA Natural Resources Conservation Service website. For the 41 hot spot counties, we pulled the total obligations and total easement acres enrolled for the 10 states where the hot spot counties were located. To find the average ACEP cost per acre by state, we divided each state’s total obligations across from 2014 to 2020 by the total acres enrolled in that state in those years, for the 10 states.

We then divided the flood crop insurance indemnities paid to the 41 hot spot counties by the average, minimum and maximum ACEP costs per acre, on a state level. For example, 13 of the hot spot counties were in Missouri, with a total of $260,093,609 in flood insurance payments. We divided the $260 million by Missouri’s average, minimum and maximum ACEP costs per acre. For those 13 counties, 51,486 acres at Missouri’s average ACEP cost, 98,336 at the state’s minimum cost and 29,683 at Missouri’s maximum ACEP cost could have been retired for the $260 million spent on flood crop insurance payouts.

We calculated these amounts for all 10 states where the hot spots are located, then found the total number of acres that could have been retired across the hot spot counties at the average, minimum and maximum ACEP per acre costs by adding up each of the 10 states’ potentially retired acres.

We then divided the total 2001-2020 MRCCA flood crop insurance indemnity amount, $1,429,514,635, by the 13-state average, minimum and maximum ACEP costs per acre to find the number of acres at each of those costs that could have been retired for almost $1.5 billion.