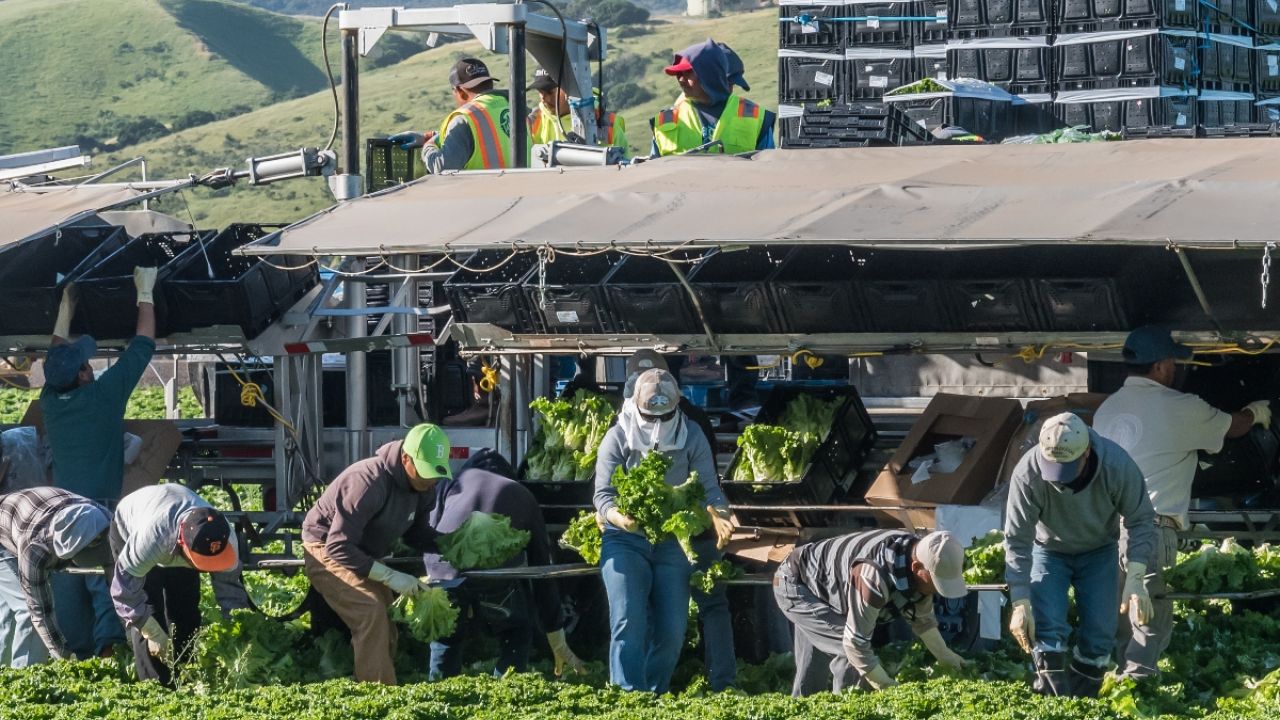 Depending on the season, an estimated 1 million to 2.7 million workers, mostly undocumented, toil on the nation’s farms. Without farmworkers, the American food system would collapse – and during the coronavirus pandemic, they are especially essential to ensuring that food arrives on grocery shelves.

But farmworkers are especially at risk of falling ill from COVID-19. They live and work in crowded spaces, lacking in personal protective equipment or enough room for social distancing. They are exposed to toxic pesticides, contaminated drinking water and air polluted with harmful dust particles and farm machinery exhaust.

The interactive map below overlays confirmed COVID-19 cases with counties estimated to have the highest concentrations of farmworkers, which shows where farm labor is concentrated across the country and the rise in cases of COVID-19 in those areas. Clicking on a county brings up more detailed information. Below we discuss the reasons farmworkers are uniquely vulnerable to the coronavirus. Many Farmworkers Live and Work in Unhealthy Environments

Farmworkers often work in poor, unsanitary conditions, with no room to self-isolate at home. Immigrant workers with H-2A visas – commonly referred to as guest workers – often live in dormitory-style housing with up to 10 or 20 people sharing rooms, bathrooms and bars of soap. Sometimes they live in converted hotels, with several workers sleeping in bunk beds in the same room. Workers often get to and from job sites in shared vans or trucks, making social distancing impossible. Because COVID-19 can spread quickly through airborne droplets or close contact with other people or contaminated surfaces, one case at a work site or dormitory could very quickly infect many people.

In the fields, workers report a lack of hand soap, or hand-washing stations that are too far away to be used frequently. As CNN reported last month, some employers are reducing the number of workers transported on buses and creating more space in between workers in the fields. But workers have raised concerns about inadequate supplies of soap and protective equipment and a failure to enforce social distancing guidelines. Workers have also complained that some companies are providing supervisors, but not workers, with protective masks.

Even before the pandemic struck, farmworkers suffered from poor health. Substandard working and living conditions, lack of money and time to get and cook nutritious food, and seasonal unemployment contribute to high rates of obesity, hypertension, diabetes and high cholesterol. Underlying health problems can put people at higher risk for severe cases of COVID-19.

Farmworkers’ health is further compromised by a lack of access to healthcare because of language barriers, ineligibility for or cost of insurance, lack of reliable transportation, no paid sick leave and limited rural medical facilities. These problems all make it harder to treat underlying conditions and to identify and address emerging health concerns.

Farmworkers Are Exposed to Toxic Pesticides

Farmworkers are often exposed to dangerous pesticides. An increasing array of data shows an association between pesticide exposure and harmful effects on the immune system, as reported in a comprehensive review published this month. For example, organophosphate pesticides are a group of widely used highly toxic pesticides that are known to alter several immune functions in animal studies. People with compromised immune systems are at higher risk of severe cases if infected with COVID-19.

Farmworkers often lack access to clean water. Small rural water systems have fewer customers among whom they can distribute the costs of water treatment and maintenance, making it harder for the system to provide clean water. Under the federal Safe Drinking Water Act, small water systems are not always subject to the same treatment requirements as larger systems. Many small systems are not required to monitor for unregulated contaminants, which makes it more difficult to identify emerging problems.

Many rural families get their water from private wells, which are not regulated by the Environmental Protection Agency. As a result, poor rural farmworker communities often have tap water tainted with agricultural pollution, and state programs to provide safe drinking water often fall short. The problem has been made worse by some shoppers’ hoarding bottled water during the COVID-19 crisis.

The toxic fluorinated chemicals known as PFAS – estimated to contaminate the water systems of 110 million Americans – are also not regulated by the EPA. Studies have shown that exposure to PFAS chemicals can harm the immune system and make vaccines less effective. Some counties with high concentrations of farmworkers have reported high levels of PFAS in drinking water sources.

For example, water samples from municipal wells serving the City of Fresno, in Fresno County, Calif., the nation’s leading agricultural producer, reported a peak of 840 parts per trillion, or ppt, of total PFAS. In the California Water Service-Visalia, in neighboring Tulare County, the second-ranking agricultural producer in the nation, the highest measurement of total PFAS was 271 ppt in a municipal well used for emergencies. Research by EWG and other independent scientists indicates that a safe level of PFAS in drinking water is 1 ppt.

Arsenic is a naturally occurring contaminant, but exhaustive groundwater pumping, common in farming areas like California’s Central Valley, can make the pollution worse. A growing body of evidence indicates that arsenic exposure suppresses the immune system. People with compromised immune systems are more susceptible to dangerous symptoms of COVID-19. ​

Many Farming Areas Have Unhealthy Air

Last month, a study from the Harvard T.H. Chan School of Public Health found that in areas of  heavy air pollution from the microscopic dust particles known as PM2.5, COVID-19 patients are at higher risk of death. The study’s lead researcher told The New York Times that places like the Central Valley are likely to see higher rates of severe COVID-19 cases and deaths. Dusty conditions in agricultural regions contribute to some of the “highest airborne concentrations of particulate matter,” according to Michigan State University toxicologist Jack Harkema.

Farmworkers are also frequently exposed to lung irritants from dust, pollen and crops, which can trigger attacks of asthma, thought to be a risk factor for severe cases of COVID-19.

Industrial agriculture produces two potent greenhouse gases, methane and nitrous oxide. Noxious air pollutants, such as ammonia and hydrogen sulfide, can come from concentrated animal feeding operations. A 2017 study by Dutch researchers showed that air pollution from livestock farms affects workers’ respiratory health as well as that of neighboring residents. Air pollution has been linked to respiratory diseases, asthma and other diseases thought to be risk factors for severe cases of COVID-19.

Farmworkers in regions prone to wildfires, such as California, have likely already suffered respiratory harm from smoke and particulates from recent record-breaking wildfire seasons. Some California farmworkers have reported they were pressured to keep working in smoky conditions. EWG’s review of the top 100 counties estimated to have the highest farmworker populations found high levels of PM2.5 and other pollutants in the air, such as nitrogen dioxide, ozone and sulfur dioxide.

The ranking of the counties with the highest number of farmworkers was based on Department of Agriculture figures for hired labor expenses. The USDA 2017 Census of Agriculture provides data on how much is spent on farm labor by county. This gives an approximate idea of how many farmworkers were employed in each county. In 2018, nearly a third of these counties with high farm labor costs had average annual levels of particulate matter higher than the World Health Organization's recommended guideline for yearly exposure of 10 micrograms per cubic meter.

Even though farmworkers are considered essential workers, they are losing their jobs to the pandemic. Nonetheless, farmworkers have largely been left out of COVID-19 aid packages, with aid instead going to the farmers they work for, who do not have to pass on the aid to their employees. The loss of both work and a place to stay makes it impossible for farmworkers to self-isolate.

Undocumented workers do not qualify for assistance in the COVID-19 aid packages and cannot seek unemployment benefits. For those still employed, the White House is considering cutting farmworker wages. Farmworkers need economic stability and resources to stay safe. They should be given hazard pay, not a pay cut.

As part of the Trump administration’s push for deregulation, the EPA has proposed loosening a rule meant to prevent farmworker exposure to pesticides. The existing rule requires pesticide applicators to take steps to protect everyone within a safety zone from pesticide exposure. If someone is in the zone, spraying must stop until people move to a safe distance.

The EPA has proposed limiting safety zones to the edge of a farmer’s property, rather than the distance necessary to protect workers. The EPA also reversed course on a proposed rule to ban chlorpyrifos, a toxic pesticide linked to neurotoxic effects in children and harm to the immune system.

The Trump administration has also repealed 19 different regulations aimed at improving air quality, including more stringent emissions standards for cars and light trucks. The air and water rollbacks affect all Americans but raise the risks even higher for farmworkers.

As Congress develops new legislation to address the COVID-19 pandemic, it should: