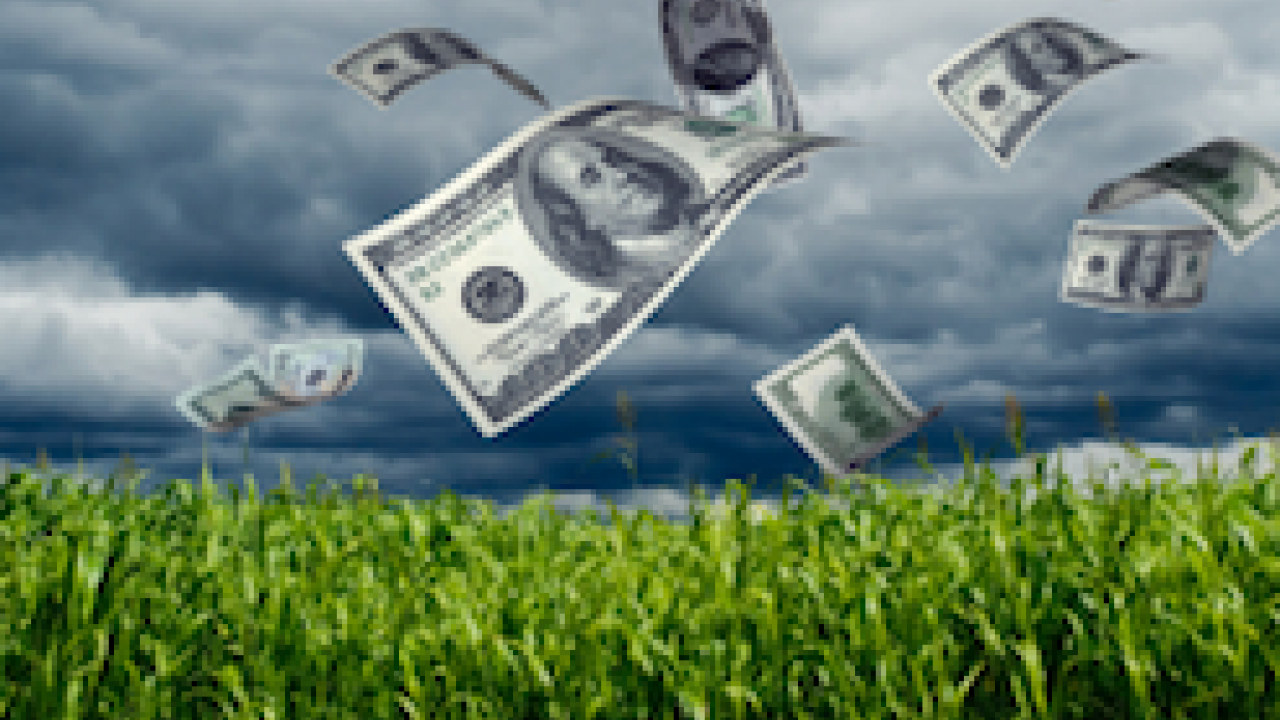 Washington paid out a quarter of a trillion dollars in federal farm subsidies between 1995 and 2009, but to characterize the programs as either a "big government" bailout or another form of welfare would be manifestly unfair – to bailouts and welfare.

After all, with bailouts taxpayers usually get their money back (often with interest), while welfare recipients are subjected to harsh means-testing, time-limited benefits and a work requirement, all in order to receive modest-to-pitiful government benefits that are more or less uniform for every applicant.

None of those characteristics apply to America's farm subsidy system, a sui generis contraption that might have sprung from the fevered anti-government fantasies of tea party cynics if Congress hadn't thought it up first. The most recent beneficiaries – or at least the ones we are still able to track – are disclosed in this latest edition of the EWG Farm Subsidy Database.

With the passage of the 2007 energy bill and the 2008 farm bill, Congress has managed to devise an interlocking maze of subsidies that, taken together, force taxpayers to spend billions of dollars no matter what the condition of the farm economy. First off are the so-called "direct payments" that go out to farmers and landowners even if crop prices and farm profits are setting record highs – and most such records have been set in the past few years – or even if the recipient plants no crop at all. Direct payments have averaged around $5 billion per year since 2005.

Next are the "counter-cyclical payments" that go out when crop prices fall below a level set in law by Congress. These payments have declined from about $4 billion in 2005 to $1.2 billion in 2009 because crop prices have been higher than average over those years. That is a savings of about $2.8 billion.

"Market-loss" payments comprise another type of crop subsidy that slows to a trickle when prices are robust but can gush from the Treasury by the billions when prices dip. The last time that happened, farm subsidy costs topped $20 billion in one year.

Even after the bitterly contested new health insurance reforms eventually take effect, most crops could fairly be said to have better coverage than many people in this country – and it's single-payer coverage, at that (the single payer, taxpayer, being you). Taxpayer subsidized crop insurance is available to farmers if their crop is eligible for coverage in their area, and it provides, at no cost, 50 percent catastrophic coverage to farmers. (In 2008, just four crops – corn, cotton, soybeans, and wheat – accounted for more than two-thirds of the total acres enrolled in crop insurance and for the vast majority of subsidies through the commodity programs).

One thing government subsidies reliably produce, other than ingratitude and a sense of entitlement among their recipients, is a demand for more subsidies. Commodity crop agriculture, for decades now a virtual ward of the federal government by dint of the aforementioned subsidies, offers fresh proof of that maxim each year.

As the farm policy debate raged throughout 2007 and 2008, corn growers made a point of saying that the farm legislation they were focused on would be coming out of out of the congressional energy committees. Sure enough, the resulting 2007 energy bill mandated American drivers to put 15 billion gallons of corn ethanol in their tanks every year by 2015, with accompanying tax breaks to gasoline blenders that already approach the $5 billion spent each year on automatic direct payments. Since not even those government props have been sufficient to maintain profitability, the corn ethanol industry has been laying siege to Capitol Hill and the White House to increase the mix of ethanol in gasoline by 50 percent. Next will come a demand to expand the 15 billion gallon annual mandate to 20 billion gallons or more of corn ethanol. And yes, they'll want continued tax breaks and import barriers with that.

Also in the subsidy queue is a $1.5 billion disaster package that predates the heartrending news of lives lost and property washed away in the southern United States this spring, and it is aimed exclusively at agriculture. An estimated $800 million would be paid out through a 90 percent increase in direct payments, mostly to huge rice and cotton farmers who by definition are already subsidized. They would receive this aid not because their crop was wiped out by bad weather, but because they've lost just 5 percent of it, a far cry from the 30 percent threshold that has been customary in ad hoc farm disaster legislation.

EWG began its research and computer analysis on what has become the Farm Subsidy Database some 17 years ago with the goal of answering a simple question: who is getting the money?

When the database first went online, in 2004, it left no confusion about where the bulk of the billions in taxpayer subsidies went: to the wealthiest and largest farm operations in the country. It was our hope that by laying bare the convoluted laws and the games that individuals and corporations play to maximize their government take, policymakers would feel compelled to reform these programs and better target government assistance to meet desired and stated goals. And let there be no mistake: while some critics may argue that farm subsidies should be eliminated altogether, EWG has always maintained that they have a place, should be focused on small- to mid-sized farming operations with demonstrated economic need, and should have limits to prevent large farms from accumulating such a disproportionate share of the benefits. There are enough technological and economic forces already at work driving the consolidation of farmland ownership and control into the hands of an ever-smaller group of mega-operators. No need for taxpayers to bankroll the demise of the family farm in the name of saving it.

Nor does it make any sense to expect struggling farmers in developing countries to compete against both our farmers and our treasury to scrape together a living in globalized commodity markets.

The improprieties of our farm subsidy system have become such a problem in world trade that the Obama administration recently inflicted a new subsidy affront on U.S. taxpayers. In order to avoid politically awkward reforms in America's cotton subsidies, which have been found to contravene World Trade Organization rules, our government "settled" matters by agreeing to subsidize Brazil's cotton farmers as well, to the tune of a half-billion dollars over the next several years.

It was also clear that commodity subsidies routinely absorbed, not to say wasted, funds that either could be kept in taxpayers' pockets or invested in programs to achieve other, highly desirable public goals. We lack billions of dollars needed to make school lunches healthier, maintain an adequate food safety net for low income Americans, promote local sustainable and organic food systems or tackle agriculture's truly daunting environmental and conservation problems.

In other words, policy should make agriculture more sustainable, should be fiscally responsible, and should be fair and equitable for the diverse interests in the U.S. food and fiber system. It is hard to discern any of those principles in the subsidy lists we publish.

EWG has had some success in upending the romantic perceptions that many Americans have about how their tax dollars are spent on farms and farming. Unfortunately, an examination of the latest data we released today (May 5) reveals a fundamental lack of reform in farm payments.

In a time of growing federal budget deficits and increasing populist anger over government spending, it would seem prudent to trim wasteful agriculture programs. Instead, Congress – at the behest of the biggest agriculture interests representing just five commodity crops – has constructed a system that ensures profits for the largest growers of corn, cotton, rice, soybeans and wheat.

Despite claims of reform, many of the top subsidy recipients in this update are the same operations we've seen before. Six of the top 10 recipients of commodity payments in 2009 were in the top 20 in both 2007 and 2008. Of the top 20, 8 were in the list all three years, and three more were there in 2009 and one other year. In contrast to the public fury over billion-dollar bailouts of Wall Street banks, all 20 top subsidy recipients in 2009 received more than $1 million each, several with multimillion-dollar hauls. And this is only one year's worth of corporate handouts that have gone on for decades.

Federal subsidies flow to a favored few crops as well as a favored few farmers. More than 70 percent ($170 billion over 15 years) of farm subsidies supported the production of just five crops: corn, wheat, cotton, rice and soybeans. Just four of those same favored five - corn, wheat, cotton, and soybean - accounted for more than 70 percent ($25 billion over 15 years) of the cost of crop insurance. The vast majority of farm subsidies go to raw material for our industrialized food system, not to the foods we actually eat. Even less money goes to support the production of the fruits and vegetables that are the foundation of a healthy diet.

Finally, while this corporate giveaway has gone on unabated, conservation continues to be shortchanged. While we don't have the full data for Natural Resources Conservation Service NRCS programs in 2009, in 2008 conservation programs were funded well below their authorized levels. The Environmental Quality Incentives Program alone received $890 million less than its promised level of funding from fiscal year 2005 to fiscal year 2009. Furthermore, conservation has taken a direct hit as a result of the biofuels mandate that has driven up crop prices, causing a boon to commodity farmers and a reduction in price support payments. Enrollment in the Conservation Reserve Program peaked in 2007 – the year Congress passed the new biofuels targets – with CRP payments dropping by 6 percent since then.

Discussions are already beginning on Capitol Hill about what the 2012 Farm Bill should look like, and House Agriculture Chairman Collin Peterson (D-Minn.) has been sending signals that he might be open to some reform-minded proposals.

Past history makes it hard to be optimistic that things will turn out better this time around, but we’re not giving up. Our hope is that Congress and others will pay attention to the disturbing story that unfolds in the EWG Farm Subsidy Database and finally get serious about creating a system that focuses on the needs of small- and medium-sized farmers, strips profit-heavy big agriculture of federal handouts it doesn’t need and does more to address our burning national need for environmental conservation.