EWG News Roundup (3/15): Asbestos in Cosmetics, 100% Renewables Is Closer Than You Think and More 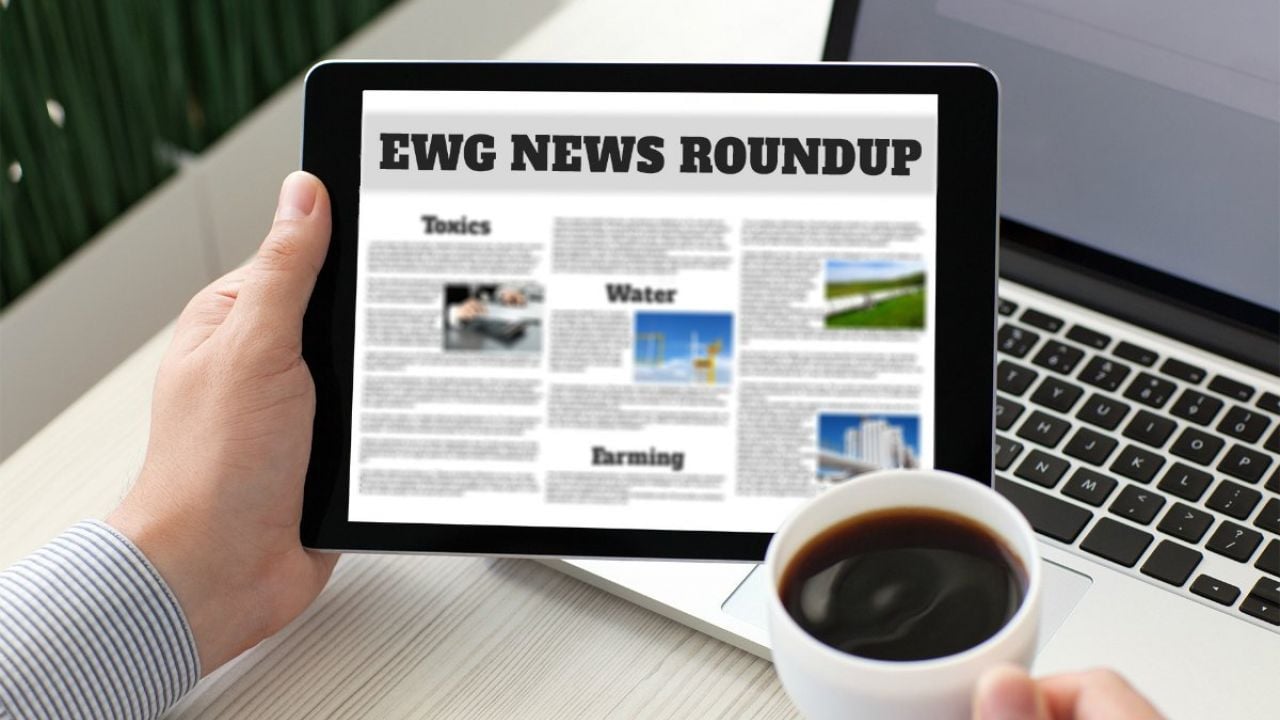 This week, EWG Vice President of Government Affairs Scott Faber appeared before the House Oversight Committee to warn lawmakers that talc-based personal care products may be contaminated with asbestos and called for greater oversight by the Food and Drug Administration. A bipartisan group of House and Senate leaders have introduced or will soon reintroduce cosmetics reform legislation that could go a long way toward fixing this problem.

“EWG has found more than 2,000 cosmetics and other personal care products that contain talc, including more than 1,000 loose powders or pressed powders that could pose a risk of being inhaled,” said Faber. “Even small amounts of asbestos in talc can cause mesothelioma and other deadly diseases, many years after exposure.”

EWG also broke down how transitioning to 100 percent renewable energy, such as what’s being called for in part of the Green New Deal, is both ambitious and reachable – just like the goal of putting a man on the moon.

“In the face of a nationwide drinking water contamination crisis, a broken chemical safety net, and devastating hurricanes and wildfires, a rational and concerned president would seek more funding to protect Americans’ health, keep our environment clean, and combat the threat of catastrophic climate change,” said EWG President Ken Cook. “President Trump did just the opposite, and by now we shouldn’t be surprised. The administration’s budget proposal reflects the president’s top priority: Appease the fossil fuel and chemical industries that have infiltrated the top positions at the EPA.”

One of the aforementioned nationwide drinking water crises is that of per- or polyfluoroalkyl substances, or PFAS chemicals, tainting taps nationwide. Right now, there’s nowhere this crisis is more apparent than on military bases and installations – firefighting foam that contains these chemicals was used on military sites for nearly half a century. This week, the New York Times reported that the Pentagon is pushing the idea that clean-up efforts at these sites should be done to a level 30 times lower than what is recommended by some federal scientists.

And finally, EWG dispelled the myth being pushed by Agriculture Secretary Sonny Perdue and other ag interests that U.S. farmers are being inundated with growing debt. Research by the Department of Agriculture shows quite the opposite – 2019 looks as if it will be a banner year for farmers.

But Ken Cook of the Environmental Working Group says it would work to appease Trump’s political base and boost the fossil fuel and chemical industries.

EPA Administrator Andrew Wheeler called this a "commonsense budget proposal," while advocacy groups like the Environmental Working Group and the Environmental Defense Fund were quick to criticize this latest example of what they view as the Trump administration's apathy toward the environment.

“In the face of a nationwide drinking water contamination crisis, a broken chemical safety net, and devastating hurricanes and wildfires, a rational and concerned president would seek more funding to protect Americans’ health, keep our environment clean, and combat the threat of catastrophic climate change,” Ken Cook, president of the Environmental Working Group, said in a statement. “President Trump did just the opposite.” Reprinted by SFGate.

But the NGO Environmental Working Group (EWG) has declared it a “disaster”. “The administration’s budget proposal reflects the president’s top priority: Appease his hard-right base and the fossil fuel and chemical industries that have infiltrated the top positions at the EPA,” said EWG president Ken Cook in a statement.

"In the face of a nationwide drinking water contamination crisis, a broken chemical safety net, and devastating hurricanes and wildfires, a rational and concerned president would seek more funding to protect Americans' health, keep our environment clean, and combat the threat of catastrophic climate change,"Environmental Working Group President Ken Cook said in a statement about the budget.

CNN: Talc cancer concerns get their day in Congress

Testifying on behalf of the nonprofit nonpartisan environmental organization Environmental Working Group, Scott Faber said that there is "always some risk that the products produced with talc contain this dangerous carcinogen."

Good Housekeeping: So, About the FDA Finding Asbestos in Claire's Makeup: Here's What the Government Is Doing About It

The use of the clay mineral talc is specifically in question, since it's mined from underground deposits that may also contain asbestos, a classified carcinogen. The Environmental Working Group (EWG) says that about one in 12 of the beauty products it's tested contains talc. Reprinted by Yahoo! News.

Vox: Could baby powder soon come with a warning label?

Three people spoke to the subcommittee: Dr. Anne McTiernan, an internal medicine physician and epidemiologist at the Fred Hutchinson Cancer Research Center who has also served as an expert witness in some of the talc cases against Johnson & Johnson; Scott Faber, the vice president of government affairs for the Environmental Working Group (EWG), which has been heavily influential in promoting scrutiny of cosmetics ingredients and urging greater regulation; and Marvin Salter, whose mother, Jacqueline Fox, won a $72 million jury verdict from J&J, only after dying from ovarian cancer. Lawmakers present from both parties seemed to be concerned by their powerful testimonies.

The Environmental Working Group’s Scott Faber testified that the FDA has regulated only nine ingredients for safety reasons, while dozens of countries have already taken steps to ban or restrict more than 1,400 chemicals or contaminants in personal care products. "Cosmetics and other personal care products have fallen into a regulatory black hole," he said.

he hearing included statements from the Environmental Working Group, speaking about issues regarding the federal regulation of cosmetic products, and Johnson & Johnson, reporting on the safety of their products. Watch the opening statement below.

Legal News Line: Johnson & Johnson, not asked to testify on talc, alleges Congressional hearing was biased against it

Scott Faber, vice president of government affairs for the Environmental Working Group, an activist organization, told the committee that "chemicals and contaminants linked to cancer can be found in food, water and many other everyday products."

In testimony before Congress today, Scott Faber of the Environmental Working Group said the FDA needs to do more about asbestos in personal care products.

In testimony earlier than Congress as we speak, Scott Faber of the Environmental Working Group stated the FDA must do extra about asbestos in private care merchandise.

In testimony before Congress today, Scott Faber of the Environmental Working Groupsaid the FDA needs to do more about asbestos in personal care products.

This is a profound realization when considering that the average woman uses 12 products every day, averaging 168 total ingredients, according to a survey by the Environmental Working Group. Anyone who has ever tried and failed to decipher a dense ingredient list on the back of a bottle tends to assume that, if it is meant to be put on your face, the product is likely safe. Unfortunately, that assumption overlooks the worrying lack of ingredient testing before products are introduced to the market. Reprinted by Vogue U.K.

David Andrews, a scientist with the Environmental Working Group, says he finds the proposed standard “egregious.” “The cleanup standard for groundwater or ambient water, contaminated sites really, should be no weaker than a drinking water set, and no weaker than the EPA lifetime health advisory,” Andrews said.

Splinter: The Pentagon Doesn't Want to Pay to Clean Up Toxic Chemicals Released on Military Bases

The Environmental Working Group has found contamination by PFAS at 106 military sites.

The Hill: The 100 percent renewables moonshot: We're closer than you think

Want to care for the environment while you clean? Check out these eco-friendly cleaning supplies recommended by a top green cleaning coach. Note: Most of these products have been graded A or B by Environmental Working Group, a nonprofit, nonpartisan organization dedicated to protecting human health and the environment.

Then, we hunted for goods that not only checked off every box but also met our requirements for value and quality. We also considered third-party ratings, such as the product-safety grades from the Environmental Working Group. Here, our top healthy home product picks for every room in your house.

Glamour: Clean Beauty: Everything You Need To Know

The Environmental Working Group in the US reported that women are now exposed to a daily average of 126 chemicals from cosmetics, food, cleaning supplies and pollution.

Meanwhile, according to the Environmental Working Group (EWG), more than 8 million acres of grassland and wetlands have been converted to corn from 2008 to 2011, which released at least 80 million tons of carbon a year.

Bangor Daily News: How to choose the right fruit tree for your yard

The Environmental Working Group’s “Dirty Dozen” list of the produce with the most pesticides includes nectarines, apples, peaches, cherries and pears among its ranks.

However, you should ensure that they’re organic because they may contain toxic pesticides. Strawberries are on top of the “Dirty Dozen” list of the Environmental Working Group (EWG) 2018 Shopper’s Guide to Pesticides in Produce, as most strawberries commercially sold today are grown in fields sprayed with “jaw-dropping volumes of poisonous gases” to sterilize them and eliminate pests, weeds and other organisms in the soil.

Every year, the Environmental Working Group produces the Dirty Dozen – a list that cites all the fruits and vegetable with the highest levels of pesticide residue.

According to the Environmental Working Group, a nonprofit, nonpartisan environmental watchdog organization in Washington, D.C., the dangers of PFAS have been long known. Reprinted by Adirondack Daily Enterprise and The Post-Star (Glen Falls, NY).

National environmental groups tracking TCE say they aren’t aware of any state that has banned it, although some states ban its use for vapor degreasing, according to Tasha Stoiber, a senior scientist at the Environmental Working Group. But they applaud efforts to restrict it.