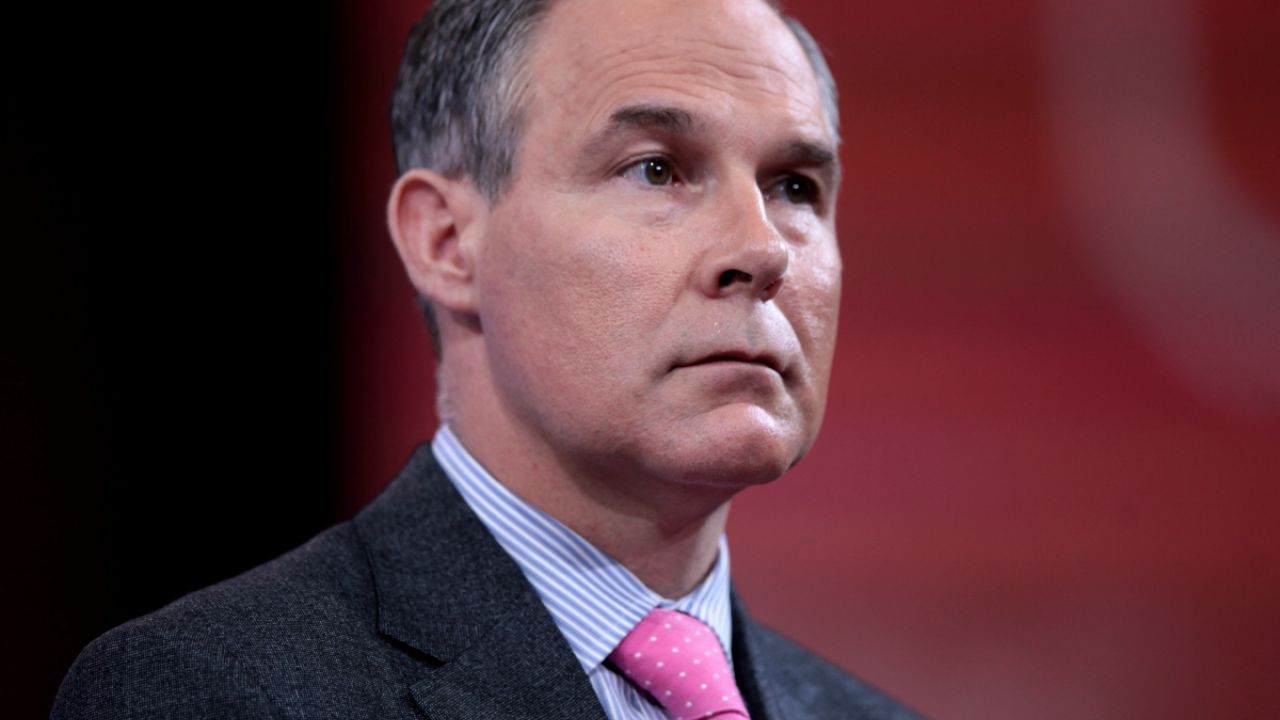 Scott Pruitt, President-elect Donald Trump's pick to head the Environmental Protection Agency, claims that as Oklahoma attorney general he achieved a “historic agreement” to clean up chicken manure pollution from factory farms in the scenic Illinois River. But in fact, the deal gave poultry polluters another three years to meet the clean water standards they had failed to meet for a decade.

In Pruitt's prepared testimony for his confirmation hearing before the Senate Environment and Public Works Committee today, he claims:

When I was sworn in as Oklahoma Attorney General I was immediately confronted with an important water quality issue on the scenic Illinois River. High phosphorous levels were causing a range of environmental problems, and Oklahoma—the downstream state—had been in a long-running dispute with Arkansas over how to control those levels. It’s well understood that interstate water issues are among the most challenging in environmental law and policy. However, I worked together with my Democratic counterpart in Arkansas to reach an historic agreement to clean up that river.

The record shows this statement is false on many levels.

An earlier agreement between Arkansas and Oklahoma, struck in 2003, gave polluters in Arkansas 10 years to reduce pollution that was triggering algae blooms in the Illinois River. It required upgrades to wastewater treatment plants and mandatory plans to limit how much chicken manure could be applied as fertilizer in the river basin.

That earlier agreement was indeed a historic achievement. But when Pruitt took office in 2011, there was no longer a “long-running dispute” over Illinois River pollution that needed to be resolved. In fact, between 2000 and 2010, levels of phosphorous, the pollutant that triggered the algae blooms, had fallen by more than 70 percent.

But phosphorous levels had not fallen far enough to meet the standards set by Oklahoma and approved by the EPA in 2003. Instead of fighting to enforce his state’s own water quality standards for phosphorus, he stalled. Pruitt’s 2013 amendment to the earlier agreement gave poultry polluters three more years to meet the goals established in 2003, plus an opening to weaken the standard by commissioning further study of the problem.

Pruitt’s 2013 amendment also suspended state enforcement efforts by Oklahoma, including litigation by Pruitt’s office. As EWG reported this week, Pruitt declined to pursue a 2005 lawsuit against poultry polluters who had contributed more than $40,000 to his 2010 campaign. Once elected, Pruitt disbanded the attorney general’s environmental protection unit and cut the budget for “environmental law” to zero.

Pruitt’s delay tactics likely postponed action by the EPA’s regional office, which has been developing a limit for phosphorous pollution in the Illinois River. If Pruitt is confirmed as EPA administrator, he will decide whether to move forward with setting the limit, known as a Total Maximum Daily Load. But, while attorney general, he helped fight a landmark cleanup proposal for the Chesapeake Bay, saying the EPA lacked the authority to help Maryland, Virginia and Pennsylvania create such a plan.

The truth is, Pruitt’s so-called “historic agreement” was a bad deal for Oklahoma – and for the Illinois River.

In response to questioning today, Pruitt continued to hold up the 2013 agreement as an environmental accomplishment and continued to make false claims about the case.

He said the 2003 agreement expired during his term. Not so. The 2003 agreement never expired; it merely required Oklahoma to revisit its phosphorus limit of 0.37 parts per million, or ppm, by 2012. Oklahoma did that and confirmed that .037 ppm was the right standard. But instead of vigorously enforcing that science-based standard, Pruitt bought the polluters more time by commissioning yet another study.

“Many in government at the time said that we should wait on the EPA to come in and address the issue,” Pruitt said. But the EPA already had addressed the issue. The EPA had affirmed the phosphorous standard and the agreement in 2003, creating an enforceable federal water quality standard. In fact, EPA efforts to set additional phosphorus limits in the Illinois River may have actually been stalled by Pruitt’s 2013 agreement. In fact, several poultry producers, including Tyson Foods, wrote to the EPA after the 2013 agreement, asking it to stall an action on phosphorus levels.

“We were able to negotiate an agreement that had phosphorus levels set at .037, scientifically driven and enforced on both sides of the border for the first time in history,” Pruitt said. He’s wrong on both counts. The limit was not set for the “first time in history” by Pruitt. It was set more than 15 years earlier in Oklahoma and had been reaffirmed less than a year before he signed his agreement.

Pruitt is also wrong to say the standard was “enforced on both sides of the border” for the first time because of his agreement. The 2003 agreement included requirements that discharge limits on upstream polluters be stringent enough to “meet applicable water standards,” including Oklahoma’s standard, as of 2012. Once again, instead of enforcing those requirements, Pruitt stalled by negotiating the new agreement.