The End of Environmental Law as We Know It 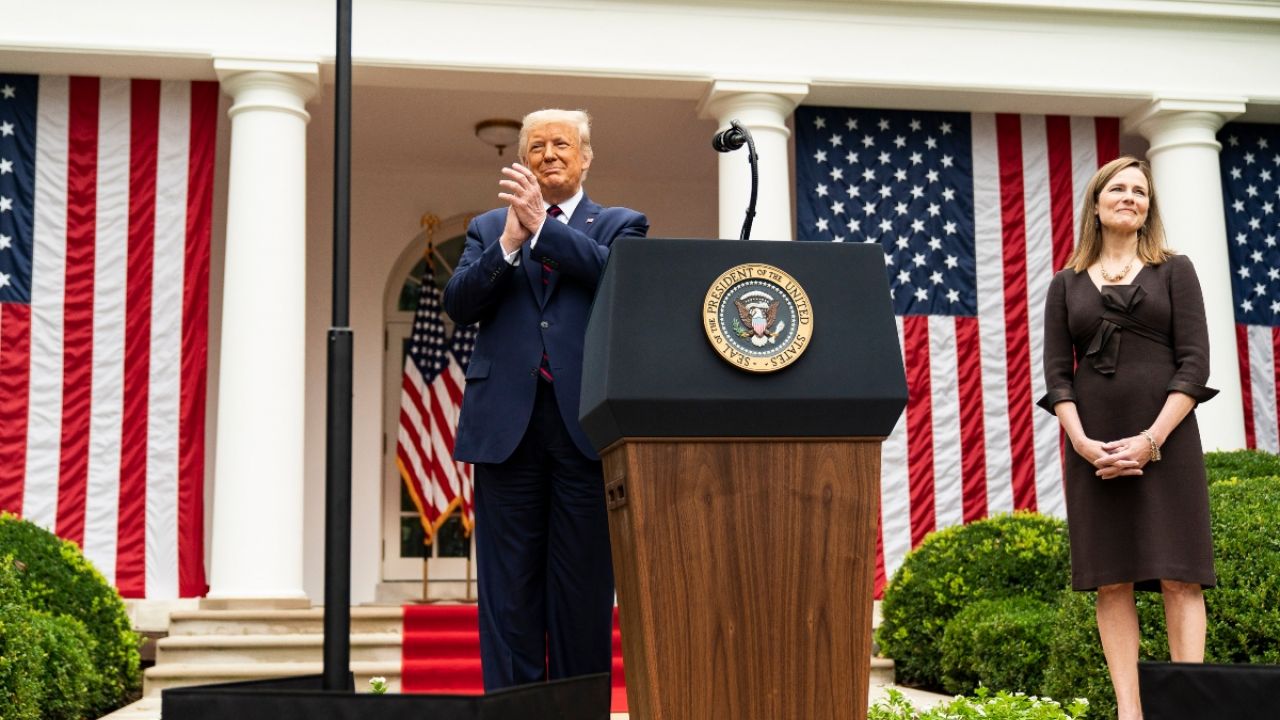 The Senate will almost certainly vote next week to confirm Judge Amy Coney Barrett to the Supreme Court. Because of the way she sees the role of government, her confirmation could mark the end of modern environmental law as we know it.

Several justices already on the Supreme Court have shown they are eager to constrict the power of the Environmental Protection Agency and other regulatory agencies. Confirming Coney Barrett will solidify the anti-regulatory stance of the court, making it much more likely to vote to uphold the Trump administration’s environmental rollbacks, weaken existing environmental protections and strike down future public health regulations.

1. Reviving the nondelegation doctrine to wipe out environmental laws

Perhaps the most significant threat is the potential expansion of the “nondelegation” doctrine, which two University of Michigan law professors call “one of the most dangerous ideas in American law.” This is the theory that the Constitution forbids Congress from delegating important policy decisions to any other person or institution – including agencies like the EPA or the Food and Drug Administration.

Aggressive application of this doctrine would fundamentally change how most law-making happens. The Clean Air Act, Clean Water Act and other laws grant the EPA general authority and allow agency experts to determine how to regulate individual pollutants. Reversing this longstanding practice would shift that responsibility back to Congress, which lacks the necessary expertise.

Neither the Constitution nor texts of original constitutional debates describe any principle of nondelegation. The Supreme Court has not used the nondelegation doctrine to overturn a law since 1935. But there is a real threat that an anti-regulation majority could invoke the doctrine to handicap agencies like the EPA.

An expanded nondelegation doctrine would be a disaster for environmental law. Whole portions of environmental laws could be invalidated if the court were to determine that Congress gave EPA too much power.

Nondelegation could overturn agency actions implementing the Toxic Substances Control Act, or TSCA, which Congress overhauled in 2016. For example, the EPA will soon propose its first restrictions on 10 chemicals under the new law. The law also gave the EPA expanded authority to require industry to conduct more health and safety studies on chemicals.

Chevron v. Natural Resources Defense Council is a 1984 Supreme Court decision involving a challenge to the EPA’s definition of “sources” of air pollutants. Chevron established the bedrock principle that courts will defer to agency interpretation of the law when statutory language is ambiguous. Agencies like the EPA and the FDA are given deference because they employ career subject matter experts. EPA rules, like limits on mercury emissions from coal-fired power plants, are released only after years of study by teams of expert scientists and lawyers.

Chevron deference has long been a target of the anti-regulatory legal movement. House Republicans in 2016 and 2017 twice passed legislation to limit agency deference, but those bills were never taken up by the Senate. And several sitting justices have shown eagerness to scale back deference.

When Gorsuch was on the 10th Circuit Court of Appeals, he argued in a concurring opinion that Chevron should be reconsidered, saying, “The time has come to face the behemoth.” Roberts joined Alito in a dissent in the 2013 case City of Arlington, Tex. v. FCC, arguing for limits on Chevron, stating, “A court should not defer to an agency until the court decides, on its own, that the agency is entitled to deference.”

Absent new authority from Congress, the EPA will have to rely on its existing authorities under the Clean Air Act and Clean Water Act to curb air and water pollution and mitigate climate change. A deregulatory-focused court would threaten the EPA’s ability to use those authorities to protect public health and the environment. The EPA will also soon determine whether to ban uses of chemicals like asbestos, TCE and formaldehyde under the updated TSCA. EPA has also begun the long process of initiating regulations on PFAS in drinking water. Limiting deference could undermine agency decisions on how to protect consumers from those chemicals.

A shift to the right at the Supreme Court imperils well-established environmental law precedents. The principle of stare decisis establishes that lower courts must follow higher court decisions and that the Supreme Court is generally bound by its earlier decisions. Stare decisis is a defining feature of America’s common law legal system. Overturning precedent is usually rare and not a decision that judges take lightly.

Nonetheless, Coney Barrett has taken the radical position that she would support overturning precedents if she believed those cases were wrongly decided. In 2013, she wrote in a law review article: “I tend to agree with those who say that a justice’s duty is to the Constitution and that it is thus more legitimate for her to enforce her best understanding of the Constitution rather than a precedent she thinks clearly in conflict with it.” The result, according to one legal scholar, would be “chaos and instability in constitutional law.”

Much attention has been paid to how this would affect reproductive rights under Roe v. Wade, but Coney Barrett’s judicial philosophy also endangers important environmental precedents.

For example, Massachusetts v. EPA established that the EPA must regulate greenhouse gases under the Clean Air Act. A strongly worded dissent in Massachusetts v. EPA was penned by the late Justice Antonin Scalia, and Coney Barrett is likely to agree. Coney Barrett clerked for Scalia, shares his judicial philosophy and has said that he has had an “incalculable influence” on her.

Another important environmental precedent at risk is Friends of the Earth v. Laidlaw Environmental Services, a landmark opinion by the late Justice Ruth Bader Ginsburg that greatly expanded access to courts by environmental groups.

4. Limiting access to courts through a narrow application of “standing”

A Supreme Court reversal of the Laidlaw case would make it much harder for environmental groups to have their day in court. Even if the Supreme Court did not overturn Laidlaw, Coney Barrett would likely support new limits on access to courts, based on her opinions in the 7th Circuit.

In order to sue the government, a group or individual must first establish “standing,” which means that someone cannot sue the government simply because they do not like a new law or regulation, but instead they must be directly harmed.

The Laidlaw opinion established that plaintiffs, including environmental groups, do not have to show actual harm to have standing, but that a reasonable fear of harm is sufficient. Scalia dissented, arguing that plaintiffs need to specify harms. Scalia’s proposed approach would make it harder for community and environmental groups to access courts, because specific harms from pollution like cancer can take years to manifest.

Laidlaw was a groundbreaking case, because it made courts more accessible to groups that care about public health and the environment. But as a 7th Circuit judge, Coney Barrett has already shown support for more limited access to courts. In Protect Our Parks, Inc. v. Chicago Park District, she found that a park preservation group did not have standing to sue to block a construction project in Chicago’s Jackson Park.

Access to courts is an important part of holding government accountable. For example, this week the community group Alaska Community Action on Toxics sued the EPA for underestimating risks from three flame retardants. Several environmental groups have also sued the EPA over its lax and secretive approach to new chemicals regulation under the Toxic Substances Control Act. Other groups have sued over an EPA rule failing to protect workers from a deadly paint-stripping chemical. Limiting standing would make it easier to dismiss these kinds of cases on procedural grounds without even addressing the substance of the legal challenges.

The Supreme Court has long recognized constitutional limits on state laws if they interfere with interstate commerce. For example, states cannot have different requirements for mudguards on trucks and trailers or refuse garbage from cities in neighboring states, if those requirements would be overly burdensome to commerce. An anti-regulatory Supreme Court could also use this doctrine, known as the “dormant commerce clause,” to invalidate state environmental laws and regulations.

As the Trump administration has worked to aggressively roll back regulations over the past four years, states have been leading the way on climate change and chemical regulations.

They have been particularly important in the fight against PFAS chemicals, which remain largely unregulated by the federal government. For example, the EPA has not yet regulated PFAS in drinking water, but five states have set their own drinking water standards. Several states have also banned PFAS in firefighting foam and food packaging. States also play an important role in limiting discharges from individual facilities through permitting requirements.

The Supreme Court may decide an energy case based on the dormant commerce clause this term.

The court is currently deciding whether to take up a case challenging Washington state’s denial of a Clean Water Act permit for a coal export facility. Two states, Wyoming and Montana, have asked the Supreme Court to review Washington’s decision, arguing that it denies their coal producers access to Asian markets and burdens interstate commerce.

Justices Thomas and Scalia previously used the dormant commerce clause to reject state laws regulating the environment. The anti-regulatory leanings of the court’s current conservative justices suggest that they might also be willing to invoke the dormant commerce clause to limit state actions. A ruling against Washington state could have a chilling effect on state environmental permitting and make other state actions more vulnerable to legal challenges.

Justice Kavanaugh, the last justice appointed by the Trump administration, has a long judicial record of supporting polluters and limiting environmental protections. Confirming Coney Barrett will shift the court even further to the right and create a larger margin of support for anti-regulatory, anti-environment decisions. That shift has the potential to seriously handicap the ability of the EPA and the states to protect our air and water for a generation.