Virgin Prairie Goes Under the Plow Last month, the National Wildlife Federation reported that more than 398,000 acres – 620 square miles – of grasslands, forests and other land were plowed, cleared or otherwise converted to grow crops over a 12-month period from 2011 to 2012.

During the same period barely a third as much – 146,108 acres in all – was taken out of cultivation and switched back to non-cropland.

Worse yet, USDA’s Farm Service Agency (FSA) reported, the land converted to grow crops was pristine ground – including native grassland and prairies – that had never previously been plowed up. Moreover, the startling pace of conversion reported by the agency relies on data voluntarily submitted by landowners and may well underestimate how much native habitat is actually being lost.

The FSA report revealed that almost half (48.5 percent) of the 620 square miles that went under the plow was located in just seven states – Nebraska, South Dakota, Texas, Florida, Iowa, Kansas and California – which each lost more than 15,000 acres of virgin habitat in just one year. Those same states accounted for just 18 percent of the total acreage converted to non-cropland.

These findings confirm numerous earlier reports documenting the massive expansion of cropland that has been taking place throughout the western corn belt and the country as a whole. In its recent Going-Going-Gone! report, Environmental Working Group found that 7.2 million acres of highly erodible land, wetlands and wetland buffers were placed in cultivation between 2008 and 2012. And EWG’s researchers found a striking overlap between counties that were hotspots for habitat loss and those that had had large crop insurance payouts.

To protect America’s few remaining unspoiled landscapes from the plow, the Congressional conference committee trying to come up with a new farm bill must make sure that the over-subsidized federal crop insurance program doesn’t make it too easy for landowners to convert fragile areas. The lawmakers must include provisions that restrict premium subsidies for landowners who convert native habitat and require those who accept subsidies to take basic steps to protect fragile land and wetlands. Taxpayers already pick up nearly two-thirds of crop insurance premiums, and the both the House and Senate versions of the farm bill would ask taxpayers to cough up even more.

The Senate bill includes these critical provisions, but the House’s version does not. Senate conferees must stand firm and make sure that these common sense provisions are in the final bill.

This map shows where USDA’s Farm Service Agency reported loss of native habitat. Zoom in and click on a desired county to see how many acres of virgin land were converted to growing crops in just a single year. 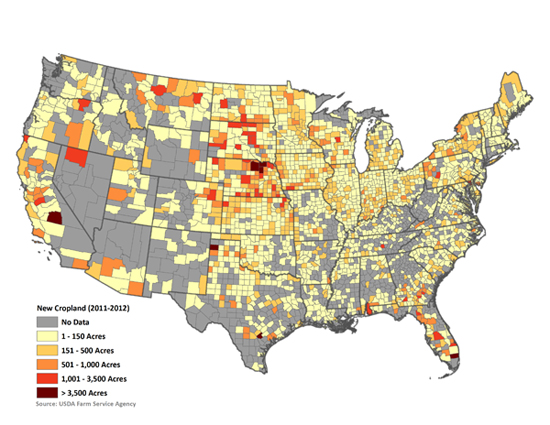