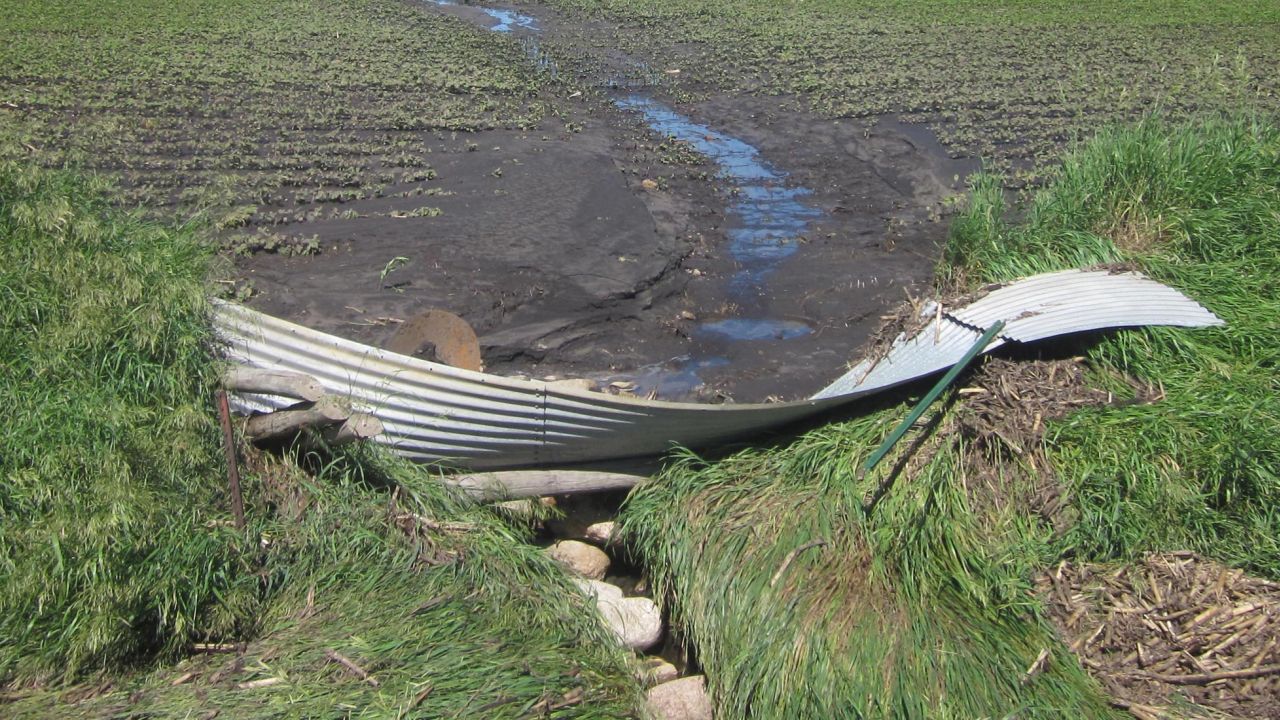 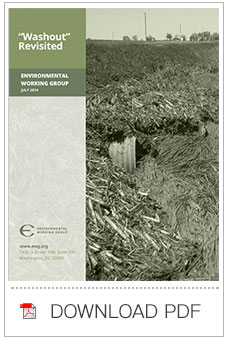 In 2013, an Environmental Working Group report titled “WASHOUT” documented that soil erosion across Iowa farm land during that spring’s heavy rains had been far worse than previous estimates – in some cases carrying away a devastating 40 tons of soil in a single week from fragile and poorly protected fields. In many places, runoff carved “ephemeral gullies” as a result of growers’ inadequate conservation measures.

This spring, after a late-May thunderstorm, EWG revisited 18 of the crop fields it had first surveyed in 2013, and the news was better. In contrast to last year’s watery onslaught, many of the 18 fields were not hit as hard this time, but in too many locations growers are still not implementing conservation measures that would reduce erosion in the next heavy downpour.

The fact is, the climate is changing. Intense rainstorms are occurring more frequently (see chart), and as a result of inadequate conservation efforts, much of Iowa’s precious soil is washing away, costing Iowa farmers billions in yield and polluting waterways with fertilizers, chemicals and sediment.

Sign up to stay in touch with EWG Midwest:

Interactive map showing the revisit of conservation survey points from 2013. Click the dots on the map to see photo comparisons of each site.
Photo Gallery

According to the Iowa Department of Natural Resources, June 2014 was the state’s fourth wettest month in 141 years of record keeping. (see graphic on left)

EWG’s analysts returned this spring to tracts of highly erodible land they had surveyed last year to determine whether any new conservation practices such as grassed waterways and buffer strips had been implemented since last year’s downpours.

Overall erosion did not appear to be as severe as in 2013 because central Iowa dodged the worst storms that hit the state this spring. On five of the 18 fields, growers had taken new steps to prevent formation of ephemeral gullies and lessen soil loss — an encouraging development. On four of the five fields, new conservation measures had been implemented, and on one field a failed conservation feature had been repaired. On another five tracts, functioning soil-conserving practices that were in place in 2013 were being adequately maintained a year later.

Click on the interactive map on left to see before and after photo comparisons of each site.

Estimates Understate the Severity of Erosion and Runoff

In terms of average soil erosion, central Iowa got off relatively easily this year compared to the five days of storms in late May 2013 (May 25-29) that were the focus of EWG’s 2013 “Washout” report.

Data compiled by Iowa State University’s Iowa Daily Erosion Project (IDEP) shows that this year, fields in southwest and northeast Iowa took the brunt of strong storms in April, May and June. Over the six months from January 1 to June 30, the worst erosion took place in Pottawattamie, Adair, Clayton and Cass Counties, which accounted for 29 percent (4.3 million tons) of all soil loss from Iowa cropland.

Soil erosion and polluted runoff are actually worse – likely far worse – than the Iowa State estimates, because it cannot currently account for the erosion and runoff caused by ephemeral gullies. These gullies – called ephemeral because farmers refill them temporarily with tilled soil each year – appear quickly when runoff water flows through the lowest parts of a field and cuts a channel through unprotected soil.

A gully formed again this year where a grassed waterway was still broken.

Grassed waterway kept a gully from forming again this year but needs repair.

A gully formed again in the same place as last year.

A gully cut through a field again in the same place as last year.

A still-unprotected waterway and gully formed this year.

A gully started to form again this year, but luckily it didn't rain as hard as last year.

Still no grassed waterway is still missing, but luckily it didn't rain as hard as last year.

Gully forming again at the end of the unprotected waterway, but luckily it didn't rain as hard as last year.

A gully started to form again this year, but luckily it didn't rain as hard as last year.

A grassed waterway protected this field again this year.

Crop residue and soil washed off this field and filled up the roadside ditch.

This roadside ditch was completely filled with soil and crop residue running off adjacent field.

A gully formed on both side of a neglected grassed waterway, inundating this ditch with soil and residue.

A large grass waterway coupled with a control structure slowed running water flowing off this field.

In this new grassed waterway, the grass was not mature enough to slow runoff and some erosion occurred.

A gully formed and had enough force to bend the metal sheet used to slow down water.

A meandering gully drains into an already filled drainage ditch.

A large gully the size of a small river formed and holds standing water atop an emerging corn field.

A gully drains water, soil and nutrients off an emerging soybean field.

A Step in the Right Direction, But Still Miles to Go

How much difference did a year make? In the areas that EWG researchers revisited this year, we found that some farmers had taken the necessary steps to protect soil and water by installing or repairing grass waterways or applying cover crops. But in other places essential conservation practices were still missing on highly erodible land, allowing soil and farm chemicals to flow into ditches, streams and, in some cases, into underground drainage systems.

Central Iowa dodged an erosion bullet, but southwest and northeast areas were not as lucky. Across the state, erosion rates are still intolerable and will continue to be if Iowans don’t act now.

When the rains come next year, will Iowa be prepared? 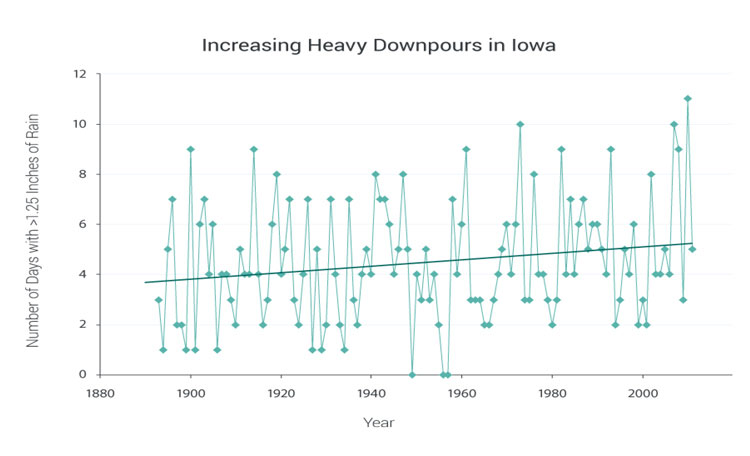 Click the dots on the map below to see photo comparisons of each site. (Some dots overlap; zoom in to see all or click here to see the map in full screen.) 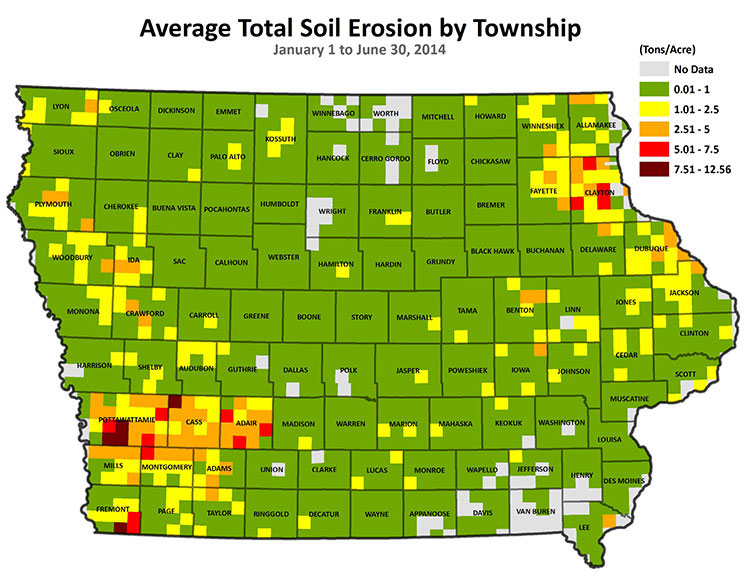