Taxpayers, Crop Insurance, and the Drought of 2012  |  Press Release 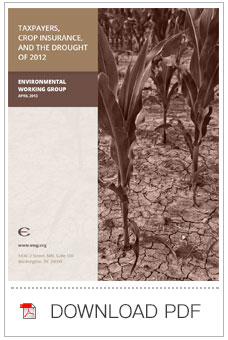 First, the 2012 drought drastically cut crop yields across several states – just the kind of event that many economists agree justifies a role for taxpayers in providing farmers with a safety net. Second, Congress is about to take up the farm bill again under serious pressure to cut spending. The taxpayer cost of crop insurance has grown steadily since 2000 and now is the most expensive government program supporting farm income. EWG thought the 2012 drought would be the perfect case to test whether it’s possible to save federal tax dollars while still providing an effective safety net for farmers facing potentially crippling losses.

Dr. Babcock’s conclusions should be a wake-up call for taxpayers and the senators and representatives in Congress charged with creating a more fiscally responsible safety net. His key findings:

This latest report from Bruce Babcock adds to the growing evidence that common sense reforms to crop insurance would save billions of dollars while still providing a solid safety net, cutting the deficit and investing in programs that improve human health and the environment. So far, however, the subsidy lobby has managed to push Congress in the opposite direction. If either the failed Senate or House Agriculture Committee farm bill proposals from last year were to become law, taxpayers would be asked to pay even more for crop insurance while funding for conservation and nutrition programs went under the budget knife.

Congress should and could do far better as it takes up the farm bill again this year.