Nitrate in U.S. Tap Water May Cause More Than 12,500 Cancers a Year 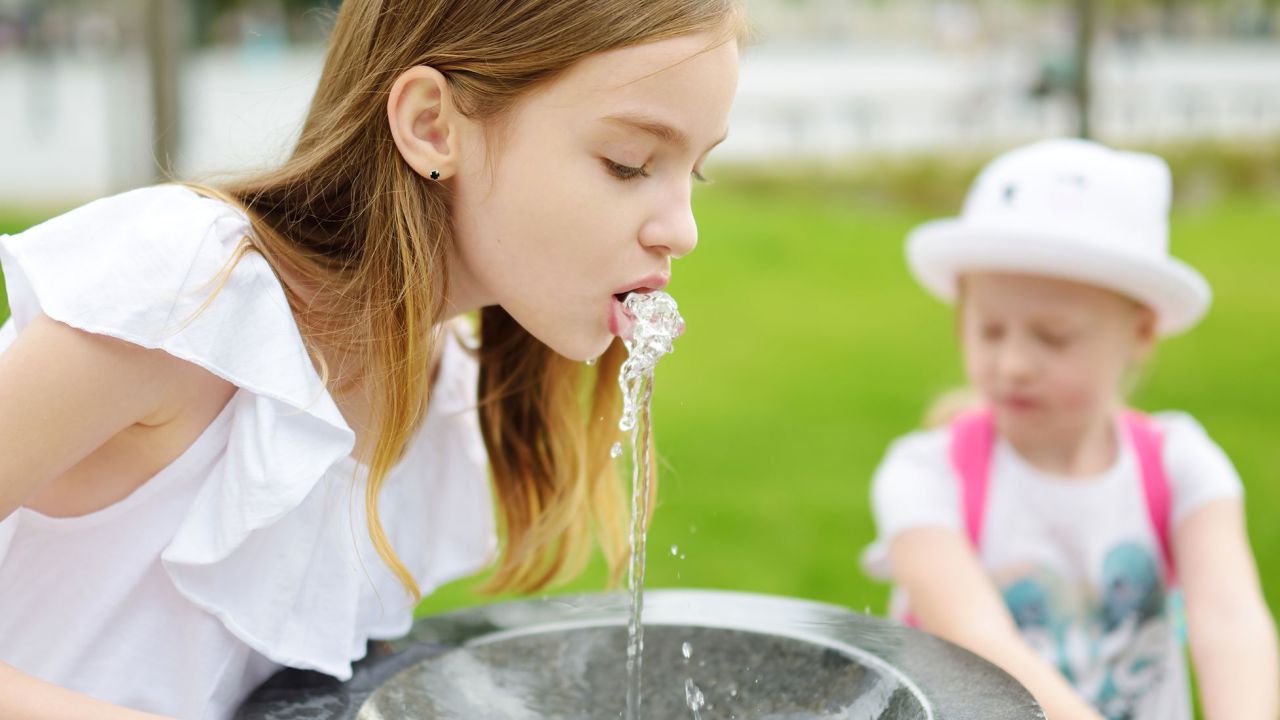 Nitrate pollution of U.S. drinking water may be responsible for up to 12,594 cases of cancer a year, at a cost of up to $1.5 billion for health care, according to a new peer-reviewed study by the Environmental Working Group.

For the first-of-its-kind study, published today in Environmental Research, EWG scientists estimated the number of cancers in each state that could be caused by nitrate contamination of public water systems. The state estimates, expressed as a range of cancer cases per 100,000 people, are shown on the interactive map below. 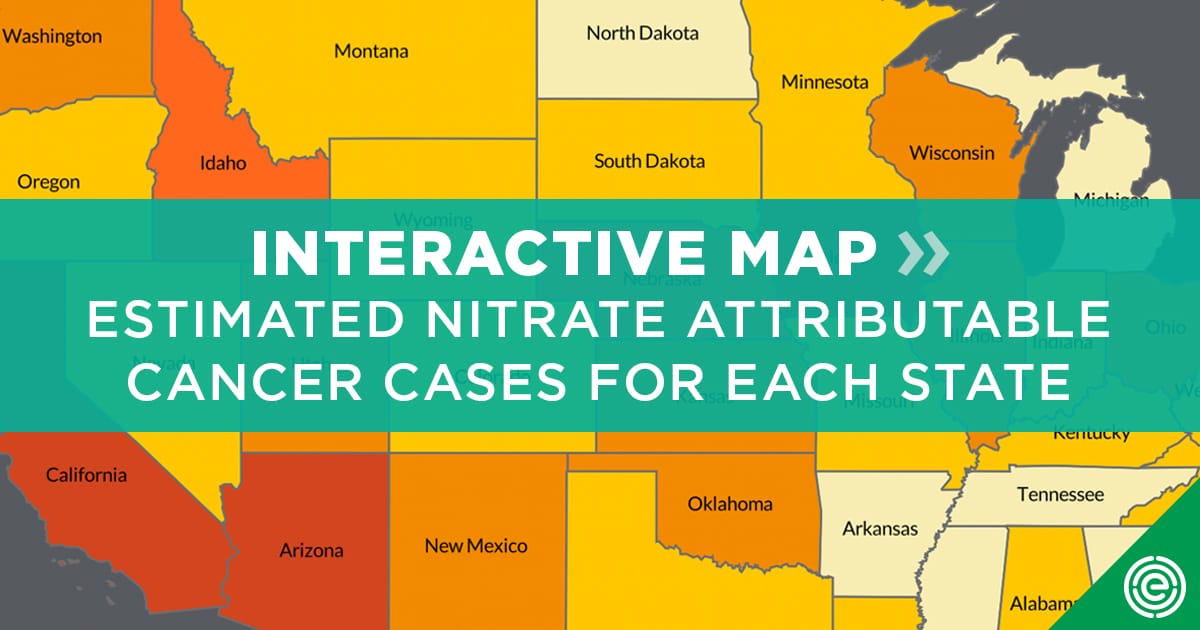 Four states – Delaware, Arizona, California and Iowa – had population-weighted[1] average levels of nitrate contamination that, at the high end of EWG’s estimates, could cause more than 10 cases of cancer per 100,000 people a year. Pennsylvania, Maryland, Nebraska, New Jersey and Idaho had average contamination levels that could annually cause more than five cases per 100,000. Contamination levels were those reported by public water systems to the federal Safe Drinking Water Information System from 2010 to 2017.

EWG scientists looked at exposure scenarios in seven U.S. and international epidemiological studies showing increased risk of five types of cancer associated with different levels of nitrate in drinking water. The studies showed increased risk of some cancers at contamination levels more than 10 times lower than the Environmental Protection Agency’s legal limit for nitrate in drinking water. EWG’s analysis found that colorectal cancer made up four-fifths of the cases attributable to nitrate exposure, with smaller shares from ovarian, thyroid, kidney and bladder cancers. Nitrate is a chemical in commercial fertilizers and manure that can run off of farm fields into sources of drinking water. Nitrate, primarily from agricultural runoff, contaminates the public water supplies of thousands of communities nationwide, with the problem most severe in farm country.

The Environmental Protection Agency’s legal limit for nitrate in drinking water is 10 parts per million, or ppm.[2] It was set in 1962 to protect against so-called blue baby syndrome, a potentially fatal condition that starves infants of oxygen if they ingest too much nitrate.

The average levels of nitrate in all states – even those in the EWG study’s top tier of risk – and the vast majority of individual public water systems comply with the federal nitrate standard. But the best current science shows it is far too high to protect against cancer and some adverse pregnancy outcomes.

Colorectal cancer is the third most common cancer for men and women in the U.S., with 145,600 cases estimated for 2019. Known risk factors include obesity, smoking, physical inactivity, and eating red and processed meat, but nitrate in drinking water may also be a factor.

In 2018, a nationwide study in Denmark found a significant increase in colorectal cancer risk at nitrate levels above 0.9 ppm. And in 2016, a study conducted in Spain and Italy found an increase in colorectal cancer risk at approximately 1.7 ppm of nitrate. A long-running epidemiological research program based in Iowa has reported an association of nitrate in drinking water and increased risk of colorectal, ovarian, thyroid, and bladder cancers.

Some other studies do not show a link between nitrate and colorectal cancer. But EWG scientists conducted a meta-analysis, combining evidence from eight previously published studies, and found a statistically significant association between nitrate and colorectal cancer. Based on the meta-analysis, EWG estimates that the nitrate level that would cause no colorectal or other cancers would be 0.14 ppm – 70 times lower than the EPA’s current legal limit.

In light of studies showing the inadequacy of the federal legal limit, in 2017 the EPA’s Integrated Risk Information System program, or IRIS, began a review of health effects from nitrate in drinking water. But in April, IRIS announced that the review has been suspended as it was not considered a priority for 2019.

But cancer is not the only health risk from nitrate in drinking water. It has also been associated with low birth weight, premature birth and neural tube defects.

EWG calculated that current nitrate contamination of U.S. drinking water may be responsible each year for 2,939 babies born at very low weight and 1,725 babies born very preterm.[3] Nitrate may be responsible for 41 annual cases of neural tube defects. A nitrate level of 0.14 ppm would also protect against these outcomes.

Nitrate contamination of drinking water sources and tap water is particularly severe in agricultural regions such as the Midwestern corn and soy belt and California’s Central Valley. A 2017 EWG report found that three-fourths of communities whose drinking water nitrate levels are at or above the legal limit are found in just five states – Arizona, California, Kansas, Oklahoma and Texas. The 43 million Americans who get drinking water from their own wells may be at even greater risk from nitrate contamination.

EWG’s new study estimated that cancers attributable to nitrate contamination of drinking water may carry a cost of up to $1.5 billion a year for medical treatment. If you add the impact of lost productivity from people made sick, the total annual cost could be up to $8 billion.

Last year, EWG found that more than 1,100 public water systems with elevated nitrate levels have no treatment facilities to remove or reduce contamination. If all of them installed treatment systems, depending on the technology chosen, the annual cost would be up to $765 million a year. And that estimate was for lowering nitrate levels to 5 ppm, half the legal limit. As EWG’s new study shows, drinking nitrate at that level may still pose health risks, and more costly removal to much lower levels may be advisable.

More than 9,000 utilities in the U.S. have average nitrate concentrations 10 times higher than EWG’s health standard for nitrate in drinking water.

What can people do?

Home treatment options are limited because ordinary carbon filters cannot reduce nitrate levels in water. Reverse osmosis can remove nitrate, but it is a significantly more expensive technology. So what can people do about nitrate contamination of their drinking water?

First, find out what levels of nitrate are in your water. For people served by public water systems, this information should be available in the system’s annual Consumer Confidence Report. People with private wells should have their water tested, especially if they live in agricultural areas, because nitrate levels can change over time. Private well testing is especially important for households with young children or those planning to have children.

It’s much cheaper to keep nitrate out of drinking water in the first place than to remove it. Federal and state farm policy must include aggressive, targeted and enforceable efforts to control agricultural runoff. The cost in health problems and water treatment is too high.

[1] Population weighting means that state averages of nitrate contamination took into account how many people are served by a public water system, so that high levels in a small system don’t count more than low levels in a large system. The result is an estimate of the nitrate exposure of a typical resident of the state.

[2] The U.S. standard, as well as the levels in the cancer studies analyzed by EWG, is in milligrams per liter (mg/L), which is equivalent to parts per million (ppm).

[3] Very low birth weight is considered below about 3 pounds, 5 ounces, and very preterm birth as born at 28 to 32 weeks.

Full methodology and sources are available in the EWG study published in the journal Environmental Research.

The estimated range of nitrate-attributable cancer cases was calculated using the following equation, based on a methodology published in 2010 by scientists from the Netherlands:

The national cancer incidence values were obtained from the Centers for Disease Control and Prevention. Baseline incidence was calculated using the following equation:

In this analysis, the relative cancer risk in the population that does not have nitrate in drinking water, defined as “unexposed population,” is equivalent to 1.