As the fight over GMO labeling heats up this year, spending trends on Washington’s K Street point sharply higher.

The food companies that spent the most last year for anti-GMO-labeling legislation and other issues were Coca-Cola, PepsiCo, Kellogg’s, Kraft Heinz Co., Land O’Lakes and General Mills. Disclosures filed by these companies reported $20.6 million in expenditures on K Street lobbying to fight GMO labeling and other legislative priorities.

Since 2013, the same six companies have spent a whopping $47.9 million to lobby against GMO labeling, among other issues. 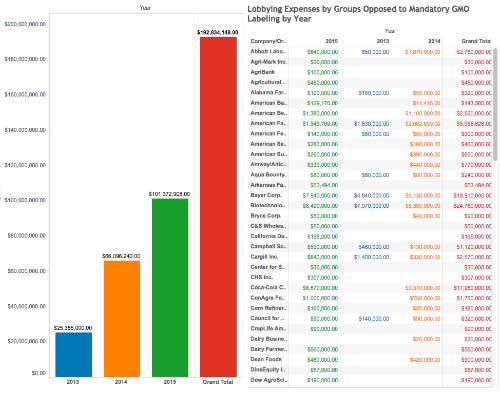 The Grocery Manufacturers Association, a trade group that represents food manufacturers, filed disclosures reporting $10.5 million in lobbying expenditures last year for the anti-labeling battle and other GMA legislative priorities. An EWG analysis of the group’s disclosure forms revealed that since January 2014 it had hired 34 lobbyists and spent $2.8 million on lobbying that went exclusively to advocate anti-GMO-labeling legislation. 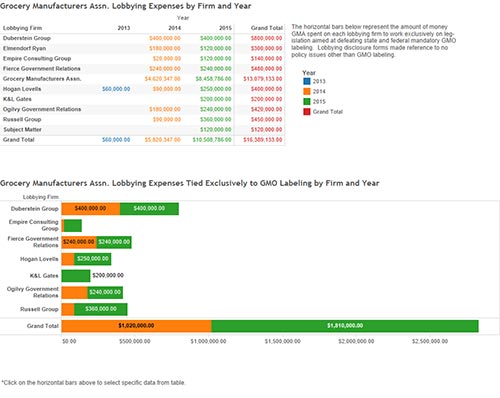 All told, since 2013, the food, farm and biotech industries have disclosed spending $192.8 million for lobbying to influence federal GMO labeling legislation and for other issues.

The amount food, farm and biotech corporations and trade groups spend on K Street lobbying has risen sharply. Last year’s total exceeded $100 million for the first time, a steep increase compared to $66 million spent in 2014 and $25.4 million in 2013.

EWG’s analysis is based on documents filed with the Clerk of the U.S. House of Representatives and the Secretary of the U.S. Senate. It counted filings that mentioned GMO labeling legislation among various policy issues and not those that made no reference to the topic.

Food, farm and biotech industries have lined up behind a bill introduced by Rep. Mike Pompeo, R-Kan..  Critics have dubbed it the Deny Americans the Right to Know – or DARK – Act. It passed the House of Representatives last July by a vote of 230 to 45.  Sen. Pat Roberts, R-Kan.,  introduced a companion measure in the Senate earlier last week.

Roberts’ version of the DARK Act would bar states from enacting laws to require GMO labeling and make it harder for companies like Campbell’s to make voluntary GMO disclosures. Pompeo’s version would also block state laws prohibiting “natural” on advertising and labels of GMO foods, and make it virtually impossible for the U.S. Food and Drug Administration to set up a mandatory national GMO labeling system.

Both bills claim that “voluntary” GMO labeling is the solution to consumer confusion sowed by decades of misleading food claims. But, Pompeo and Roberts’ logic is puzzling: food manufacturers can make “GMO-free” claims today if they so choose and have been able to do so since 2001.

In a related development, EWG calculates that food and biotech companies and trade associations have spent nearly $200 million to oppose state GMO labeling ballot initiatives. When combined with Washington lobbying expenditures that mention GMO labeling, the total amount spent by labeling opponents is close to $400 million. This estimate does not include lobbying expenditures in state legislatures. 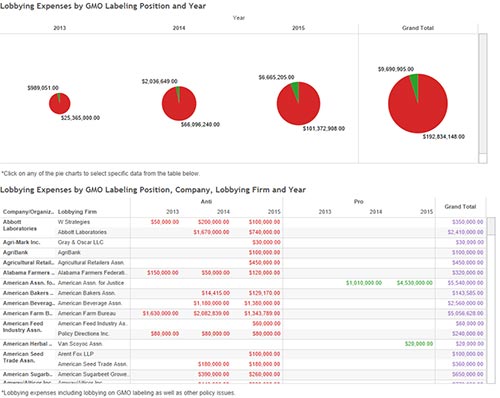 The practice is widely accepted internationally: Some 64 other nations have labeling laws.

Labeling foods that contain GMOs has not increased food prices in those nations that require such disclosures.  Studies show that a simple GMO disclosure on food labels will have no impact on food prices or food security.