MENU
Home > Research > Up to Half of Young Children Get Too Much Vitamin A, Zinc and Niacin
How Much is Too Much?

Excess Vitamins and Minerals in Food Can Harm Kids’ Health

How Much is Too Much? : Up to Half of Young Children Get Too Much Vitamin A, Zinc and Niacin 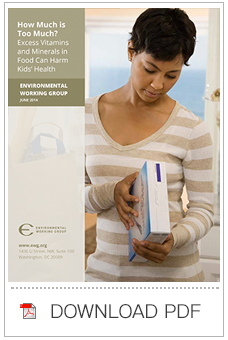 For vitamins and minerals, there are health risks to consuming too much as well as too little. Adequate amounts are essential to maintain health and prevent disease, and historically deficiencies of essential vitamins have caused diseases such as scurvy, pellagra and rickets. In developed countries, however, economic advances over the last century have significantly improved diets, resulting in a better dietary supply of many nutrients.
Paradoxically, however, widespread use of dietary supplements and extensive mandatory and voluntary fortification of foods with vitamins and minerals have created the opposite danger – excessive intake. It’s still important for everyone to get an adequate supply of micronutrients, but it is also vital to make sure people don’t get too much of certain vitamins and minerals, because overconsumption can also cause health problems (BfR 2005; BfR 2006; Dwyer 2014; IOM 2003).
Between 1997 and 2001, the Institute of Medicine calculated what it calls Tolerable Upper Intake Levels (UL) for various nutrients, which it defined as “the highest level of daily nutrient intake that is likely to pose no risk of adverse health effects to almost all individuals in the general population.” As intake increases above these upper levels, the risk of harmful effects increases (IOM 1998a). Tolerable Upper Intake Levels were calculated for specific age groups because both the daily needs and the tolerance of excess nutrients vary depending on body size and specific nutritional requirements (Verkaik-Kloosterman 2012; IOM 1998a). The European Union and the United Kingdom conducted their own assessments of the safe upper amount of vitamin and mineral intake and established upper limits or guidance levels that are similar overall to those of the Institute of Medicine (EFSA 2006; UK EVM 2003).
According to a recently published analysis of dietary intake data from the National Health and Nutrition Examination Survey 2003-2006, from food alone 8 percent of 2-to-8-year-old children consume too much niacin, 13 percent consume too much vitamin A and 45 percent consume too much zinc (Berner 2014). This analysis included both naturally occurring and fortified micronutrients in food. Potential over-exposures are much higher among the 42 percent of children in this age group whose parents give them dietary supplements (Bailey 2012a). These supplements vary greatly and can include multivitamins, multivitamins with minerals or individual vitamins and mineral preparations (Bailey 2013). Many supplements, such as gummy vitamins, have been developed to make them more palatable to children.
Taking into account both supplement users and non-users, EWG calculated that more than 10 million American children are getting too much vitamin A; more than 13 million get too much zinc; and nearly 5 million get too much niacin (Table 1).

Table 1: Many 2-to-8-year-old children are at risk of excessive nutrient intake

The data in Table 1 agree with the FDA’s analysis that 33 percent of 4-to-8-year-old children ingest zinc in excess of the IOM’s Tolerable Upper Intake Level and 26 percent are over-exposed to vitamin A (FDA 2014a). The FDA did not analyze niacin intake (FDA 2014a).
Routinely ingesting too much vitamin A over a long time — from foods such as liver, fortified foods or supplements ­— can lead to liver damage, skeletal abnormalities, peeling skin, brittle nails and hair loss. These effects can be short-term or long lasting. In older adults, high vitamin A intake has been linked to hip fractures. Taking too much vitamin A during pregnancy can result in developmental abnormalities in the fetus. High zinc intakes can impair copper absorption and negatively affect red and white blood cells and immune function. Niacin is less toxic than vitamin A and zinc, but excessive niacin intake can cause short-term symptoms such as rash, nausea and vomiting.

"Added nutrients are about marketing, not health."

In a 2005 report for the federal Women, Infants and Children (WIC) nutrition program, the Institute of Medicine warned that excessive exposure to dietary vitamin A and zinc posed a risk to formula-fed infants and 1-to-4-year-olds. In a more recent study, researchers at the Baylor College of Medicine, the NIH Office of Dietary Supplements and Nestlé Infant Nutrition reported that when all sources of nutrition were combined, 59 percent of 2-to-4-year-old children exceeded the Upper Intake Level for vitamin A and 72 percent exceeded the limit for zinc (Butte 2010).

What Major Studies Have Concluded

"Supplement use did increase the prevalence of intakes above the UL for iron, zinc, vitamin A and folic acid in all age groups and for vitamin C, copper, and selenium in those 2–8 y." (Bailey 2012a).

"High proportions of formula-fed WIC infants and WIC children ages 1 through 4 years had estimated usual intakes of zinc and preformed vitamin A that exceeded the UL" (Institute of Medicine 2005).

Overconsumption of these nutrients is less of a concern for older children because their greater body weight raises both their nutritional needs and tolerable upper intake levels. However, even 9-to-13-year-olds who take daily multivitamins and consume fortified foods may ingest too much zinc and vitamin A. About 32 percent of 9-to-13-year-olds that take supplements exceed the Institute of Medicine’s upper limit for zinc, and 21 percent exceed the limit for vitamin A (Bailey 2012a). Niacin intake from all sources exceeds the upper limit in 11 percent of 9-to13-year-old children (Berner 2014).
There are two major reasons for children’s excessive consumption of fortified nutrients in food: industry marketing and the FDA’s outdated system of nutrition labeling.
As EWG detailed in its May 2014 report, “Children’s Cereals: Sugar By the Pound,” research has shown that nutrition claims on packaging influences how consumers perceive the overall healthfulness of foods (Drewnowski 2010). One recent study of parents of school-age children found that half were more willing to buy cereals that carried a nutrition claim even though the products were of below average nutritional quality (Harris 2011a). The authors wrote that the nutrition- related claims “have the potential to mislead a significant portion of consumers” (Harris 2011a).
Other experts on food labeling have come to the same conclusion. Jennifer Pomeranz, a professor of law and public health at Temple University, wrote last year in the American Journal of Law and Medicine that, “Perhaps the most problematic result of these lax regulations is that products high in added sugar carry a wide variety of nutrient content claims, which misleadingly convey healthfulness in an otherwise unhealthy product” (Pomeranz 2013).
Dr. Marion Nestle, the renowned author and professor of nutrition at New York University, summed it up best in an August 2013 blog post titled, “FDA study: Do added nutrients sell products? (Of course they do).” She wrote:

“Food marketers know perfectly well that nutrients sell food products.  The whole point of doing so is to be able to make nutrient-content claims on package labels… Plenty of research demonstrates that nutrients sell food products.  Any health or health-like claim on a food product – vitamins added, no trans fats, organic – makes people believe that the product has fewer calories and is a health food… As I keep saying, added vitamins are about marketing, not health.”

The Food and Drug Administration’s system of Nutrition Facts labels would be one way to counter industry’s misleading marketing. Instead the labels compound the problem, because the labels’ percent Daily Values for nutrition content are outdated and are based only on adult dietary needs. Many of the FDA Daily Value levels were set in 1968 — more than 40 years ago — when nutritional deficiencies were still the primary concern. And the FDA does not require age-appropriate Daily Value labeling on products specifically targeted at children.
When a consumer picks up a box of cereal covered in cartoon characters that is clearly marketed to children and sees that one serving provides 50 percent of the Daily Value for vitamin A, she may think that it provides 50 percent of a child’s recommended intake. She would most likely be wrong. If the label has the signature small-print phrase, “Percent Daily Values are based on a 2,000 calorie diet,” that means that the nutrition label is based on the adult Daily Values.
Moreover, for vitamin A, zinc and niacin, the numbers described by FDA as “Daily Value for adults and children 4 or more years of age” actually exceed the Tolerable Upper Intake Levels for children 8 and younger (Table 2).
While a few products marketed for toddlers and young children do voluntarily list Daily Values specific for this age group, the FDA does not require such labeling. EWG found two brand-name products currently on the market that have labels for both adults and children younger than 4 — Post C is for Cereal and General Mills’ Cheerios (original formulation). The vast majority of cereals — including most children’s cereals — display just one set of Daily Values, those for adults.

* RAE (retinol activity equivalents) is the measure used today for expressing vitamin A activity. Health concerns apply only to preformed vitamin A, such as retinyl palmitate or retinol, not to naturally occurring vitamin A precursors such as beta-carotene and other carotenoids. The current FDA Daily Value for vitamin A is expressed in the outdated form of international units (IU). 5,000 IU correspond to 1,500 mg (micrograms) of retinol activity equivalents (RAE).

As a result of the excessively high Daily Values used for nutrition labeling and the FDA’s lax, unenforceable and outdated food fortification policy, millions of children are ingesting potentially unhealthy amounts of vitamins and minerals from fortified foods.
‹ Executive Summary Sources of Added Vitamins and Minerals in Children’s Food ›

How Much is Too Much?