Farm Subsidies Should Help Those Most in Need 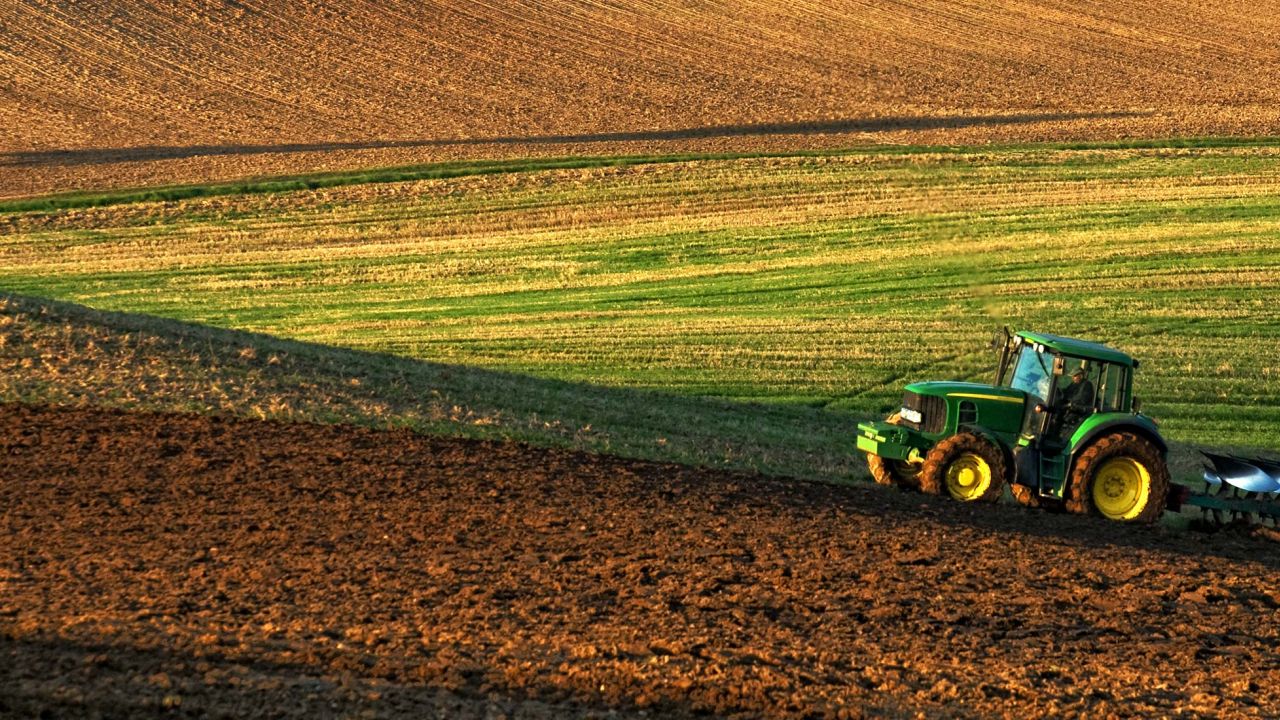 There’s a lot of doom and gloom in the air about the state of the farm economy. As commodity prices continue to fall from the historic highs of the last few years, advocates for the agriculture industry have been claiming that growers will have a hard time making ends meet. The House Agriculture Committee has held hearings to “focus on the farm economy,” inviting witnesses from Big Ag to declare that the sky is falling.

Some farm families are indeed suffering and Congress should make sure they get the help they need as crop prices return to more typical levels. But in the meantime, the woefully broken and inept federal farm subsidy programs keep sending most of the money to the most financially secure and prosperous farm businesses, whether they need help or not. Since 1995, fully 77 percent of subsidy dollars have gone to just 10 percent of all recipients, most of them members of complex partnerships and joint operations who may never set foot on a farm – let alone drive a tractor.

With the farm subsidy lobby gearing up to push for even more billions in federal largesse,  it’s a good time to take a hard look at the truth about the financial health of the farm sector.

Prices Are Returning to Normal Levels

It’s true that commodity prices for crops like corn and soybeans have been dropping over the last few years, but today’s prices are simply declining from what were historic highs. From 2008 to 2014, corn, soybean and wheat prices were the highest ever (Figure 1). Current prices are still mostly above the level of the mid-2000s, and are much higher than in the 1900s. 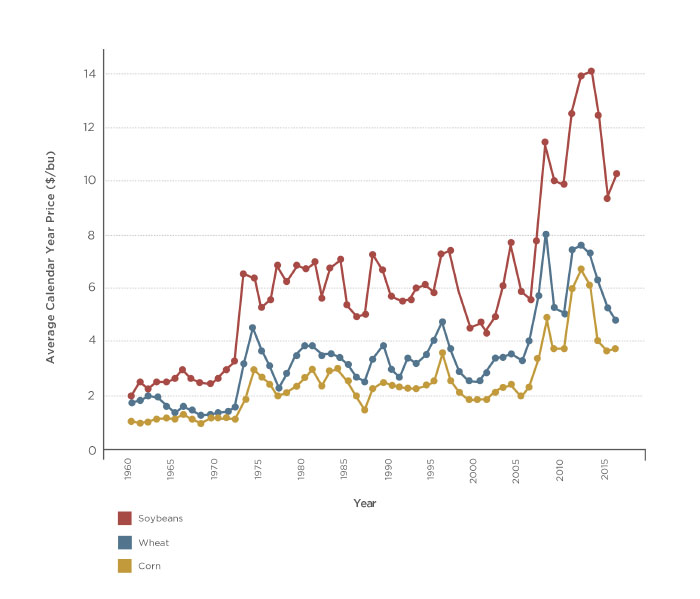 Farm household income includes all crops and animal products (such as livestock and dairy), indicating that it is not only grain growers who are doing well. And farm household income is continuing to rise, even though net income from agricultural operations is projected to decrease slightly. That’s because the majority of farm households earn much of their income from off-farm sources. Small farms with less than $350,000 in annual farm income make up almost 90 percent of all farms, and they get almost all of their income from off-farm sources.

Figure 2: Ninety percent of farms are small and depend mostly on off-farm income. 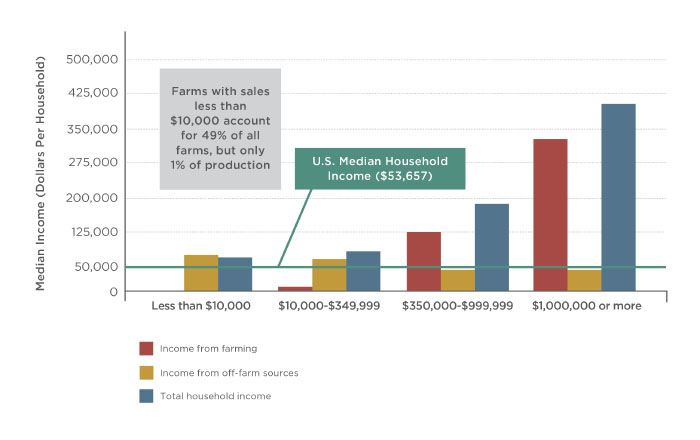 Although the farm sector’s debt-to-asset ratio is expected to increase moderately in 2016, it is still at a remarkably low 13.23 percent, well below the 40 percent threshold and a strong indicator that growers are still doing well financially. Moreover, agriculture’s debt-to-asset ratios over the last decade have been lower than for most proceeding years (Figure 3). 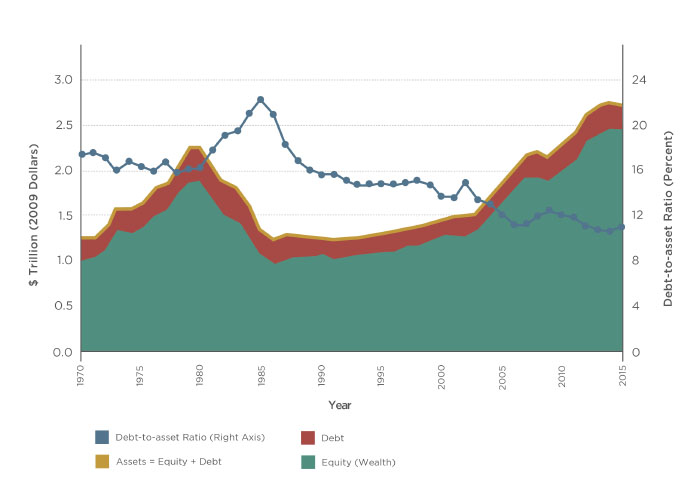 Figure 4: Farm loan delinquency rates are below the rates for all loans. 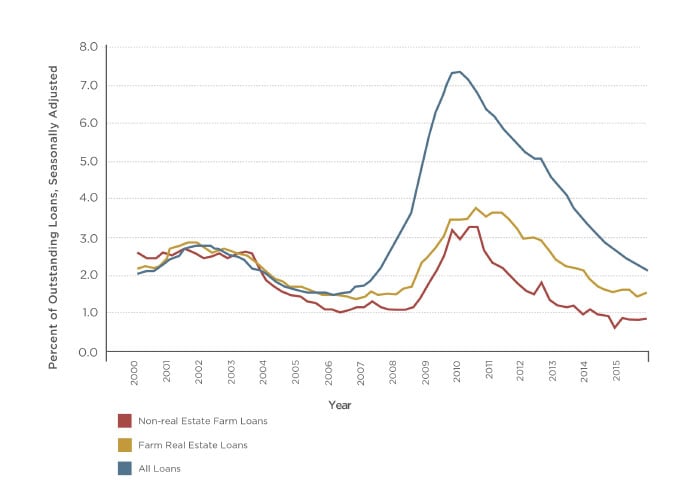 ‘Other’ Agriculture is Doing Well

Most of the discussion of the drops in commodity prices has focused on the grain crops that collect the most farm subsidies. But there is much more to the U.S. agriculture sector than grains. Corn, soybean and wheat combined, for example, accounted for only 26 percent of farm cash receipts in 2014. Sales of livestock, dairy, fruits, vegetables and nuts produced fully 62 percent of all farm cash receipts. (Figure 5).

Figure 5: Half of farm cash receipts come from livestock and animal products. 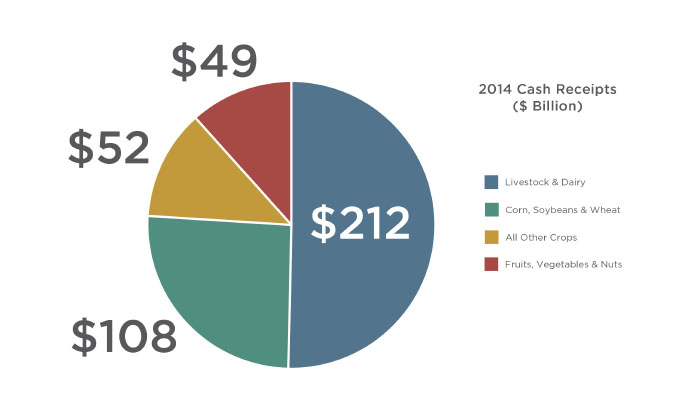 Most agriculture sectors did not enjoy the same historic increase in prices as grains did from 2008 to 2014. On the other hand, their prices aren’t falling nearly as much now as are corn, soybeans, wheat and other grains as they retreat from those historic highs.

Any assessment of the health of the farm economy must consider all sources of farm income, not just those favored crops that gorge on billions of dollars in federal subsidies.

The farm subsidy lobby is working overtime to use what it calls a “farm crisis” to deflect well-deserved criticism of the fatally flawed federal subsidy system that they’re desperate to protect. Current economic conditions, however, are nowhere near those of the real farm crisis in the 1980s. The farm businesses that collect the lion’s share of subsidies are not doing nearly as badly as the industry argues, especially compared to the rest of America’s families.

The federal farm subsidy system is badly broken. Help should be going to those families that depend on their farms for income and are struggling to stay afloat as production and land costs react to lower crop prices. But that’s not what’s happening.

Policymakers should ignore the subsidy lobby as it beats the drum for more and more taxpayer dollars and focus instead on fundamental reform of these programs so as to help those farm families in greatest need.