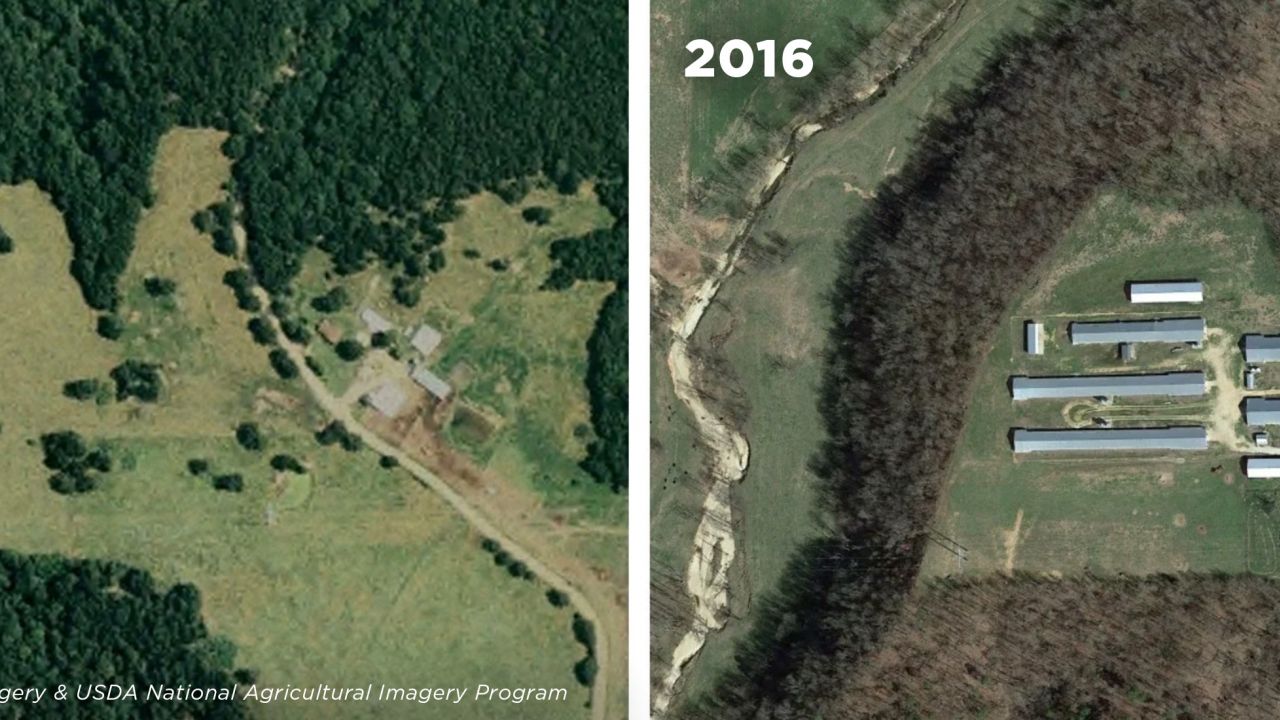 Scott Pruitt, President Trump’s nominee to lead the Environmental Protection Agency, has a penchant for making misleading claims about his record on the environment.

Liotta's bill would have restricted new or expanding poultry operations within a 100-year flood plain or within defined buffer zones, including within 1.5 miles of a state scenic river or outstanding resource water. The Illinois River, which flows from Arkansas into Oklahoma, carries both designations. The proposed legislation would have also prohibited spreading chicken manure on land within the buffer zones.

But by April 2002, Pruitt co-sponsored an amended version of the legislation, which was substantially weakened.

Despite these flaws, Pruitt boasted about the bill.

“[We] want [poultry operations] to occur in an environmentally safe way that doesn't threaten the water quality of northeast Oklahoma,” he said in an interview with KOTV-TV of Tulsa, Okla.

A look at the Illinois River watershed today shows that the law had little beneficial effect on Oklahoma’s environment.

Using aerial photos from Google and the U.S. Department of Agriculture’s National Agricultural Imagery Program, EWG analysts found 14 new or expanded factory chicken farms established within a mile of a scenic river or outstanding resource water. In total, the new and expanded operations created a net increase of  33 new poultry barns between 2003 and 2016.

Aerial photos comparing sites between 2003 and 2016 are available here.

Analysts scanned over 1,600 square miles of aerial photos of the Illinois River watershed on both sides of the Oklahoma-Arkansas state line, identifying 112 poultry operations with 449 barns in Oklahoma. Results were then compared to images from 2003 and 2013 to determine if the operation had previously existed, was newly created or had expanded. 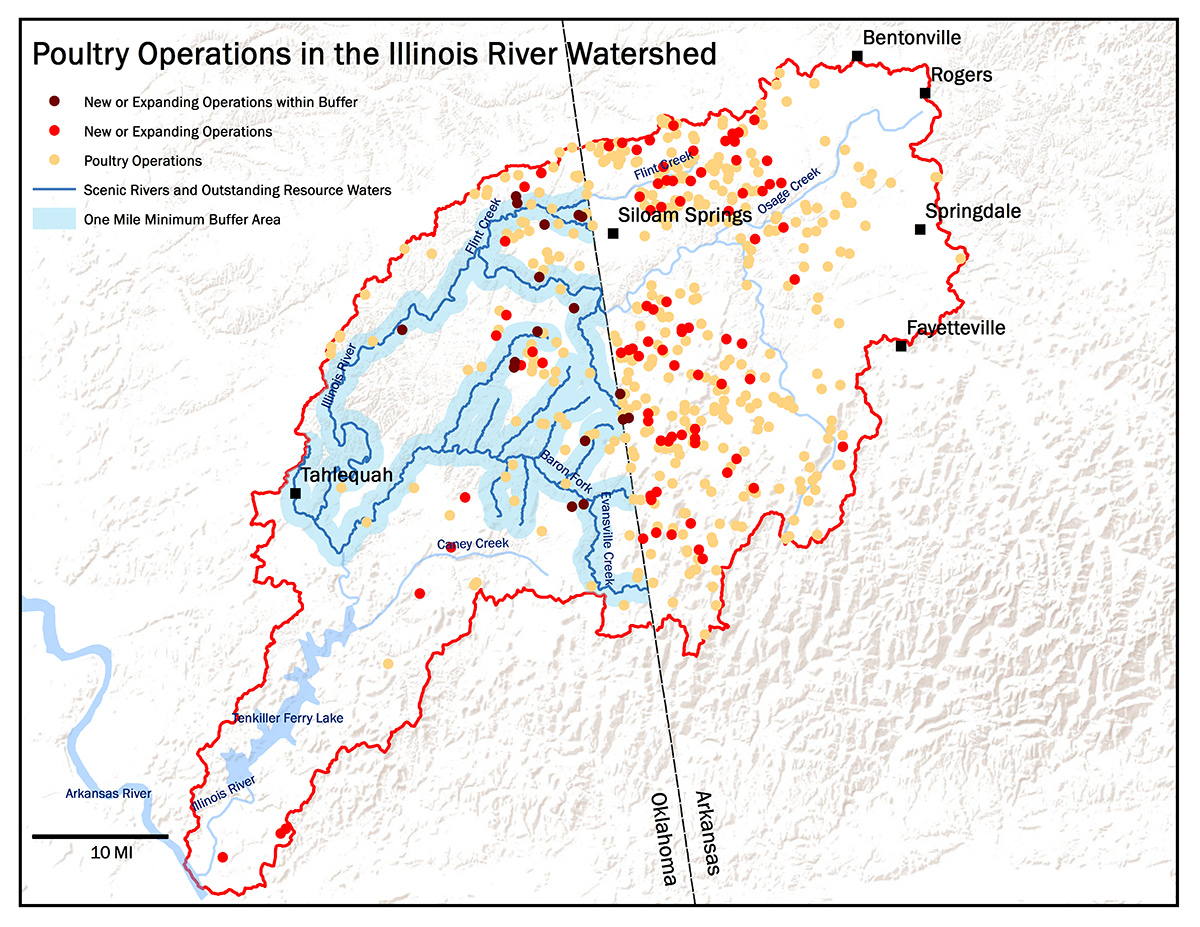 Either these new or expanding operations fall within the exemptions built into the weakened law, or Pruitt’s office failed to enforce the law.

EWG’s search of court and administrative filings found no evidence that Pruitt attempted to investigate or sanction these poultry operators while serving as attorney general from 2011 to 2016. EWG also filed an open records request with the Oklahoma attorney general’s office for documents on enforcement actions by the office and its communications about enforcement with the state Department of Agriculture, Food and Forestry, and other agencies, but has not yet received a response.

It's another example of Pruitt holding something up as an environmental victory that, upon further examination, doesn't hold water. In the case of protection of the Illinois River, this has become a key question in Pruitt’s nomination.

In his testimony before the Senate Environment and Public Works Committee, Pruitt sought to characterize a 2013 agreement as a historic effort to clean up the river, which is threatened by hundreds of thousands of tons of manure from millions of chickens raised in factory farms.

But the agreement developed by Pruitt and his Arkansas counterpart actually gave polluters more time to meet cleanup goals for the Illinois River and suspended any enforcement action by the attorney general’s office. In addition, Pruitt closed the attorney general’s Environmental Protection Unit and declined to pursue litigation against poultry companies polluting the river after poultry industry interests donated $40,000 to his 2010 campaign. 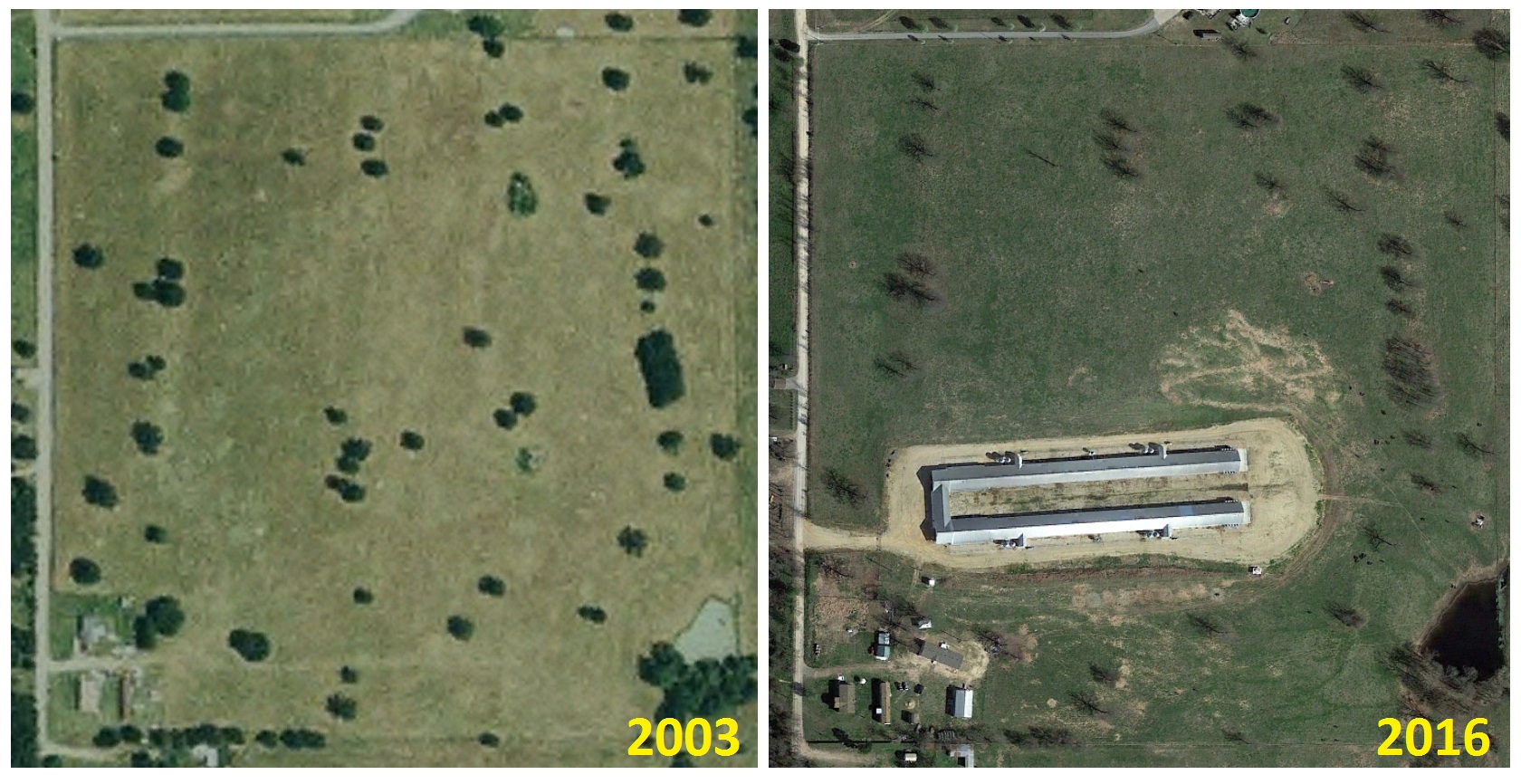 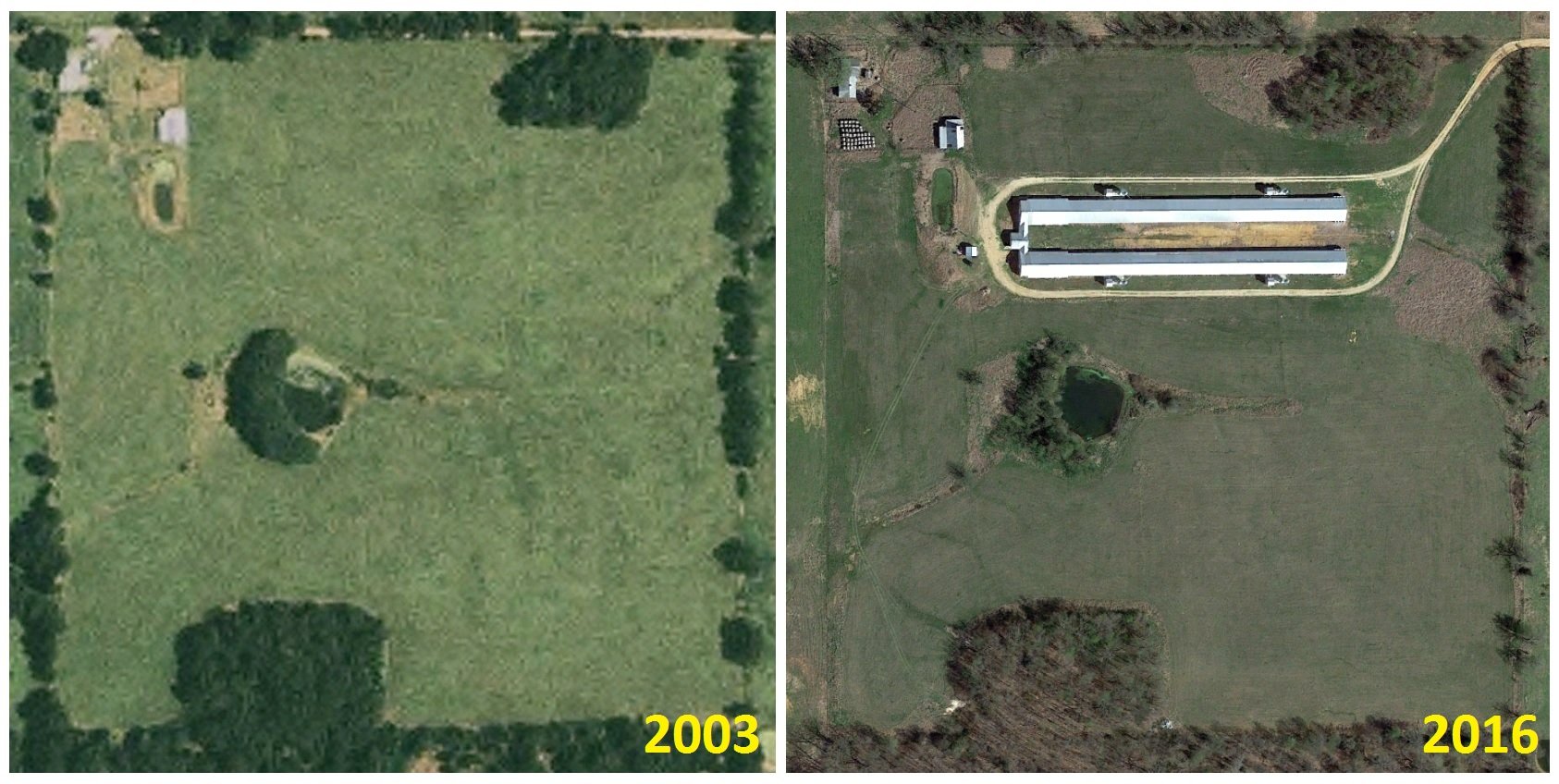 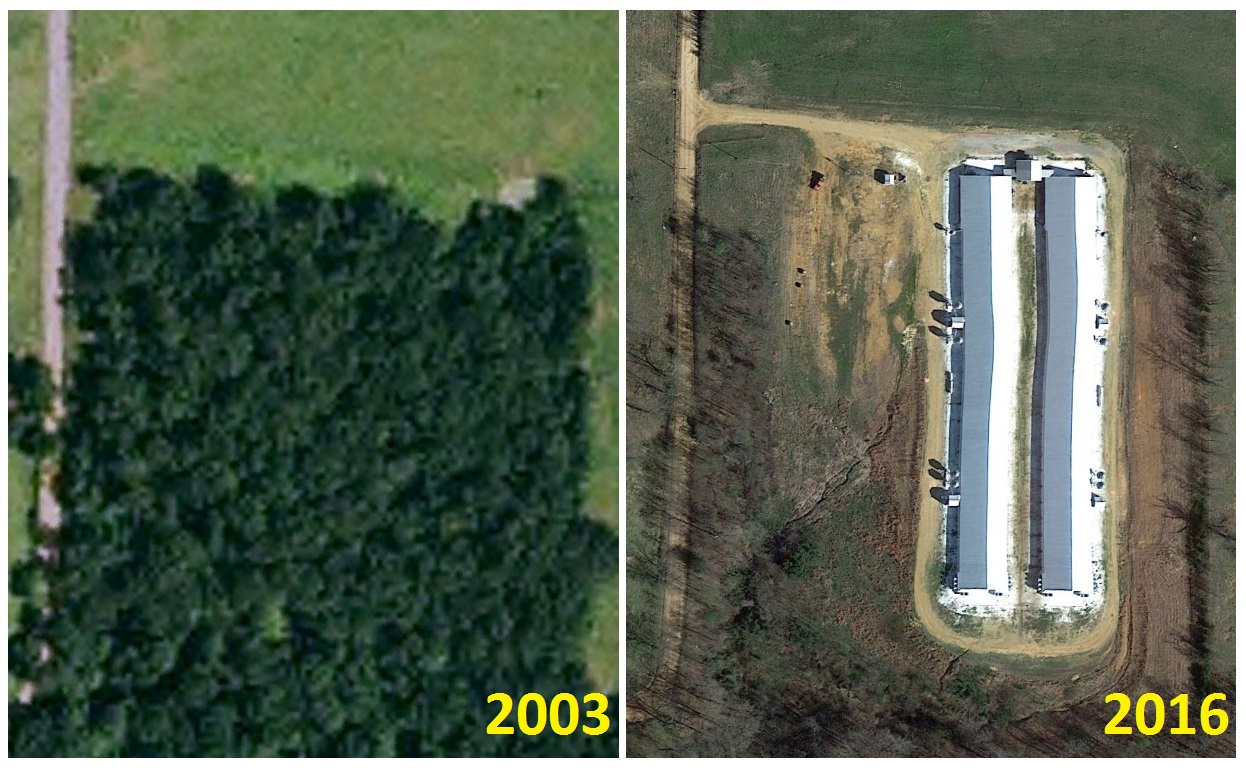 Enacted on April 15, 2002, Oklahoma HB 2349 restricts the construction or expansion of poultry feeding operations within one mile of any designated scenic river area, as specified by the state Scenic Rivers Act, or outstanding resource waters, as designated by the state Water Resources Board. The law also limits expansion of existing poultry barns except under certain circumstances. However, the law also narrowly applies its restrictions to out-of-state corporations, significantly weakening its impact. 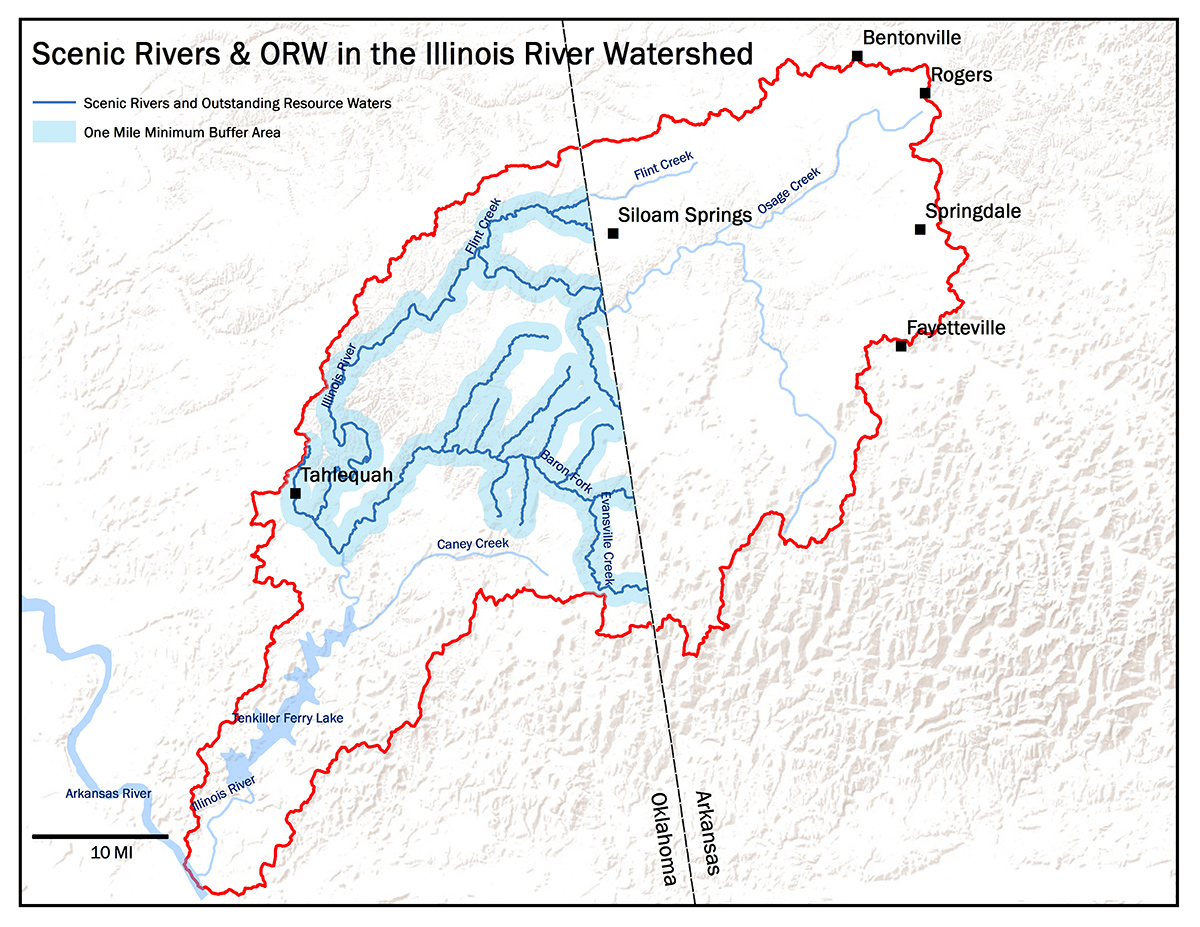 Data showing enforcement actions related to the location of poultry operations were only available from the state through an open records request. As inquiries were not immediately returned, analysts assessed aerial photos for the evidence of poultry facilities, typically represented by elongated buildings with steel roofs and feeder bins attached to one side. In the absence of ground verification, EWG is highly confident in its efforts to detect poultry barns with high resolution photography. 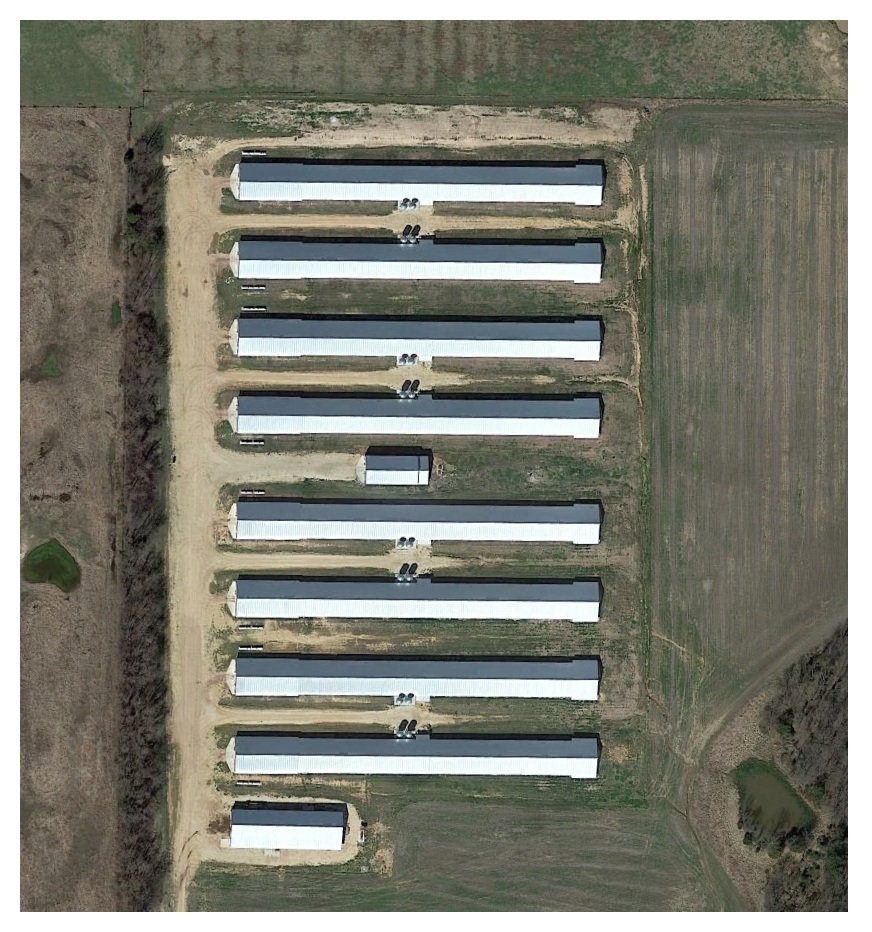 Analysts scanned over 1,600 square miles of Illinois River watershed imagery from 2016 and found 473 operations housing birds in 1,987 barns. Within Oklahoma there are 112 operations with 449 barns, and there are 361 operations with 1,538 barns in Arkansas. 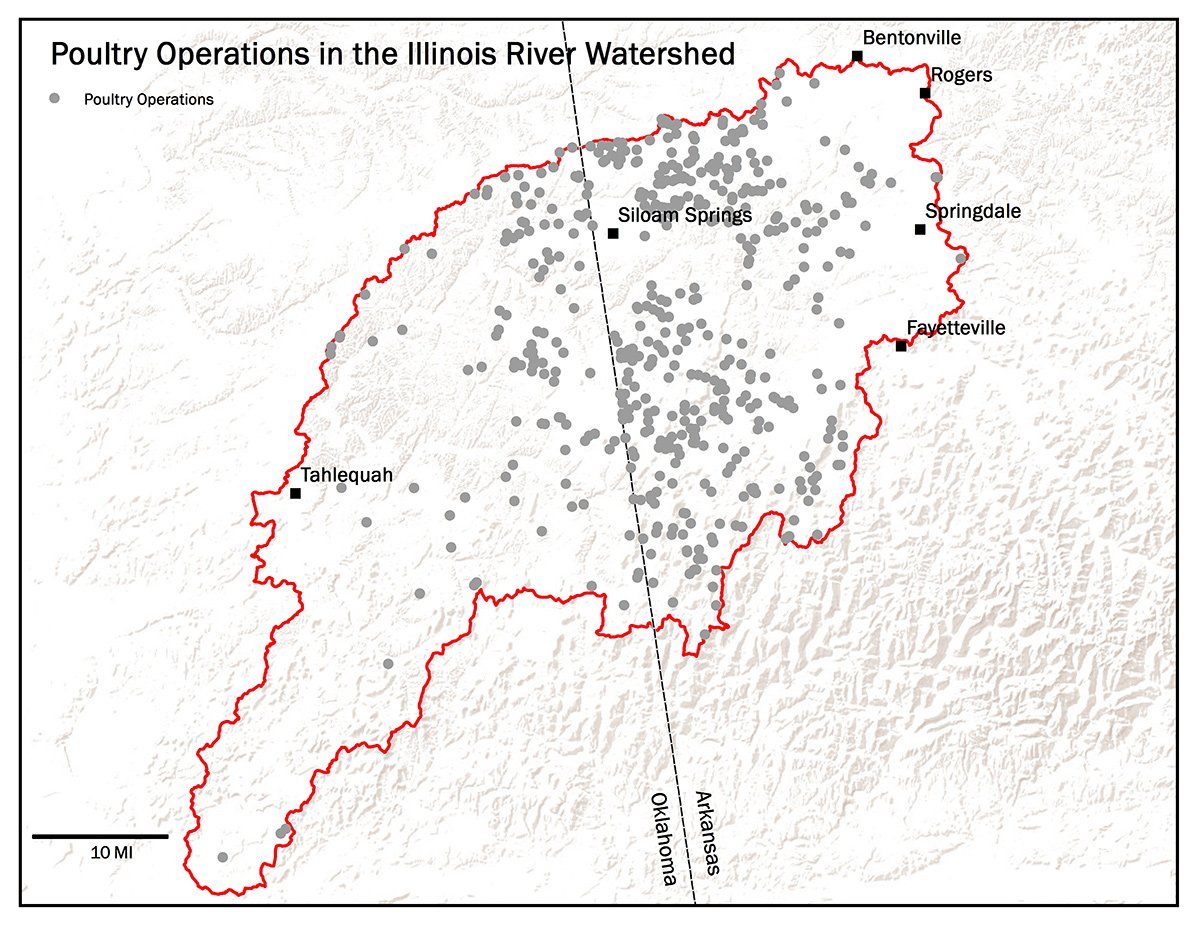 EWG detected over 470 poultry operations within the Illinois River watershed.

Once a presumed poultry operation was located, the 2016 imagery was compared to imagery from 2003 and 2013 to establish if the operation had previously existed, was newly created, or had expanded or contracted.

After creating a geographic location for all current poultry operation locations and associated barn counts, analysts tagged these locations if they were within one mile of rivers designated as scenic or outstanding resource waters. Geographic data representing the specified waterways was obtained from the Oklahoma Water Resources Board. 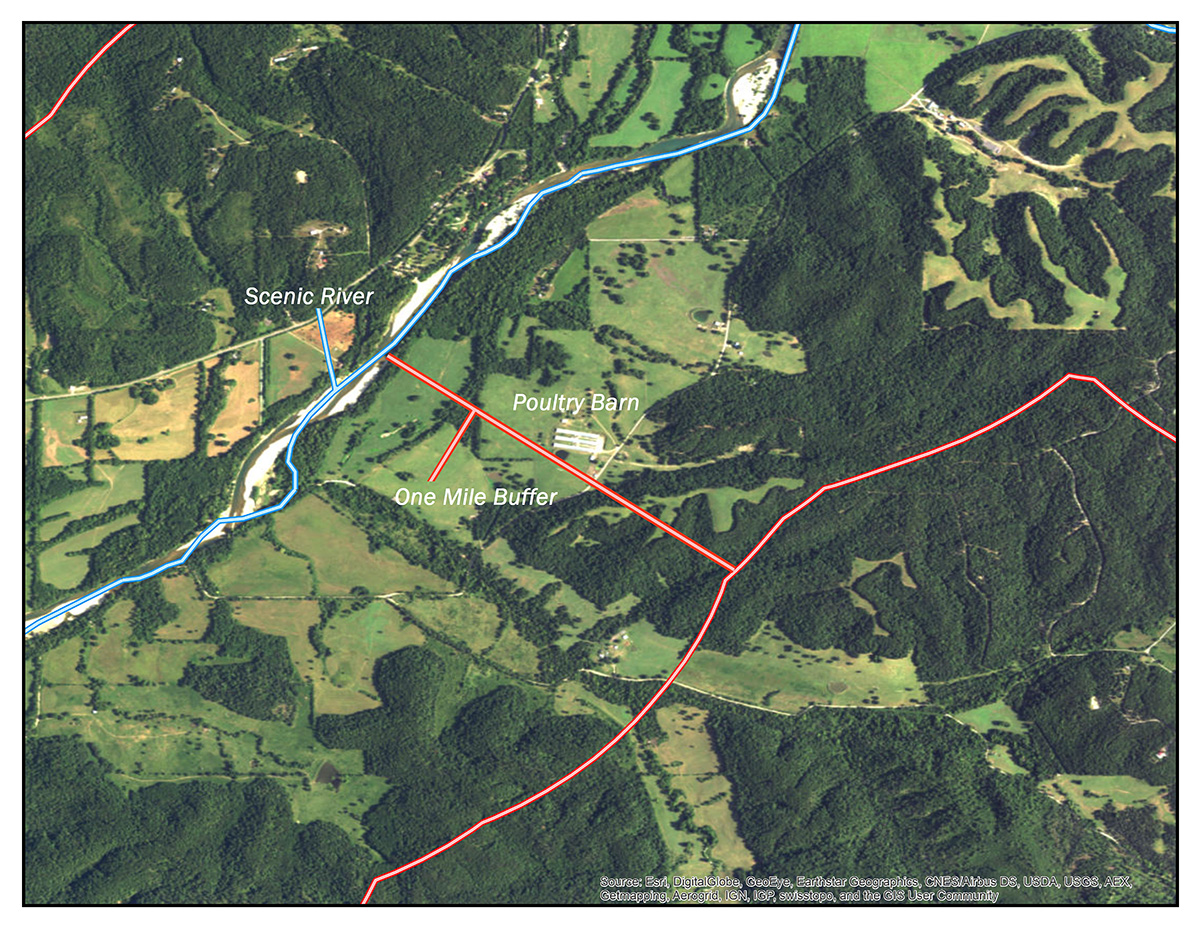 A poultry operation with three barns within one mile of the Upper Illinois River, an Oklahoma scenic river.