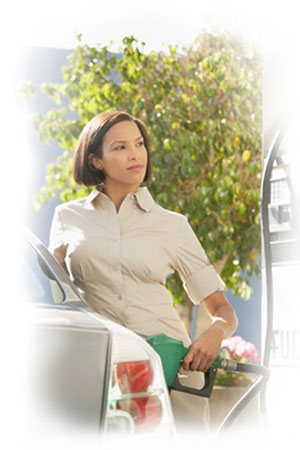 We all want to reduce dependence on fossil fuels and conserve natural resources. But using corn ethanol as transportation fuel is not the answer. Adding small, well-tested amounts of oxygenated additives like ethanol to engine fuel can reduce air pollution in targeted areas. This practice makes sense. But the corn lobby’s efforts to cast corn ethanol as an alternative transportation fuel is misleading.

Advanced biofuels, like those derived from perennial grasses, wood chips, or agricultural residues, are intended to conserve natural resources and not compete with the food supply. However, these so-called second generation biofuels are not yet on the market. Industry proponents claim they are “just around the corner,” but production is currently still in the early phases. EWG advises drivers to seek environmentally-responsible alternatives. They should use public transportation whenever possible and drive less. For tips to reduce your gasoline consumption and save money, click here.

Ethanol is a clear, colorless liquid made from starches like corn, sugar-laden plants such as sugarcane or cellulosic feedstocks made from grasses, agricultural residues like corn cobs and wood chips. Ethanol can be found in alcoholic beverages. It is also an industrial solvent. When mixed with gasoline, it can be used to fuel vehicles and other engines. As a fuel, it is more corrosive than gasoline. When fuel blends that contain more than 10 percent ethanol are used in small engines, they run hotter than pure gasoline. Engine damage or failure can result.

Ethanol powered the original Ford Model T, produced in the early 1900s. Prohibition forced car makers to switch to gasoline so that ethanol fuel wouldn’t be diverted to illegal use in intoxicating beverages. From the 1940s to the late 1970s, the automotive industry continued to rely on gasoline to power internal combustion engines because gas was cheaper than ethanol.

Over the last decade, a maze of energy and tax legislation designed to reduce America’s dependence on imported oil and fossil fuels has created incentives for ethanol production.
As a strategy to promote energy independence, in 2005, Congress enacted the federal Renewable Fuel Standard, requiring escalating production of ethanol, mainly from corn, to be blended into vehicle fuel. In 2005, the nation produced about 4 billion gallons of ethanol. In the 2007 energy bill, Congress greatly expanded the mandate by requiring fuel blenders to use 15 billion gallons of conventional biofuels (mainly corn ethanol) by 2015 and an additional 21 billion gallons of so-called second generation or advanced biofuels by 2022. The latter requirement contemplated that by 2010, the advanced biofuels industry would have taken off.

But that has not happened due to economic and technological barriers. Consequently, corn ethanol is the only domestically produced biofuel that is available in large quantities; this is unlikely to change in the near future.

Most American vehicle fuel is a mix of 90 percent gasoline and 10 percent ethanol. This mix is known as E10.

Ethanol industry lobbyists, eager to maximize industry profits, advocate fuel blends greater than 10 percent ethanol. They argue that automotive fuel is about to hit a “blend wall,” defined as the point at which more ethanol is produced than the market for E10 engine fuel can absorb. To sell more ethanol, these lobbyists have pressed for federal government approval to sell E15 fuel. To achieve that goal, they had to secure permission from the Environmental Protection Agency under the federal Clean Air Act. Last year, the EPA approved the sale of 15 percent ethanol blends, called E15, but only for cars manufactured in 2001 and later.1
Drivers and engine owners who disregard EPA’s directions to use E15 only in newer cars may find that older vehicles and small gasoline engines such as motors for boats, chain saws, snowmobile and leaf blowers incur serious damages. Since ethanol is a solvent, the E15 mix can corrode some fuel system parts, especially pumps and hoses. It also eats away at standard storage tanks and pipelines.

The ethanol lobby is promoting increased sales of “flex fuel” vehicles that can run on up to 85 percent ethanol, known as E85. But most owners of flex-fuel cars don’t fill them up with E85 because the more ethanol in fuel, the lower the vehicle’s gas mileage. Flex-fuel vehicles running on E85 will get about 27 percent lower gas mileage than with gasoline. The price of E85 doesn’t always compensate for lost fuel efficiency.

Most ethanol in the U.S. is produced from corn, but Brazil and some other countries use sugarcane as the primary feedstock.

The direct and indirect damage to the environment of corn and corn ethanol production outweigh any minimal benefits. Sensitive land like grassed buffers, streambanks and wetlands are being planted with corn to fulfil federal ethanol mandates and maximize corn growers’ profits.

Diverting some corn from food and feed to fuel pushes up food prices. Poor people in developing countries spend a larger percentage of their income on food, so they are disproportionately penalized by rising food costs.3 In 2011, 40 percent of the U.S. corn crop was used to produce ethanol. The expansion of the corn ethanol market increased corn prices by 36 percent from 2006 to 2009.4

p>No. Corn ethanol has displaced only three to four percent of gasoline imported into the U.S.5 Americans could displace that much gasoline by keeping tires properly inflated, using the right grade of motor fuel and obeying speed limits.

Yes. There are other ways to power or fuel a vehicle, including electricity, hybrids, battery technology, hydrogen, biodiesel and other biofuels like biobutanol that can be made from more sustainable sources. But there is no easy answer. If the electricity for an electric car originates at a coal-fired power plant, its share of carbon emissions can be hefty.

Some companies are developing “drop-in biofuels,” defined as biofuels that behave like gasoline and use existing infrastructure like gas pumps and storage tanks. These can be refined from potentially sustainable sources like wood and agricultural residues. The use of some biofuels may not reduce automotive gas mileage. But such fuels are still in the research stage. Much more work must be done before they are developed for the mass market.

That depends on the type and age of your vehicle and whether you can accept ethanol’s lower gas mileage. The EPA says that E15 should only be used in 2001 and later model year vehicles. However, every major carmaker has said that pumping E15 into these vehicle models may void the manufacturer warranty.
EWG has produced a handy wallet-sized card that lists which vehicles/engines can safely use which ethanol blends. The list of engines that can’t run on higher blends of ethanol is much longer than the list of those that can. Consumers should always check their owner’s manuals for specifics.

Print a copy of the guide by clicking here.

To be safe, stick with regular unleaded gasoline – and hope you can find it. Check with your engine manufacturer or mechanic to find out if your engine can safely run on E10, E15 or other ethanol blends. The U.S. Coast Guard has opposed the introduction of E15 into the nation's fuel supply because higher ethanol blends could cause marine engines to stall and leave boaters adrift.

Some small engines lack an oxygen sensor feedback control and cannot compensate for the higher oxygen content in higher ethanol blends. As a result, engines operating under the oxygen-rich conditions caused by high ethanol content can quickly overheat.

Not every state requires gas pumps to be labelled with the amount of ethanol the fuel contains. In some states, service stations can pass off E10 as regular gasoline. If you cannot find a label, ask a service station employee. If a pump says E85, the blend could range from 70 to 85 percent ethanol, depending on the retailer and seasonal adjustments. Engine operators who need precise information can buy fuel testing kits.

It makes sense to add small, well-tested amounts of oxygenated additives such as ethanol to engine fuel to reduce air pollution in areas out of compliance with federal regulations.

But the misguided effort to treat ethanol as an alternative transportation fuel has become a well-founded source of concern for consumers, environmental groups, livestock farmers, automobile makers, the anti-hunger community and the food industry.

For several years, ethanol producers and their lobbyists have been pushing for incentives to increase production beyond U.S. market needs. They have persuaded some lawmakers to support their cause, but increasingly the public has resisted because of ethanol's downsides. Click here to read a letter opposing extension of the ethanol tax credit, signed by EWG and 89 other groups. On June 16, 2011, the U.S. Senate acted on our recommendation and voted to repeal the ethanol tax credit and tariff by an overwhelming vote of 73 to 27.

Click here to learn about dangers posed by higher ethanol blends to your health and your engine's performance.

To find out more about E15, see EWG's other work: