Behind the Brand Curtain 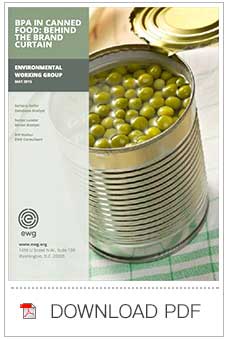 Many food companies have pledged publicly to stop using bisphenol A-based epoxy coatings to line their metal food cans, because BPA is a synthetic estrogen that scientists have linked to breast cancer, reproductive damage, developmental problems, heart disease and other illnesses.

But have they delivered?

The Environmental Working Group’s comprehensive survey of the American canned food marketplace has found that  some food companies and brands – from small independent labels like Amy’s to global food giants like the Hain Celestial Group – offer BPA-free packaging in all product lines, but others, such as Target Corp. and Hormel Foods Corp. still use cans containing BPA. Disturbingly, consumers have no reliable way of knowing whether a canned food item is BPA-free.

EWG’s survey of 252 brands produced by 119 companies1 between January and August 2014 found that:

The U.S. canning industry is at a critical turning point. Strong and clear regulatory guidance and increased transparency and accessibility of information are sorely needed so that consumers can be assured that cans are truly BPA-free and that the alternatives being substituted for BPA-based epoxy are safe.

The public cannot rely on current federal laws that regulate chemicals and food additives to ensure that BPA replacement chemicals are safer than BPA-based materials.

* In June 2015, ConAgra Foods informed EWG that it has made substantial progress removing BPA from its product packaging portfolio, with plans to complete its transition to BPA alternatives by the end of July 2015.

[1] The term “company” applies to an entity with control or influence over a brand’s use, or non-use, of BPA. The brand name and the company name are not always interchangeable. The “company” could also refer to the manufacturer, the distributor, the retailer, or any combination of these.

[2] The term “using BPA-free” is meant to indicate the company is either purchasing or manufacturing cans with no BPA added to the can lining. Companies can assure that cans are BPA-free but have less control over the food ingredients. For a more detailed explanation of the term, see Appendix A.

Get your copy of the Dirty Dozen Endocrine Disruptor Booklet