Childhood obesity rates in the U.S. are at an all-time high, while the quality of our children’s food has reached a new low.

Due in part to aggressive advertising by the food industry, pizza, soda, potato chips, French fries and dessert foods (like cookies and ice cream) account for 25 percent of the calories consumed by children between the ages of 4 and 8.  Teenagers get 33 percent of their calories from those same fatty, salty and sugary foods.

As a result, nearly one in five children is obese, and one in three at least overweight.

For decades, food companies have been targeting children with advertisements and marketing campaigns that promote these unhealthy and addictive products.  In 2006 alone, food and beverage companies spent $1.6 billion on child-targeted advertising.  Now, having succeeded in getting kids hooked on greasy foods and sugary sodas, these same companies are fighting government recommendations that would help children make healthier food choices and ultimately avoid the life-threatening health effects of childhood obesity.

Read on. In a few more paragraphs you'll want to give food company bigwigs a good piece of your mind—and with our help it'll only take about 15 seconds.

In 2009, Congress instructed the Federal Trade Commission, Food and Drug Administration, Centers for Disease Control, and Department of Agriculture to form an Interagency Working Group to examine the role of child-targeted advertising in the alarming rates of childhood obesity and recommend standards for marketing food to children under 18.

Last April, following an extensive review of the vast scientific literature, the Working Group published a draft set of recommendations.  The Working Group suggested that food companies adopt two principles that would be voluntary, not legally enforced by any regulatory agency:

Food companies, on the other hand, reacted by calling for a complete withdrawal of the guidelines.  Their recalcitrance exposed, yet again, their willingness to sacrifice the health of a generation if it means feeding the corporate bottom line.

The food industry wants to keep bombarding children and teens in their most formative and impressionable years with billions of dollars’ worth of marketing campaigns meant to instill brand loyalty and unhealthy eating habits.  The industry knows that, if subjected to public scrutiny, its child-targeted advertising practices and unhealthy product lines would elicit a strong backlash from parents, consumers and public health advocates.

Unfortunately for Big Food, its overreaction and opposition to the nutrition principles are only making its antagonism toward the issue of children’s health clearer.  While food companies continue to attack the government’s efforts, medical organizations and public health groups have vocally come out in support of the guidelines.  The American Cancer Society, American Dental Association, American Heart Association, the Yale-Rudd Center for Food Policy and Obesity and the New York and Philadelphia Departments of Health, to name a few, strongly support the Working Group’s proposals.  The American Academy of Pediatrics has lauded them as an important step toward achieving “a healthier population and a positive long-term public health impact.”

The industrial food lobby insists that “self-regulation of advertising has been very successful.”  The industry’s lobbying group— the Children’s Food and Beverage Advertising Initiative -- claims to be “committed to [the] goal of promoting healthier dietary choices to children.”  The factual and historical record, however, suggests that self-regulation of child-targeted advertising by the food industry is woefully insufficient at best and simply illusory at worst.

The Children’s Food and Beverage Advertising Initiative itself is evidence that food conglomerates will only take their customers’ health seriously when they fear government action and public scrutiny.  Its founding came on the heels of three years of calls for strong regulation of food marketing to children.

In 2004, the American Psychological Association advocated a restriction on television advertising to young children.  The next year, the Institute of Medicine agreed, with a report that asserted:

If voluntary efforts related to advertising during children’s television programming are unsuccessful in shifting the emphasis away from high-calorie and low-nutrient foods and beverages to the advertising of healthful foods and beverages, Congress should enact legislation mandating the shift on both broadcast and cable television. [emphasis added]

In 2006, the American Academy of Pediatrics called for its members to contact Congress in support of restrictions on junk food advertising.  Later that year, a joint task force of senators, Federal Communications Commission officials and public interest groups was formed to address the issue.  Only then, in November 2006, fearing growing support for regulation and facing increased public pressure, major food companies decided to join forces and create a self-policing plan.  What emerged was the Children’s Food and Beverage Advertising Initiative, a food industry lobbying group that fights efforts to address the epidemic of childhood obesity.

What does this organization boast as its first major accomplishment?  Allowing each of its member corporations to set its own advertising standards.

Far from serving as an example of responsible self-regulation, the industry initiative is evidence that the food industry simply will not regulate itself. 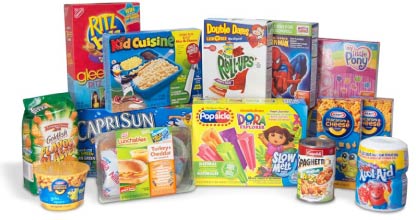 Examples of products high in sugar, fat, and salt that industry standards have approved for marketing to children.

Photograph courtesy of the Center for Science in the Public Interest.

Now the industry is lobbying Congress and calling on the Working Group to withdraw its preliminary proposal and rely on the industry’s own definitions of responsible advertising.  But we have seen what the food companies consider to be “responsible,” and our children are suffering the consequences.  In its latest attempt to avoid public scrutiny, the industry initiative published a set of uniform guidelines for its members to follow on the last day of the Working Group’s comment period.

And though the Working Group acknowledges that such guidelines are a step in the right direction, the industry would not make these last-ditch efforts if government officials and public health advocates simply relied on industry standards to guide child-targeted marketing.  Moreover, the initiative’s new guidelines only address advertising to children 12 years and under, not teens, and permit the marketing of junk food.  Under the initiative’s guidelines, for example, a meal consisting of French fries, sugary gummy snacks, a handful of corn and a hot dog could be marketed directly to children (see below).  A product packed with that much sodium and sugar would not meet the Working Group’s principles. 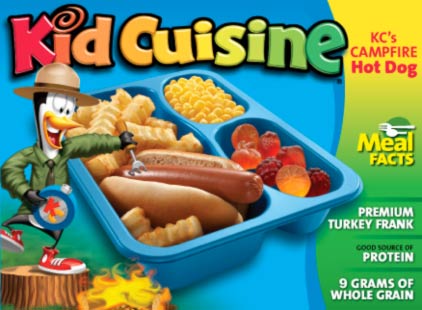 Bombarding children with advertising for unhealthy food and endorsing inadequate guidelines only when faced with a more robust set of principles is not responsible self-regulation.  It is the behavior of an industry that cares more about its bottom line than it does about its contribution to a nationwide childhood epidemic.