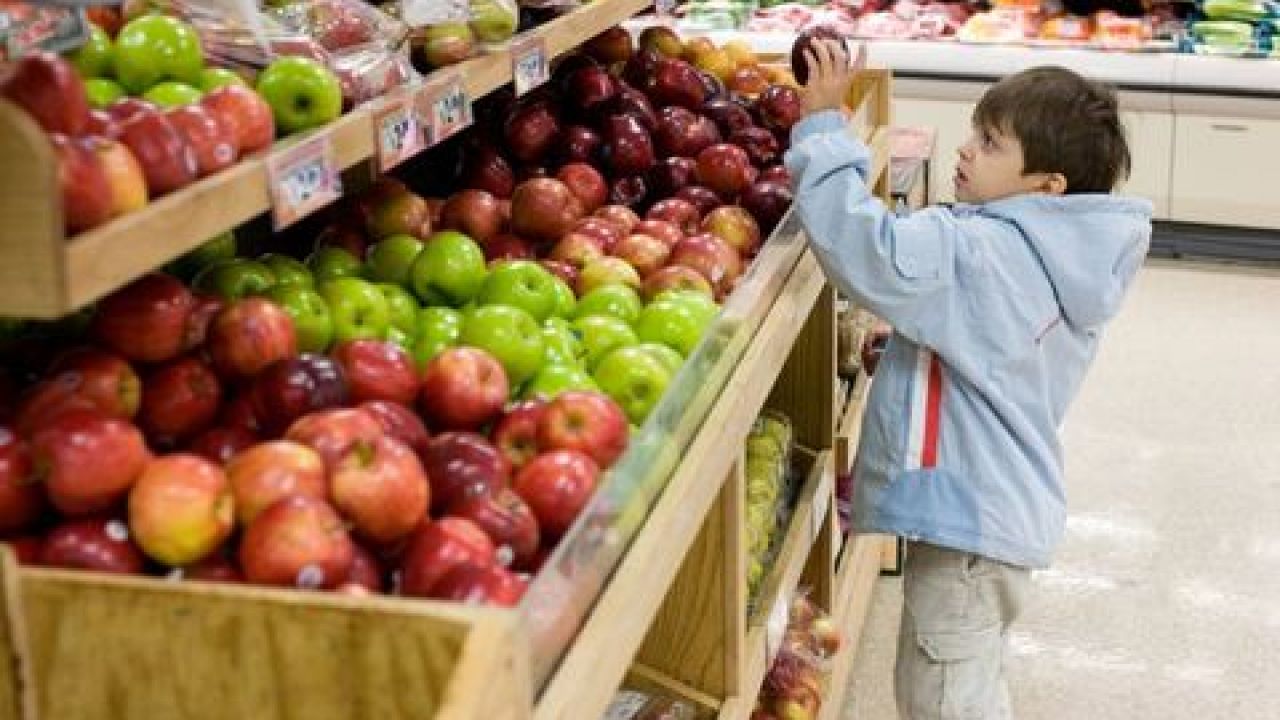 Those pyramids of apples in the produce section of supermarkets year-round may look fresh, but sometimes they’re not. Apples are harvested once a year, in the autumn.  Growers apply a mixture of chemicals and a waxy coating to apples to protect the fruit during cold storage, which can last as long as a year.

Apples top EWG’s Dirty Dozen list or the fourth year running because U.S. Department of Agriculture scientists detected an average of five or more pesticides on raw apple samples, including some at high concentrations.

One apple chemical in particular has triggered an intense international debate, set U.S and Europe on radically different courses and given Americans one more reason to buy organic apples.

As few Americans may realize, after harvest in the U.S. and some other countries, farmers and packers who use conventional growing methods drench most of their apples with diphenylamine, known as DPA, to prevent the skins of apples in cold storage from developing brown or black patches known as “storage scald.”  Tests of raw apples conducted by USDA scientists in 2010, the most recent year for which data are available, found DPA on 80 percent of them, with an average concentration of 0.43 parts per million (USDA 2012a).

European officials, on the other hand, are not satisfied that DPA is harmless. In June 2012, the European Commission issued a rule banning the use of DPA on apples and other fruit grown in its 28 member nations (EC 2012). As of March of this year, apples and pears imported into the European Union can contain no more than 0.1 part per million of DPA (EC 2013). According to the USDA Foreign Agricultural Service, the restriction on DPA could cost U.S. apple growers $20 million in annual export sales to Europe (USDA Foreign Agricultural Service 2013).

Since DPA is sprayed on fruit after it is harvested, USDA tests of apples find it more often and at greater concentrations than most other pesticide residues. (DPA is regulated as a pesticide, but it does not kill insects, weeds or fungal growth.)

The first DPA-based pesticide chemical was registered with the U.S. government in 1962. The World Health Organization has evaluated the safety of DPA several times since the 1960s, with a particular focus on impurities that could be more toxic than DPA itself. Most recently, WHO said that long-term exposure was “unlikely to present a public health concern” (WHO/FAO 2007). The U.S. Environmental Protection Agency reviewed the safety of DPA in 1998 and concluded that its use posed no unacceptable risk to people or the environment (EPA 1998). Today, the EPA allows maximum concentrations of DPA of 10 parts per million on apples and 5 parts per million on pears.

European regulators, to the contrary, ascribe the absence of evidence of harm to poor investigation.  They concluded that the manufacturers of DPA had not provided enough testing to prove that their product and any chemicals formed when it broke down were safe (EFSA 2012).

Of particular concern to EC officials was the possible presence on DPA-treated fruit of nitrosamines, a family of potent carcinogens. Nitrosamines contaminate food, cosmetics and latex rubber. They cause cancer in laboratory animals, and some studies have found that people eating foods with nitrosamines have elevated rates of stomach and esophageal cancers (NTP 2011). Nitrosamines form when nitrogen-containing compounds combine with amines, which are compounds derived from ammonia. Since the 1970s, government agencies have regulated foods and consumer products to limit concentrations of chemicals that can serve as building blocks of nitrosamines.

For example, the USDA requires manufacturers of a type of inexpensive mass-produced bacon known as “pumped bacon” to add ingredients that minimize nitrosamine formation in the meat. To make pumped bacon, meat packers inject ingredients directly into the meat to speed up the curing process and add bulk. Because the process poses a high risk for nitrosamine formation, the USDA requires all pumped bacon to be tested for nitrosamines. The law says that bacon can have "no confirmable levels of nitrosamine” after testing with sensitive instruments that can detect the dangerous impurity down to 10 parts per billion. If repeated tests confirm that a meat packer’s bacon contains nitrosamine concentrations of more than 10 parts per billion, the consequences aere severe:  federal food safety inspectors must seize the plant’s bacon inventory and shut down its bacon production line until the company fixes the problem. (CFR 2014 Title 9. §424.22).

Since Americans eat nearly 10 pounds per person of raw apples every year (USDA 2012b), even low levels of nitrosamines on raw apples, or in apple juice and applesauce could potentially pose a risk to human health.

The EPA’s 1998 review found a small quantity of a nitrosamine as an impurity in a sample of DPA. The agency calculated that the risk from this impurity was low.  Several small studies have detected nitrosamines on DPA-treated apples.

European regulators theorized that nitrosamines could be generated if DPA combined, either during storage or when fruit was processed, with a source of nitrogen, an element ubiquitous in the environment.  They had little hard evidence that this chemical reaction was, in fact, occurring.  Beginning in 2008, they pressed makers of DPA for test data that showed whether nitrosamines or other harmful chemicals formed when containers of DPA sat on shelves, when fruit was treated with DPA and stored for a long time and when DPA-treated fruit was processed into juices, purees and sauces (EFSA 2008).  The industry provided one study that detected three unknown chemicals on DPA-treated apples at concentrations greater than 50 parts per billion, but it could not determine if any of these chemicals, apparently formed when the DPA broke down, were nitrosamines. It did not study whether nitrosamines were being formed on DPA-treated apples made into apple juice or applesauce. Since U.S. law and regulations bar nitrosamine concentrations above 10 parts per billion in pumped bacon, we consider it essential that DPA producers prove that DPA-treated apples and apple products contain little to no nitrosamines.

In 2012 the European Food Safety Authority, a government body that evaluates the risk of pesticides for the European Commission, concluded that the industry had not provided sufficient information and that the many data gaps made it impossible to confirm the safety of DPA (EFSA 2012). The full Commission banned the use of DPA on European apples and pears in June 2012 (EC 2012), and it followed through with a binding regulation, to take effect in March of this year, which reduced the allowable level of DPA on imports to 0.1 part per million (EC 2013).  It  did not set the permissible level of DPA at zero because untreated apples can sometimes acquire traces of DPA when warehoused in storage facilities which have also held DPA-coated apples. The regulators reasoned that people would not be at risk from an amount as small as 0.1 part per million.

The U.S. EPA has taken no steps to respond to the European ban and nor to the concerns about nitrosamines expressed by European food safety officials. Earlier this year three scientists in the U.S. EPA Office of Pesticides, which is tasked with pesticide safety reviews, told EWG they were unaware of the new European ban and import restrictions. They said the agency had no plans to reassess DPA safety in light of the European actions.

American apple growers who use conventional methods and DPA manufacturers have charged that Europe’s ban and tight import controls are excessive.  But until regulators can rule out the possibility that DPA could break down to generate of nitrosamines or other harmful chemicals on raw and processed apples, people could be at risk.

EWG believes that the European regulators have taken the steps necessary to protect their citizens from avoidable health risks. The federal Food Quality Protection Act requires that EPA review pesticides every 15 years to ensure they pose no harm to people. EPA hasn’t reviewed DPA since 1998, 16 years ago. The agency should immediately initiate a new review of the chemical. Without better information about nitrosamine formation on raw and cooked apples, it cannot prove that DPA exposures are safe.

Until the latest scientific techniques can determine the safety of DPA, people can reduce their risk of ingesting nitrosamines and other potentially harmful chemicals by eating organic apples, apple juices and applesauce.

EC. 2012. European Commission Implementing Regulation (EU) No 578/2012 of 29 June 2012 concerning the non approval of the active substance diphenylamine, in accordance with Regulation (EC) No 1107/2009 of the European Parliament and of the Council concerning the placing of plant protection products on the market. Official Journal of the European Union. L 171 55:2 http://eur-lex.europa.eu/LexUriServ/LexUriServ.do?uri=OJ:L:2012:171:FUL…