SAN FRANCISCO – Middle-income and working-class Californians represented by far the largest block of the million-plus households in the state that installed rooftop solar in 2021, according to a new Lawrence Berkeley National Laboratory study.

The study shows how essential California’s subsidies for rooftop solar are in helping deploy the clean, renewable power source across the state. Solar not only cuts rates for consumers suffering from astronomical bills caused by California’s monopoly utilities like Pacific Gas & Electric, but it also helps to fight the climate crisis.

California’s Public Utilities Commission, or CPUC, is expected to announce a revised plan for the future of the rooftop solar program after the elections on Nov. 8. PG&E and two other utilities want to decimate the popular initiative, because solar is their only competition, but the Berkeley Lab findings help make the case for retaining it.

The findings were published in the latest edition of the Berkeley Lab’s Residential Solar-Adopter Income and Demographic Trends report, which analyzes address-level data for 2.8 million households across the U.S. that adopted rooftop solar last year. Roughly half of those installations occurred in California. The study found about one-third of Golden State households that installed rooftop solar in 2021 were solidly working- and middle-class families, with annual incomes between $50,000 and $100,000. Only 12 percent of households had annual incomes of $250,000 or more.

The report analyzed trends in residential solar installations based on income, education, occupation, location, home values, race, ethnicity and more. The findings also show that more middle-income families are adding solar – the median income among all U.S. households that installed solar in 2021 was roughly $110,000, compared to $129,000 in 2010.

Berkeley Lab also found the income of households adopting solar is declining over time, as it becomes more equitably distributed across the U.S.

One reason for the shift is states like California offering financial incentives known as net metering, which helps people save on their utility bills by allowing them to sell any surplus energy their solar panels generate back to the grid. Another reason for the shift is a federal tax credit that cuts the cost of panels and makes solar affordable for moderate income families. 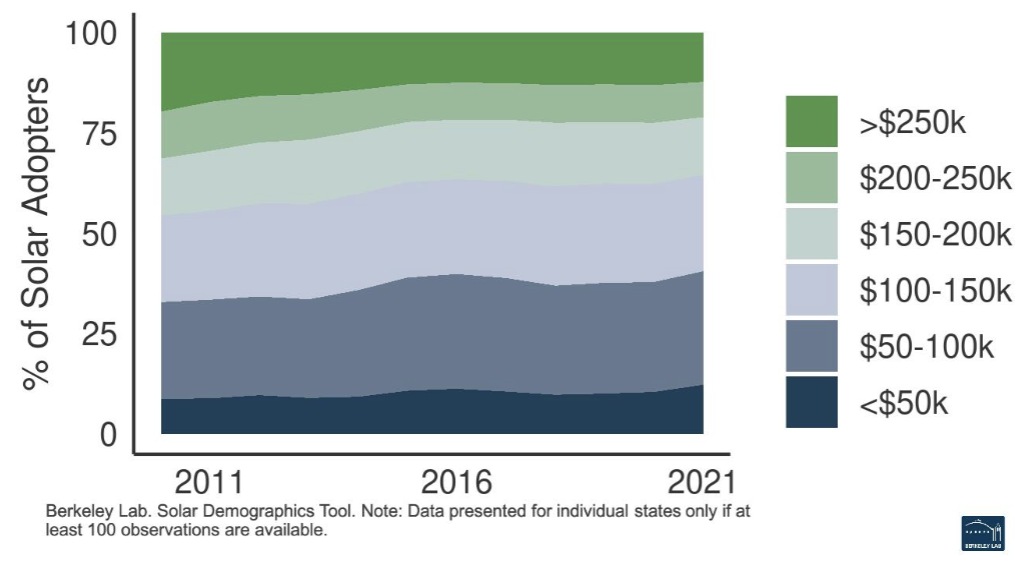 In March, Berkeley Lab researchers published a separate study showing financial incentives from states like California and Connecticut to low-income and working-class families have helped drive adoption of residential rooftop solar. Four out of five households assessed in the two states wouldn’t have had solar without the incentives.

California has rooftop solar panels on more than 1.5 million homes, small businesses and other structures, because of the state’s incentives established in 2006.

But millions of California residents, including working-class families, could soon no longer be able to afford to install solar panels, if the CPUC sides with PG&E and the other two monopoly investor-owned electric utilities trying to quash the program.

The utilities consider residential rooftop solar their only source of competition in California. They are pressuring the CPUC to adopt their plan to eliminate incentives and replace them with a steep solar tax of around $50 per month on residents who install rooftop solar. The plan would drastically reduce the credits households could receive toward their monthly bills for selling excess electricity and put solar out of their reach.

“The CPUC and Gov. Newsom should follow the facts, not the narrow interests of the power companies, and reject their plot to rip away access to rooftop solar for working-class Californians. The data shows these are the folks relying the most on the state’s residential solar program,” said Cook.

The utilities now argue that net metering is unnecessary after enactment of the federal Inflation Reduction Act, since the law extends the 30 percent residential investment tax credit for 10 years. But the utilities’ proposed solar tax would eliminate the financial incentive for working-class customers to invest in solar, since the amount they’d save on their electric bills would be miniscule compared to what they save with the current net metering policy in place.

The CPUC issued its original proposal to approve the utility-backed plan almost a year ago but quickly withdrew it after widespread outcry. At that time, tens of thousands of citizens, and the Solar Rights Alliance – made up of more than 600 environmental justice, clean energy, and consumer watchdog advocacy groups – warned the plan would make solar unaffordable for working-class families.