The Problem With Vitamin A 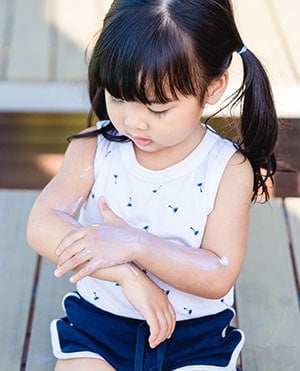 A 2012 study by U.S. government scientists suggests that retinyl palmitate, a form of vitamin A, may speed the development of skin tumors and lesions when applied to the skin in the presence of sunlight (NTP 2012). Officials in Germany and Norway have cautioned that retinyl palmitate and other vitamin A ingredients in cosmetics could contribute to vitamin A toxicity when combined with excessive exposure to the sun (German BfR 2014, Norwegian SCFS 2012a). The evidence for these effects, though not definitive, is troubling.

Vitamin A is an antioxidant added to skin products because manufacturers believe it slows skin aging. Oral ingestion of vitamin A can reduce the risk of squamous cell carcinoma in people at high risk for skin cancer (Moon 1997), but the 2012 federal study raised the possibility that it may speed the growth of cancerous tumors when used on skin exposed to sunlight.

Scientists have found that vitamin A can spur excess skin growth, known as hyperplasia, and that in sunlight, retinyl palmitate can form small molecules called free radicals that damage DNA (NTP 2000).

In 2010, EWG analyzed raw study data published on the website of the National Toxicology Program, the federal interagency research group that tested retinyl palmitate in partnership with the Food and Drug Administration’s National Center for Toxicological Research. EWG concluded the government scientists had produced evidence that the development of skin tumors was accelerated when hairless mice were coated with a cream laced with vitamin A and then exposed to ultraviolet light every day for a year (NTP 2009). The daily exposure was equivalent to nine minutes of sunlight at its maximum intensity.

In January 2011, the NTP Board of Scientific Counselors affirmed NTP staff’s conclusion that both retinyl palmitate and retinoic acid, another form of vitamin A, sped development of cancerous lesions and tumors on UV-treated animals (NTP 2011, 2012). Sunscreen scientists and trade groups dispute EWG’s warning about retinyl palmitate on sun-exposed skin (Wang 2010).

Now the NTP and FDA have spent more than a decade studying the photocarcinogenicity, or UV-catalyzed skin cancer potential, of vitamin A ingredients. In 2012 the FDA launched a follow-up study to confirm the NTP finding in a second lotion using the same hairless mouse model. The European Scientific Committee on Consumer Safety, or SCCS, reviewed the hairless mouse study and concluded that the NTP study “may indicate” that the ingredients are photocarcinogenic, but it is difficult to extrapolate this finding to risks of skin cancer for humans because of the differences in the skin sensitivity of hairless mice and humans (SCCS 2016).

EWG calls for sunscreen makers to voluntarily stop adding this ingredient to sunscreens voluntarily until there is proof it can be safely used on sun-exposed skin. More details on the studies of vitamin A and skin cancer are available here.

Cosmetics can contribute to vitamin A toxicity

Addressing a separate issue, the German and Norwegian governments have cautioned that retinol and other vitamin A ingredients in cosmetics could cause people to take in toxic amounts of vitamin A.

Too much preformed vitamin A, including retinol, retinyl palmitate, retinyl acetate and retinyl linoleate, can cause a variety of health problems, including liver damage, brittle nails, hair loss, and osteoporosis and hip fractures in older adults. Excessive vitamin A can also cause serious skeletal birth defects in a developing fetus. For that reason, Norwegian health authorities have cautioned women who are pregnant or breastfeeding to avoid cosmetic products with vitamin A (Norwegian SCFS 2012b).

Many Americans and Europeans get a lot of preformed vitamin A in their diet, and Norway and Germany have cautioned that any additional exposure from skin products could increase the number of people at risk of excessive vitamin A. German regulators recommended restricting the concentration of vitamin A in cosmetics for face and hand products, and barring the substance in products for the lips and body (German BfR 2014).

In 2016 the European SCCS reviewed the use of vitamin A in body care products. It concluded that it would not restrict preformed vitamin A in cosmetics because it was unlikely that these products alone would expose consumers to harmful amounts of the vitamin. But since retinyl palmitate and related ingredients are not used in European sunscreens, the analysis did not consider additional exposure from these products. The committee noted that when added to the significant exposures from food, “any additional source of exposure, including cosmetics products, may exceed this [recommended daily upper limit]” (European SCCS 2016).

EWG remains concerned about the contribution of retinoids in skin lotions, lip products and sunscreens to the risk of excessive vitamin A exposure. Americans have high levels of preformed vitamin A in their diet from liver, fish oils and the intentional fortification of cereals and milk. The ingredients added to fortified foods are widely used in cosmetics, including lotions and lip products.

EWG urges U.S. regulators to assess exposures to vitamin A and consider restrictions on food fortification and body care products for populations at risk of overexposure.

Nearly a decade after EWG sounded the alarm about retinyl palmitate, the FDA still hasn’t completed follow-up studies that will allow the agency to take a position on the safety of vitamin A and related chemicals in cosmetics and sunscreens.