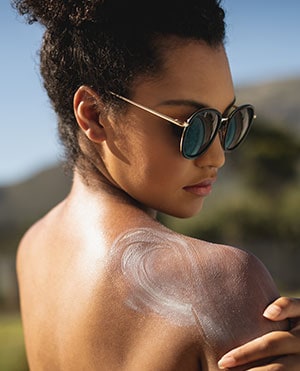 Americans continue to be diagnosed with melanoma, the deadliest form of skin cancer, at steadily rising rates.

The reasons for this trend are unclear, as are strategies for preventing it. We don’t know the exact cause of melanoma, but scientists have established that risk factors include family history, indoor tanning, fair skin, freckles, moles, ultraviolet radiation and severe sunburns (CDC 2014).

In early 2019, the Food and Drug Administration released its final draft sunscreen monograph, which states that there is growing evidence linking ultraviolet A, or UVA, exposure to skin cancers. To protect consumers, the agency proposed strengthening the required UVA protection of sun protection factor, or SPF, products. EWG has long urged the FDA to establish these stronger standards, but since the monograph has yet to be finalized, products that provide inadequate UVA protection are still legally allowed for sale.

Each year an estimated 99,800 Americans will be diagnosed with melanoma, and about 8,000 will die from it (NCI 2022). Men have higher rates than women, and the American Cancer Society has estimated that about twice as many American men are expected to die from melanoma as women.

Melanoma is a complex disease with many unanswered questions, but sun exposure appears to play a role. Both UVA and UVB rays can cause melanoma. In the general population, there is a strong correlation between melanoma risk and how often a person has been sunburned, particularly during childhood (Dennis 2003).

The use of artificial tanning beds dramatically increases melanoma risk (Coleho 2010), and their use before age 30 increases the risk of developing melanoma by 75 percent, according to calculations by the International Agency for Research on Cancer, or IARC. For this reason, in 2014 the FDA reclassified tanning beds to require new warnings stating that they can damage skin and shouldn’t be used by anyone under age 18.

Every major public health authority – the FDA, the National Cancer Institute and the IARC – has concluded that the available data do not support the assertion that sunscreens alone reduce the rate of skin cancer (FDA 2011a, IARC 2001b, NCI 2021).

A 2011 study of Australians found they cut their risk of melanoma in half by age 50 when they applied SPF 15 sunscreen daily, wore hats and avoided the sun in other ways (Green 2011). Additional studies show that sunscreens protect against melanoma (Autier 1995, Green 2010, Westerdahl 2000, Wolf 1998). Other studies have not reached such clear conclusions. Some suggest sunscreen users are at increased risk of melanoma (Gorham 2007).

Stanford University dermatologists who reviewed data from a national survey by the Centers for Disease Control and Prevention concluded that people who relied solely on sunscreen for sun protection got more sunburns than people who reported infrequent sunscreen use but wore hats and clothing to shield themselves from the sun (Linos 2011).

In addition to skin cancer, exposure to sunlight – including both UVA and UVB rays – is associated with damage to skin cells and DNA, and to advanced skin aging. To prevent skin damage and skin cancer effectively, American sunscreens should provide better UVA protection. This won’t happen in all products until the FDA sets higher standards for UVA protection and approves modern sunscreen ingredients with superior UVA filtering and stability.

In the absence of truly protective regulations, consumers are in the worst possible position – likely to think their sunscreen provides more protection than it does, then staying out in the sun longer, thereby increasing their risk of skin cancer and skin damage.