Will the Real Ethanol Beneficiaries Please Stand Up? 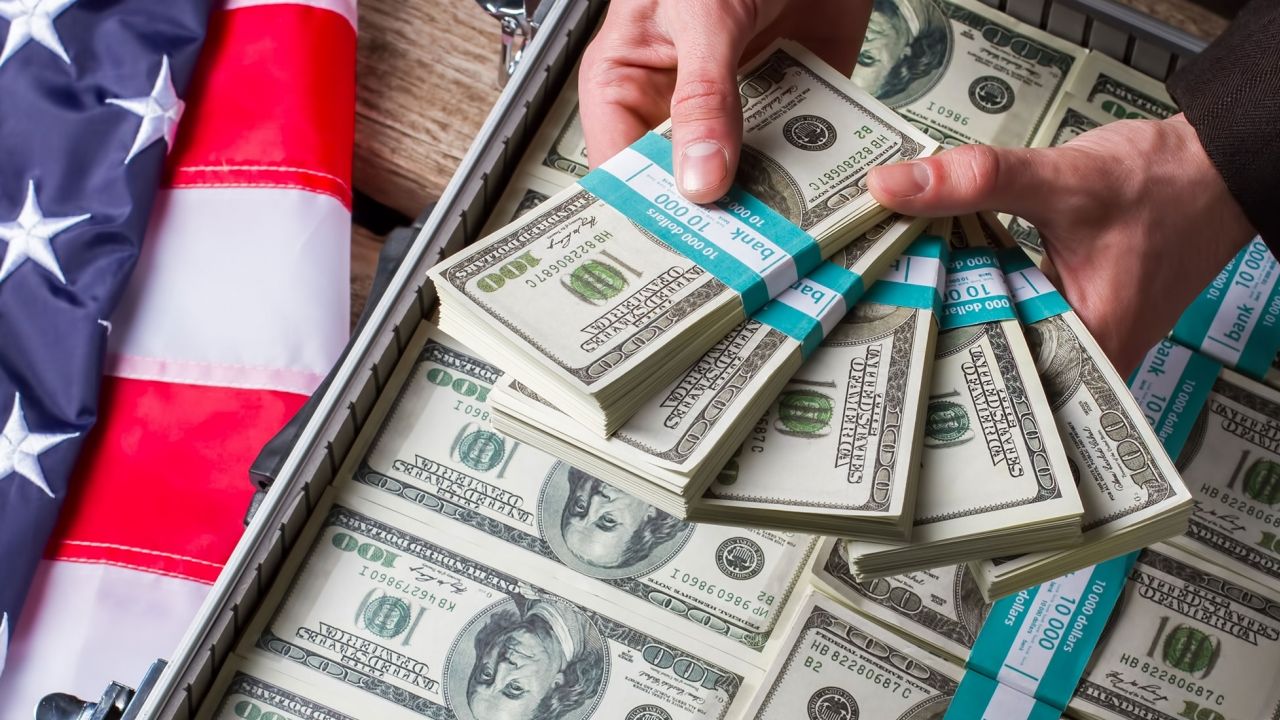 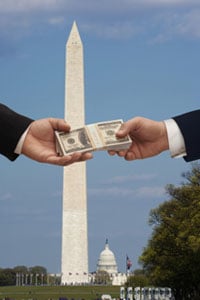 How times have changed! Eight years ago, the ethanol industry was keeping up the pretence that corn ethanol was a “bridge” to advanced biofuels. But figures like these, derived from the Renewable Fuels Association’s (RFA) own Annual Industry Outlook, tell a different story.

Subsidized corn growers and corn ethanol producers are reaping big profits, and meanwhile the corn ethanol “bridge” has become a “destination.” So you’ve got to wonder about the other claims the industry is making.

How Corn Ethanol Got Where It Is Today

First, the government subsidizes ethanol through a tax credit known as the Volumetric Ethanol Excise Tax Credit (VEETC). Designed to make the fuel more cost competitive, the tax credit pays refiners 45 cents a gallon to blend ethanol with gasoline. Oil and gas companies get this tax subsidy regardless of the price of ethanol or how large their profits are.

Second, Congress passed energy legislation in 2005 that created the Renewable Fuel Standard (RFS). Updated in 2007, the RFS listed a series of goals necessary to boost renewable fuels consumption by 36 billion gallons by 2022. The first goal requires 15 billion gallons of corn ethanol by 2015, which remains in effect until 2022. The second goal is to produce 21 billion gallons of “advanced biofuels” by 2022. It defines advanced biofuel as a “renewable fuel, other than ethanol derived from corn starch, that has lifecycle greenhouse gas emissions…that are at least 50 percent less than baseline lifecycle greenhouse gas emissions.”1 (i.e., emissions produced by burning regular gasoline.)

This chart shows how the RFS targets for biofuel use rise year-by-year through 2022. 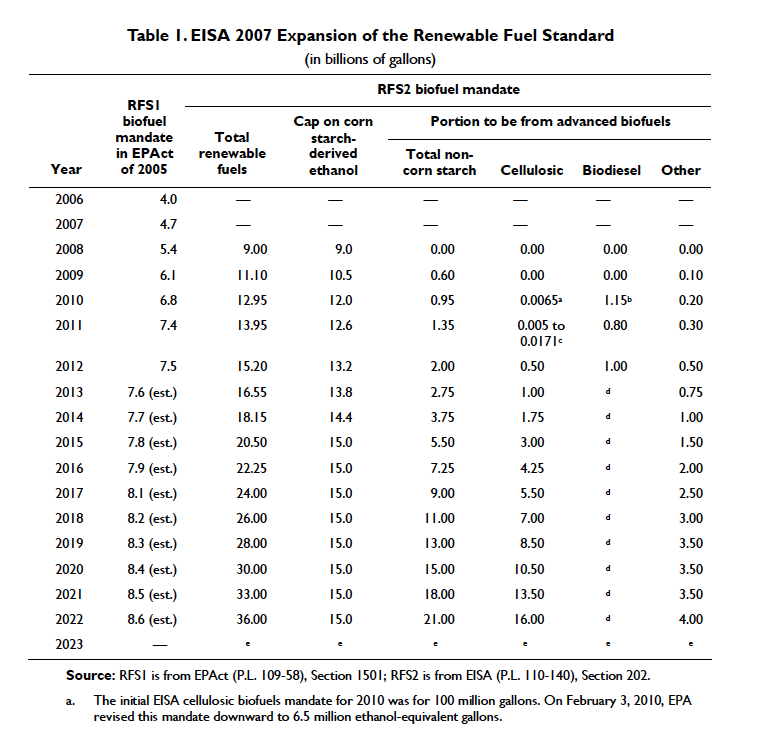 The supposed growth of biofuels that would come from something other than corn looks impressive, but getting across that ethanol “bridge” is like running head-on into a 70 mph wind. The biggest reason is the VEETC tax credit, which is set to expire at the end of this year unless the ethanol lobbies get their way and persuade the lame duck session of Congress to pass an extension of this wasteful and unwise tax subsidy.

The Renewable Fuels Association and the National Corn Growers Association (NCGA) argue that extending the tax credit is essential in order to make progress in reducing American dependence on imported oil and fossil fuels generally. But the reality is that this subsidy is not only draining government coffers but also drowning out other renewable energy options with far more promise.

Unfortunately, the Environmental Protection Agency (EPA) has already caved into pressure from the corn ethanol lobbies by announcing a whopping 90 percent reduction of the cellulosic ethanol requirement for 2010 (CRS, 2010). The ostensible justification is that cellulosic technology has been slow to emerge. But a big reason why cellulosic has been slow to bust out of the test tube stage and into the mainstream is that unlike corn, its feed stocks have not historically been indirectly subsidized by the government the way corn has. The fact is that a maze of direct, counter-cyclical, insurance and loan deficiency subsidies under the Farm Bill artificially reduce the price that ethanol manufacturers pay for each bushel of corn. It’s often overlooked that traditional farm subsidy programs pay corn growers $660 million every year, giving corn ethanol a huge leg up in the market.

When is a Ceiling a Floor, and Vice-Versa?

Earlier this year, John Urbanchuk, a consultant for the Renewable Fuels Association, said in his annual economic analysis on ethanol that:

“In the absence of the VEETC, the RFS is an absolute demand ceiling that…may not be attainable with domestically produced biofuels.”2

Just a year earlier, however, the president of the association, Bob Dinneen, was quoted saying that the Renewal Fuel Standard

“We can produce 8 billion gallons… And [the RFS is] a floor, not a ceiling.”4

The actual legislation and a recent report from the authoritative (and non-partisan) Congressional Research Service (CRS) report say clearly that “no more than 15 billion gallons can be ethanol from corn starch, and no less than 16 billion must be from cellulosic biofuels.”5 So, technically Mr. Urbanchuk was right calling it a ceiling, but with a caveat. Since his statement was prefaced with “in the absence of the VEETC,” he was effectively saying that the ethanol industry will not be able to grow beyond 15 billion gallons because corn ethanol is not economically viable on its own. The ethanol industry will never be satisfied solely with the RFS because cheaper and more environmentally friendly imports threaten the ability of domestic producers to meet the targets. As a result, ethanol groups beg for additional tax credits every time the VEETC is about to expire, even though they claim to support other biofuels and energy sources. As Dave Loos from the Illinois Corn Growers Association bragged, “In the world of corn-based ethanol, we’re always looking for a silver lining.”6

Even a Republican congressman from Nebraska who represents the second-highest ethanol producing state recognized the inconsistency of subsidizing mandated production. Rep. Jeff Fortenberry introduced H.R. 5757, the Renewable Fuels for America’s Future Act, which “effectively discontinues the credit paid to companies for blending mandated amounts of ethanol, saving an estimated $5.67 billion of taxpayer money [in 2011].”7

The industry’s flip-flopping does not end there. The Corn Growers’ 2010 Policy Position Paper called for “seeking an extension of the…VEETC, with the goal of making the credit permanent.”8 RFA’s Bob Dinneen, more modestly just wants Congress to “extend this tax incentive with, you know, a stroke of the pen, a little bit of Whiteout, just change the date” during the lame duck session.9 After it’s been extended, he says, we can have a debate about the future of biofuels.

A prudent person might want to be a bit sceptical about this approach. These groups both supported H.R. 4940, introduced last spring, which would have extended the tax credit until 2015.10 Problem #2:  Wouldn’t we all like simply to solve our problems, especially a $6 billion-a-year one (the cost of the ethanol tax credit), with “a stroke of the pen.” Life would be so simple.

Here’s the truth of it. Allowing the VEETC to expire this year would (1) eliminate the expensive subsidy taxpayers are throwing at corn ethanol in addition to its guaranteed market share under the RFS “carve-out;” (2) abolish “pen-stroke” requests from the ethanol lobby year after year; and, (3) not harm corn demand or corn producers’ income.11 And investors and the market would get a long-awaited signal that the United States is finally moving on to fiscally- and environmentally-sustainable energy alternatives.

Who Are the VEETC’s Real Winners?

Since the ethanol industry got off the ground, its lobbies have defended the tax credit and the RFS mandate by stressing the positive local economic benefits of ethanol production and plant ownership.12 It’s worth taking a hard look at those claims, too.

The direct beneficiaries of the VEETC are the gasoline blenders who receive the 45 cents per gallon tax credit. These include large corporations like BP, Shell and ExxonMobil. The Renewable Fuels Association made this clear in 2006 after passage of the 2005 energy bill:

“The focus now is on implementing a workable RFS that meets the needs of ethanol producers and gasoline refiners alike, and lays the groundwork for the continued rapid expansion of the U.S. renewable fuels industry.”13

Notice who didn’t get mentioned? Not a word about local farmers, rural communities or consumers? The Association leaves no doubt what its priorities are. 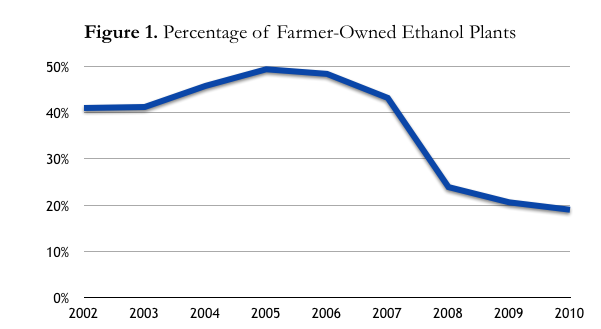 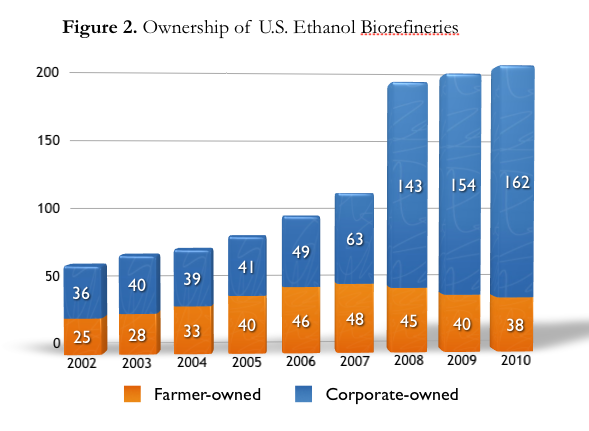 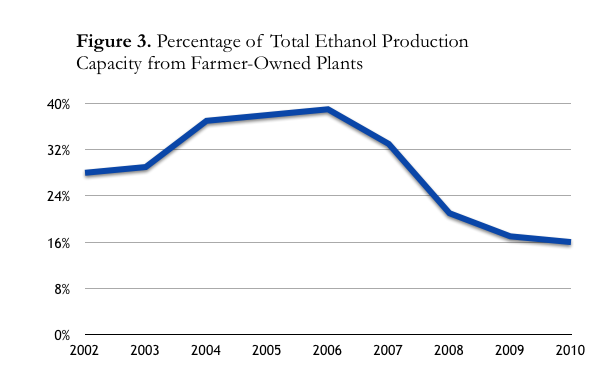 Not surprisingly, the decision-makers at the Renewable Fuels Association and other organizations that represent ethanol industry interests aren’t farmers, either; they are primarily employees of corporate-owned ethanol plants. Over the past eight years, never more than a quarter of the Association’s slate of four or five officers have represented farmer-owned plants, even though representatives of farmer-owned plants accounted up to 65 percent of the 50 members of the board. (That percentage dropped to 42 percent this year.) That’s yet another reason to be skeptical of the arguments that ethanol plants are largely owned by local farmers and their profits stay in local communities; and it’s yet another reminder that the ethanol lobby is actually controlled by corporate interests. 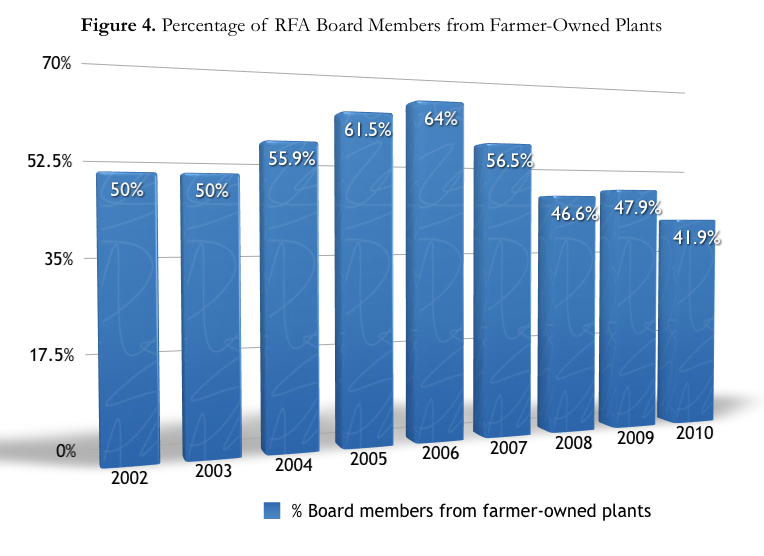 If reinstated, the VEETC will cost taxpayers $65 billion from 2011 to 2020.16  The money has to come from somewhere – either borrowing it and driving up the deficit, raising taxes or cutting other programs. To begin bringing down the $1.3 trillion national deficit, there’s no better place for Congress to start than by saying NO to the corn ethanol subsidy.

For years, the ethanol lobby has been touting the positive economic effect of corn ethanol on the economy, both locally and nationally. In 2007, the Renewable Fuels Association bragged that ethanol contributed $47.6 billion to Gross Domestic Product (GDP) – one of the best measures of the overall economy. USDA’s Economic Research Service (ERS), however, recently analyzed the tax credit’s effect and came to the opposite conclusion. If VEETC is renewed, it said, GDP would actually shrink by $5.8 billion by 2022, assuming oil prices hover around $80 per barrel.

By contrast, the researchers found that eliminating the tax credit would stimulate the economy by increasing real wages, consumption of goods and services, and, finally, GDP. In fact, GDP would grow by $4 billion (assuming $80 per barrel oil) by 2022. If the price of oil increases to $101 a barrel, GDP would grow by $6 billion in 2022.17 So much for industry’s claims that the tax credit is good for economic growth.

Yes, but What About Job Creation?

The ethanol industry’s job creation claims are also inflated. Independent analysts have found that its claims are 5-to-10 times too high, and that each job created costs taxpayers $139,000 to $450,000 a year. That’s a pretty inefficient way to create jobs.18

Allowing the tax credit to expire this year and resisting industry demands for taxpayer funding to build an ethanol infrastructure will allow the free market, not a politically powerful lobby, to determine what the clean energy future will look like.

As Bruce Babcock of Iowa State University and others have noted, showering one industry with billions of dollars in subsidies distorts markets by “redirecting venture capital and other investment dollars away from competing alternative energy sources.”192021

The United States has limitless opportunities to meet its energy needs with wind, solar and geothermal energy, electric- and hydrogen-powered vehicles, public transportation, conservation, and a slew of others. Anchoring the nation’s energy future to corn ethanol through expensive and market-distorting subsidies and policies makes no economic or environmental sense. The time has come for Congress, in its current lame duck session, to let this wasteful tax credit die a peaceful death.

2 Urbanchuk, John. “Importance of the VEETC to the U.S. Economy and the Ethanol Industry.” 18 March 2010. Accessed online 9 November 2010 at http://www.ethanol.org/pdf/contentmgmt/importance_of_veetc_to_the_us_economy_and_the_ethanol_industry.pdf.

14 This data is based off of RFA’s own Industry Outlook reports. Renewable Fuels Association. “Annual Industry Outlook.” 2010. Accessed online 9 November 2010 at http://www.ethanolrfa.org/pages/annual-industry-outlook.