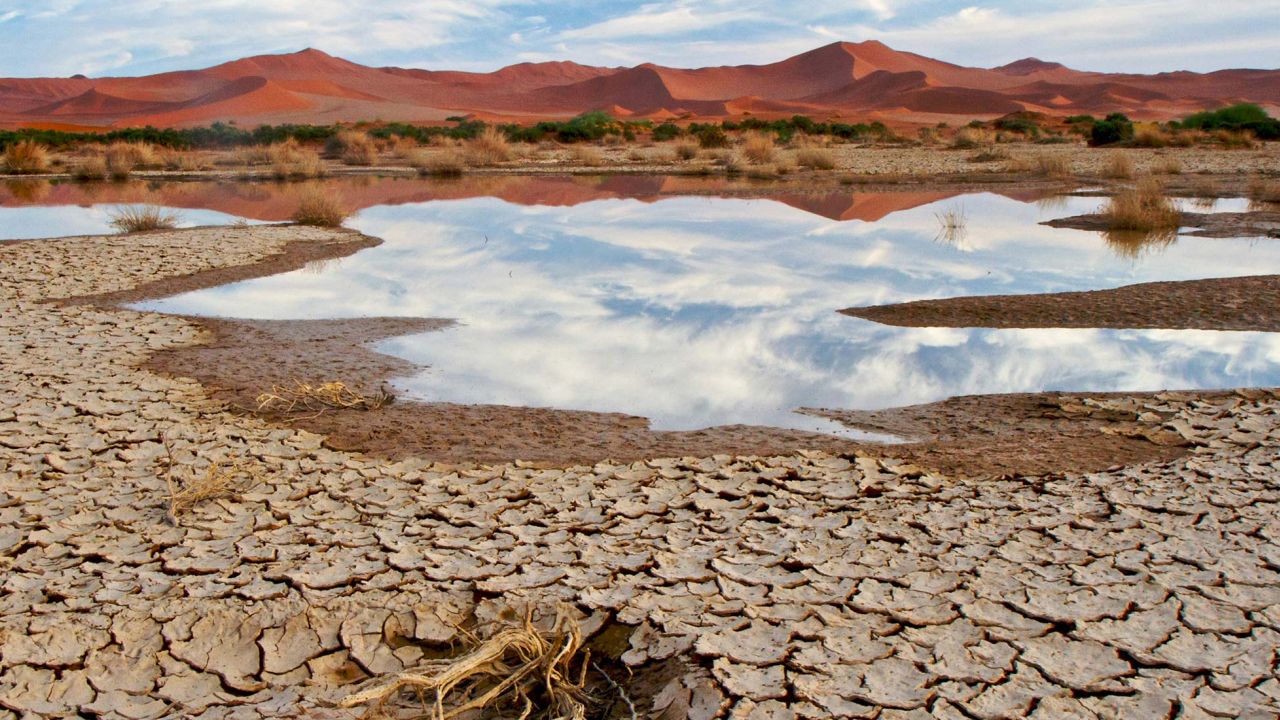 Thanks to five decades of bad policy decisions, a quirk of geology underlaying hundreds of thousands of acres of California's Central Valley has snowballed into a multi-million dollar taxpayer boondoggle that continues to pose an environmental threat to the fragile San Francisco/San Joaquin Bay-Delta estuary.

Much of the soil in the western San Joaquin Valley is loaded with selenium, a usually benign trace element that in high concentrations can be deadly to wildlife and humans. The selenium poses few problems -- until the land is irrigated for farming. Once that happens, selenium (and other salts) leach into groundwater and must be drained off the land to avoid poisoning the growing crops. But draining that polluted water into a stream or river causes further ecological problems.

The naturally high selenium content in the San Joaquin Valley has long presented serious barriers to farming. A 1990 report by the U.S. Department of Interior attributed the highly saline soil and poor drainage to the abandonment of farms more than a century earlier:

"Inadequate drainage and accumulating salts have been persistent problems in parts of the [San Joaquin] valley for more than a century, making some cultivated land unusable as far back as the 1880s and 1890s. Widespread acreages of grain, first planted on the western side of the valley in the 1870s and 1880s were irrigated with water from the San Joaquin and Kings rivers. Poor natural drainage conditions, coupled with rising ground-water levels and increasing soil salinity, meant that land had to be removed from production and some farms ultimately abandoned" (SJVDP 1990).

While water is scarce in the Central Valley, sunshine and good weather are abundant, making the area appear attractive for farming, despite the problems posed by selenium. In the 1940s and 1950s San Joaquin farmers hoping to expand farming operations lobbied the federal Bureau of Reclamation to extend the California Central Valley Project (CVP) – a massive taxpayer-funded water delivery system – to the region (Westlands 2010). 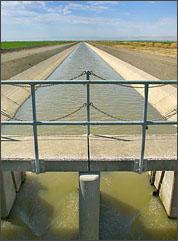 The farmers knew that long-term irrigation would be impossible without some kind of drainage system to funnel selenium-polluted water away from their fields. So when a group of San Joaquin farmers signed a contract with the federal government to create the new "Westlands Water District," they made sure that the contract contained a provision requiring the federal government to provide both irrigation water and drainage for those areas where selenium was a particular problem (Westlands 2010). Unfortunately, the Bureau of Reclamation didn't consider the potential environmental damages of draining off the polluted water when it agreed to provide irrigation water to Westlands.

Farmers receiving Central Valley Project water were supposed to repay taxpayers $1.1 billion against the project's $3.6 billion price tag. Under law, the farmers should have paid off this debt within 50 years after the CVP was completed (DOI 1997). The precise deadline remains a matter of debate but this much is certain. In 2008 (the most recent year for which data is available) — 65 years after the water began flowing — farmers benefitting from this project had paid back only 20 percent of their obligation under the law (USBR 2010a). According to Bureau of Reclamation documents, in 2008 Westlands still owed $367 million dollars to taxpayers, 82 percent of their debt (USBR 2010a).

In addition to being a financial mess, the Central Valley Project has caused a number of environmental problems. One of the worst was directly related to irrigating the high selenium soils in Westlands Water District. In order to provide drainage to thousands of acres of farmland, the Bureau of Reclamation constructed the San Luis Drain – a mostly unlined canal that funneled selenium-laced wastewater away from Westlands and into Kesterson National Wildlife Refuge in Merced County. There, the compound concentrated in the shallow waters and aquatic vegetation, poisoning birds and other wildlife (NRC 1989).

In 1982, scientists observed record numbers of migratory birds at Kesterson hatching with massive deformities. Baby birds had grossly misshapen beaks, twisted legs, missing wings and malformed skulls. More than 1,000 waterfowl died (NRC 1989). This discovery has come to be known as the Kesterson disaster.

Floyd Dominy, head of the Bureau of Reclamation from 1959 to 1969, acknowledged in 1997 that the decision to build a water delivery system to what would become Westlands Water District "a terrible mistake":

"We went ahead with the Westlands project before we solved the drainage problem. We thought we knew how to solve the drainage problem. We thought the Kesterson Reservoir could be flushed on out into the [San Francisco/San Joaquin Bay] Delta. We didn't have it solidified. So I made a terrible mistake by going ahead with Westlands at the time we did." (Else and Harrar, 1997)

Bureau of Reclamation officials closed the San Luis Drain in 1985, but they did not come up with a new way to drain selenium-fouled water. In 1998 Westlands sued the federal government for breach of contract and demanded a drainage system, as the contract specified. In 2000 a Federal Appeal Court ruled that although the government's duty to provide drainage was not excused, the government had discretion to satisfy its duty in alternate ways (see Firebaugh Canal Co. v. United States, Nos. 95-15300 & 95-16641, Feb. 4, 2000). In other words, the government could legally choose to buy out land owners and retire the land instead of providing drainage. The Bureau of Reclamation was tasked with determining the economic and environmental feasibility of various alternatives. Its conclusions were set in a 2007 document called the "Record of Decision" (USBR 2007).

As required by federal law, the agency conducted a National Economic Development account analysis that calculated the net economic gain or loss that would be generated by different solutions. Among the options it weighed:

-- Retire 140,894 acres of Westlands farmland plus 14,467 adjoining acres north of the District known as the Grasslands Drainage Area. Spend federal dollars to build drainage and treatment facilities for the remaining 113,000 selenium-impaired acres within Westlands and another 66,533 acres selenium impaired acres in Grasslands. Economic loss: $10.2 million a year.

Oddly, the agency proposed to move ahead with the money-losing option, involving construction of new drainage and treatment systems in Westlands and Grasslands. Because federal rules require that agencies select alternatives with the greatest net economic benefits, Bennett Raley, Assistant Secretary of Water and Science at the Interior department, under the George W. Bush Administration, was required to issue a special exemption (WRC 1983).

Fortunately, Congress and the Obama Administration summarily rejected the Bureau of Reclamation plan. While plans for a drainage system in Grasslands moved forward, agency officials went back to the drawing board and came up with a new proposal for Westlands. Bureau of Reclamation commissioner Michael Connor outlined the new plan in a September 1, 2010, letter to U.S. Senator Dianne Feinstein, D-Calif. (Connor 2010).

Unfortunately, the agency's latest plan is just as problematic as the previous one. Among other things, it would:

EWG found that between 2005 and 2009, the federal government issued a total of $22.4 million dollars in direct payment subsidy checks (subsidies that are based on historical production of commodity crops) and $31.6 million dollars in counter-cyclical payment subsidy checks (subsidies that fluctuate with the prices of agricultural commodities) to 356 individuals. The five-year total for both subsidy categories was $54 million, or an average of $10.8 million per year. [Click here to see a list of all subsidy recipients.]

EWG's calculations are conservative. While the National Economic Development analysis found in the Bureau of Reclamation's 2007 Record of Decision document listed 253,894 acres within Westlands in need of drainage (along with another 44,106 acres that had already been retired), when EWG analyzed the agency's maps contained in this same document, we found that the drainage impaired area shown comprised only 220,000 acres (USBR 2007). The reasons behind this discrepancy remain unclear, and the Bureau of Reclamation was unable to provide the underlaying geographical information system (GIS) data used to produce the maps to EWG. For these reasons, EWG was only able to calculate subsidy checks going to 220,000 acres of the 253,894 acres the agency has stated is in need of drainage.

In addition, EWG confined its analysis to the two most important types of subsidies (direct payments and counter cyclical subsidies) provide to Westlands. We did not consider the 13 other kinds of subsides categories that farmers benefitted from during the 2005-2009 period. These additional subsidies, which included disaster payments and dairy subsidies among others, accounted for another $2 million per year.

The Bureau of Reclamation's 2007 National Economic Development analysis ignored the issue of taxpayer-funded crop subsidies (USBR 2007). Yet it considered an incredibly wide range of other economic benefits and costs, such as:

It is simply inappropriate to exclude crop subsidies when considering the potential economic costs and benefits of various alternatives in Westlands. Subsidy payments are real cost outlays by the federal government, and are easy to calculate since they have hard numbers attached – unlike many of the projected changes in revenues associated with different action alternatives. Subsidy payments have also been ongoing for decades, and are unlikely to disappear anytime soon (EWG 2010).

When U.S. taxpayers' annual expenditure of $10.8 million in crop subsidies is taken into account, the cost of continuing to farm Westlands' 250,000 troubled acres becomes exorbitant. There is only one solution that makes sense for the great majority of Americans: retire the selenium-laced land from farming and transition it to other uses that would be less costly to taxpayer and the environment, and provide the nation more benefit. One option is to use the land for renewable energy production, something in which both Westlands and the Department of the Interior have expressed interest.

The selenium laced land simply cannot sustain farming at a reasonable cost to the taxpayers, and with adequate protection for California's invaluable, fragile wildlife habitat.

The time is nearing when federal agencies and Congress must finally settle on a long-term solution for Westlands' toxic lands. The stakes are high. Among them:

The true costs of farming on Westlands' toxic lands cannot be justified by any measure – economic or environmental. The time has come to fix the Bureau of Reclamation's costly mistake and retire all of the selenium tainted land in Westlands.

Imparied Drainage Area: Using land descriptions and maps from U.S. Bureau of Reclamation and from maps contained within the Bureau's May 2006 Final Environmental Impact Statement, purpose & need, alternatives, etc. EWG was able to define the area of the IDA. (http://www.usbr.gov/mp/nepa/nepa_projdetails.cfm?Project_ID=61)

Farm Boundaries: EWG was able to get USDA farm numbers in the IDA using data received from USDA under the Freedom of Information Act. These USDA farm numbers come from the Common Land Unit (CLU) file which is a GIS layer that shows the geographical location of all of the farm tracts that are enrolled in any USDA programs. All USDA farms with any tracts in the IDA were extracted from these files. Each USDA farm is composed of one or more tracts.

The CLU data has since been protected from release under FOIA in the 2008 Farm Bill, although the file was put together at taxpayer expense. http://www.fsa.usda.gov/FSA/apfoapp?area=home&subject=prod&topic=clu

Subsidy Information: A list of farm numbers within the IDA were then cross referenced with payment data also received from USDA under FOIA to calculate the amount of subsidies to the IDA. CCPs and DPs are tied to farm numbers in the payment data, the remainder of the programs were allocated to the IDA based on the percentage of DPs to the IDA. For example if a subsidy recipient received money for direct payments both inside and outside the IDA and the percentage of DPs inside the IDA were 25% of their total direct payments, then we allocated 25% of any other programs (excluding counter-cyclical programs) to the IDA. Most USDA farms receiving subsidies are wholly contained within the IDA.

U.S. Department of Interior (DOI). 1997. The Impact of Federal Programs on Wetlands - Vol. II. Office of Environmental Policy and Compliance. Available at: http://www.doi.gov/oepc/wetlands2/v2ch11.html