Tap Water for 500,000 Minnesotans Contaminated With Elevated Levels of Nitrate

Drinking water for an estimated half a million Minnesotans is drawn from groundwater contaminated with elevated levels of nitrate, a toxic pollutant that is linked to cancer and is especially dangerous for infants, according to an EWG analysis of federal and state test data.

About one in eight Minnesotans served by groundwater-based public water systems consume tap water that, in tests performed over the past 10 years, had at least one detection of nitrate at or above the level the state considers a marker of potentially worsening contamination. Tens of thousands more Minnesotans are drinking from private household wells with elevated nitrate.

To its credit, Minnesota is implementing a Groundwater Protection Rule to reduce nitrate in drinking water. The rule – three years in the making and administered by the Minnesota Department of Agriculture – is a welcome first step that must be implemented quickly and robustly. But EWG’s analysis shows that even full implementation of the new rule may be too little, too late to protect Minnesotans – especially those drinking water from private household wells – from unsafe levels of nitrate.

Under the federal Clean Water Act, the legal limit for nitrate in drinking water is 10 milligrams per liter, or mg/L.1 This limit was set, in 1962, to guard against so-called blue baby syndrome, a potentially fatal condition that starves infants of oxygen if they ingest too much nitrate.

But newer research indicates that drinking water with 5 mg/L or even lower is associated with higher risks of colorectal cancer and adverse birth outcomes, such as neural tube birth defects. And the Minnesota Department of Health says a level of 3 mg/L indicates that “human-made sources of nitrate have contaminated the water and the level could increase over time.”

In June, EWG researchers released a peer-reviewed study that found nitrate pollution of U.S. drinking water at levels far below the legal limit may cause up to 12,594 cases of cancer a year. The article reviewed epidemiological studies of the health effects of nitrate-contaminated drinking water. Recent large-scale studies in Spain and Italy and in Denmark found statistically significant increases in colorectal cancer risk associated with nitrate in drinking water at levels of 0.7 to 2 mg/L.

In 2017, the Environmental Protection Agency began the work needed to review and revise the current legal limit for nitrate. But in April 2019, the agency announced it would no longer consider that re-evaluation a high priority. Drinking water with nitrate levels at or below 10 mg/L meets federal standards, but it is clear that protecting public health requires keeping the contamination level far below the legal limit.

Data from the U.S. Environmental Protection Agency show that 472,983 Minnesotans – more than the population of Minneapolis – are served by a total of 727 public water systems that were contaminated with at least 3 mg/L of nitrate. Almost 300,000 people drink from public systems contaminated at or above 5 mg/L, and more than 150,000 from public systems with at least 10 mg/L.

Tests by the Minnesota Department of Health and Department of Agriculture in the past 10 years show that 7,657 Minnesota households drink from private wells with at least one test at or above 3 mg/L of nitrate. Even if those wells serve just three people each, it means almost 23,000 more Minnesotans are drinking water contaminated with nitrate at or above that level. 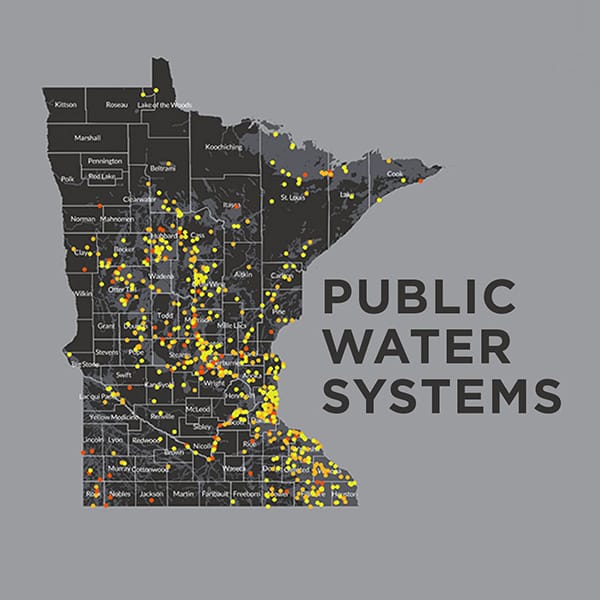 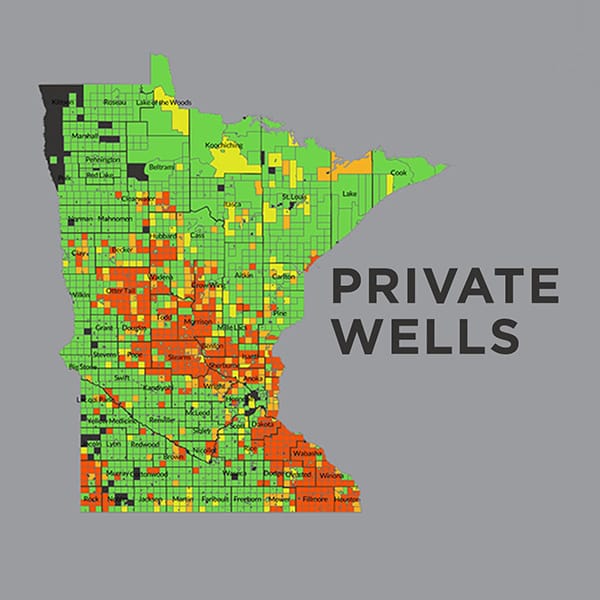 The Minnesota Fertilizer Nitrogen Management Plan, released in 2015 and updated this year, found that the millions of pounds of fertilizers and manure applied to cropland each year are the leading sources of nitrate that can pollute drinking water. More importantly, the report found that without careful management, much of the nitrate remains after crops are harvested and can seep into drinking water.

EWG’s maps confirm that nitrate contamination is far worse in regions of Minnesota where the types of soil and geology make it easier for nitrate in fertilizer and manure to get into groundwater. The area of highest vulnerability makes up almost one-fourth of the state and is home to 2.5 million acres of cropland and 6,287 livestock feedlots.

Almost 90 percent of public water systems with nitrate levels at or above 3 mg/L draw on groundwater in or very near areas considered highly vulnerable to nitrate contamination. About the same percentage of private household wells also draws on groundwater in these highly vulnerable areas. If you live in one of these areas, you are very likely drinking nitrate-contaminated water.

Groundwater Protection Rule May Be Too Little, Too Late

Minnesota’s Groundwater Protection Rule was finalized in June 2019 and will be implemented starting in 2020. The rule is a welcome first step, but it is likely to fall short. Here’s why:

Reliance on treating drinking water so that it has safe levels of nitrate is an expensive and often ineffective way to protect people. It is more effective to prevent nitrate contamination of drinking water in the first place. What is needed is an aggressive policy and programmatic approach that strategically combines voluntary and mandatory approaches to cleaning up Minnesota’s sources of drinking water.

To see more results of this study, click here.

Special thanks to Soren Rundquist, Director of Geospatial Analysis, and Craig Cox, Senior VP, Agriculture and Resources, for their help in completing this report. This report was produced with the generous support of the McKnight Foundation, the Walton Family Foundation and the Pisces Foundation.