Real MPG - Putting the Truth in Your Tank

The U.S. would have imported about 20 percent less foreign oil in 2005 if automakers met federal fuel efficiency or miles per gallon (MPG) standards based on real world driving conditions. That reduction is equivalent to more than 1.3 times the amount of oil imported from Saudi Arabia in 2005, or about two million barrels of oil per day. For consumers this translates into 33 billion gallons of gasoline saved that year.

Instead, over the past 20 years, car company lobbyists and their friends in Congress have dramatically increased US dependence on foreign oil by prohibiting the EPA from requiring MPG tests that reflect how people actually drive.

In the car company test for compliance with corporate MPG requirements, cars never exceed 60 miles per hour, never have the air conditioning on, never go up hills, never accelerate rapidly and always drive in perfect weather. According to several EPA analyses, these test results exaggerate real world MPG by about 25 percent for city driving and 30 percent on the highway. 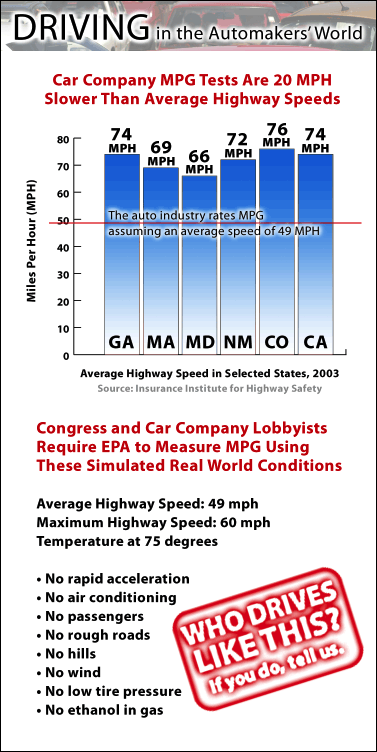 Bogus mileage tests are the cornerstone of car company compliance with government MPG standards. Since 1985, car companies have generally been required to meet fleet MPG averages of 27.5 for cars, and between 19.5-22.2 for trucks [†1]. Real world MPG is far lower, at about 21.7 for cars and 16.3 for trucks.

Congress publicly identified this problem in 1980. If car company lobbyists, at that time, had not blocked congressional action to base federal fuel efficiency standards on real world driving conditions the U.S. would currently be saving 710 million barrels of oil per year, or about 20 percent of all the United States' imports in 2005.

That is the equivalent of more than 1.3 times the 525 million barrels that the United States imported from Saudi Arabia last year.

Significant oil savings do not require an increase in MPG standards. Congress could achieve vast savings simply by requiring automakers to stop deceiving the public and instead subject their vehicles to real fuel efficiency tests rather than the inaccurate, outdated tests currently prescribed by law.

Energy
A Quarter Century of Deceit ›

Real MPG - Putting the Truth in Your Tank