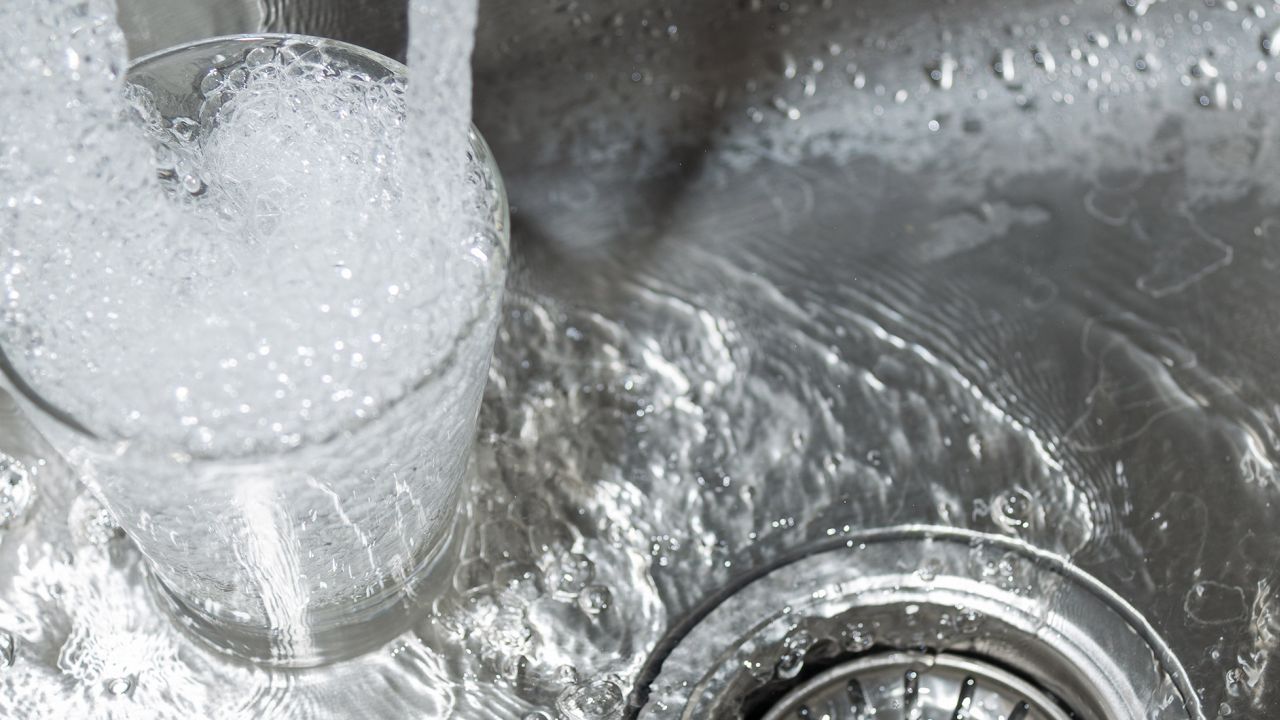 The known extent of the contamination of U.S. communities with PFCs – highly fluorinated toxic chemicals, also known as PFASs,[*] that have been linked to cancer, thyroid disease, weakened immunity and other health problems  – continues to expand with no end in sight. New research from EWG and Northeastern University in Boston details PFC pollution in tap water supplies for 15 million Americans in 27 states and from more than four dozen industrial and military sources from Maine to California. On the map, blue circles show public water systems where PFCs were detected in public drinking water systems – the larger the circle, the more people served by the system. Clicking on a circle brings up detailed information, including contamination levels. Red dots indicate a contamination site in Northeastern’s PFAS Contamination Site Tracker. Clicking on a dot brings up detailed information and links to more information and resources from the Institute.

The map, which will be updated as more contamination is discovered, is the most comprehensive resource available to track PFC pollution in the U.S. Its release coincides with a major PFAS conference June 14 and 15 at Northeastern which will bring together scientists, regulators, activists and others to examine a class of pollutants that contaminate water, soil, and the bodies of animals and people worldwide but were little known until recently.

The map focuses on the most well-studied fluorinated compounds – perfluorooctanoic acid or PFOA, formerly used to make DuPont's Teflon, and perfluorooctanesulfonic acid, or PFOS, formerly an ingredient in 3M's Scotchgard. Because of their nonstick, waterproof and grease-repellent properties, these and closely related chemicals were used in hundreds of consumer products and industrial applications, including cookware, outdoor clothing, food packaging and firefighting foam. The Centers for Disease and Control and Prevention have found PFOA or PFOS in the bodies of virtually all Americans,[1] and these chemicals can be passed through the umbilical cord from mother to fetus in the womb.

PFOA and PFOS are known as “long-chain” PFCs because they are built around eight or more carbon atoms. They were phased out in the U.S. after revelations that for decades DuPont and 3M covered up evidence of their health hazards, buildup in people's bodies and persistence in the environment. But today, PFOA production continues outside the U.S., with China now the biggest producer.[2]

In a classic case of regrettable substitution, U.S. chemical manufacturers have replaced the phased-out chemicals with reformulated “short-chain” PFCs with six or fewer carbon atoms. Manufacturers claim the new chemicals are less likely to build up in our bodies, but they were not adequately tested for safety before going on the market, and the limited research available suggests they may have similar health hazards. More than 3,000 PFCs have been or now are used worldwide.[3]

Despite widespread contamination and mounting evidence of health hazards, there are no federal regulations for PFOA and PFOS in drinking water. After persistent pressure from contaminated communities and elected officials, last year the Environmental Protection Agency dramatically lowered its nonbinding health advisory level to 70 parts per trillion for either chemical or the two combined.[4] (A part per trillion, or ppt, is about one drop of water in 1,000 Olympic-size swimming pools.)

But there is evidence that a safe level of exposure is much lower.

After reviews by state scientists in Minnesota, New Jersey and Vermont, these same states have set or proposed health-based limits for PFOA or PFOS between 14 ppt and 35 ppt. In a 2015 study by the National Toxicology Program and the University of North Carolina, researchers were unable to find a level of these chemicals so low that it did not harm mouse fetuses during critical windows of development.[5] From that and other studies, in 2015 Phillipe Grandjean of the Harvard T.H. Chan School of Health and Richard Clapp of the University of Massachusetts-Lowell calculated that an approximate safe level for PFOA and PFOS in drinking water was 1 ppt.[6] EWG endorses that level.

Under the EPA’s Unmonitored Contaminant Monitoring Rule, or UCMR, from 2013 to 2016 all U.S. public water systems serving 10,000 or more customers tested their supplies for PFOA, PFOS, and four other PFCs.[†] EWG’s analysis of the results shows that the tests found PFOA and/or PFOS in 162 systems serving 15.1 million Americans. Because the EPA only required reporting of detections at or above 20 ppt for PFOA and 40 ppt for PFOS, all of those water supplies had detections exceeding Grandjean and Clapp’s safe level of 1 ppt.​

Several large metro areas had detections in only a small number of samples. It is not known exactly how many people were served the contaminated water, and since testing began four years ago, some systems may no longer be contaminated and new areas of contamination may have emerged. Some systems filter their water to remove or reduce PFOA and/or PFOS, but those treatment methods do not effectively remove short-chain PFCs.[7]

There is no ongoing national-level testing of PFCs in drinking water, and the EPA has said it could be 2019 or later before it decides whether to set a national drinking water standard for PFOA and PFOS. In the meantime, several members of Congress have introduced bills that would require federal standards for PFCs or further study on their health effects:

But the extent of contamination is likely much greater than the UCMR results indicate.

The EPA testing program covered only a small percentage of water systems with fewer than 10,000 customers and did not cover private wells, which together provide drinking water for about a third of Americans. The example of New Jersey shows how UCMR data underestimates PFC contamination: In 2006, New Jersey did its own statewide water testing, using methods approximately 10 times more sensitive than the EPA’s.[8] EWG calculated that the less sensitive EPA tests and higher reporting threshold would have missed almost three-fourths of the PFC water contamination the state found in New Jersey.

Industrial, military and other contamination

PFC contamination of drinking water first came to national attention in 2001, when attorney Robert A. Bilott filed a class-action suit on behalf of 50,000 people whose drinking water was polluted by PFOA from  DuPont’s Teflon plant in Parkersburg, W. Va. In November 2005, the company agreed to a settlement valued at more than $300 million, and shortly thereafter the EPA fined DuPont a record $16.5 million for the pollution and cover-up.[9]

The issue largely faded from the headlines until 2015, when drinking water tests commissioned by a private citizen in the village of Hoosick Falls, N.Y. - http://www.timesunion.com/tuplus-local/article/Top-Stories-2016-PFOA-water-pollution-in-Hoosick-10825849.php, found levels of PFOA exceeding the EPA’s health advisory. The likely source of the contamination was a manufacturing plant operated by Saint-Gobain Corporation. A string of towns in New York, Vermont and New Hampshire with similar factories tested their own water and also found contamination. At about the same time, PFOS from firefighting foam was discovered in the water near hundreds of military bases, airports and fire department training sites.

Since then, the number of known sites of industrial or military contamination have mounted at a pace with which it is difficult for citizens, activists and journalists to keep up. Now this gap is being filled by the Social Science Environmental Health Research Institute at Northeastern University.

In 2015, the Social Science Environmental Health Institute received a grant from the National Science Foundation for a project called Perfluorinated Chemicals: The Social Discovery of a Class of Emerging Contaminants. The research team from Northeastern University and Whitman College is studying how PFC contamination went largely undetected for so long, and what led to the surge of awareness by citizens, advocates, state and local officials, and the news media. The researchers are collaborating with Toxics Action Center, Silent Spring Institute and the Green Science Policy Institute to track state, industry and community responses to the problem.

The Institute's director, Phil Brown, co-authored a 2016 paper examining the reactions of people in West Virginia and Ohio who learned they had been exposed to PFOA from DuPont's Teflon plant. Last year the research team – lead author Alissa Cordner, Lauren Richter and Brown – published a paper on how the Food and Drug Administration’s ban on long-chain PFCs in food packaging could signal a shift toward regulating chemicals as a class rather than one at a time. That flawed regulatory approach allowed the substitution of untested short-chain PFCs after the phaseout of PFOA and PFOS. Six other papers are in progress, but in the meantime the team has developed the PFAS Contamination Site Tracker.

New Jersey has the most known contamination sites with six, followed by Alabama and New Hampshire with five each and New York with four. At many of the sites, contamination levels are extremely high. The highest level recorded is at Joint Base McGuire-Dix-Lakehurst, a combined Air Force, Army and Navy base near Trenton, N.J. Groundwater at the base was found to have 580,000 ppt of PFOS. At Dover Air Force Base near Dover, Del., groundwater was found to have 270,000 ppt of PFOS.

[*] PFCs stands for perfluorinated chemicals, as the compounds were historically known. Many researchers and regulators now use the term PFASs, for per- and polyfluoralkyl substances.