Between 2008 and 2011, conversion of grasslands and wetlands to grow corn emitted millions of tons of greenhouse gases, and the Renewable Fuels Standard continues to spur production of corn ethanol rather than advanced biofuels. Although the RFS explicitly prohibits using converted land to produce ethanol, there is no regulatory framework to enforce this and the USDA has no way of knowing whether corn is being grown on converted land.

Overall, the proportion of the U.S. corn crop that goes to make ethanol soared from about 6 percent in 2000 to about 40 percent in 2013. Because the United States is the world’s top corn producer, this radical shift roiled global markets not just for corn but for other agricultural commodities as well.

Increased competition for the corn crop that used to be grown mainly for human food and animal feed has put upward pressure on corn prices. National Research Council studies suggests that the ethanol mandate raised commodity prices by 20-to-40 percent from 2007 to 2009.4 Farmers have responded to higher prices and increased demand by increasing production and seeking more land to plant, resulting in millions of acres of land-use change. In 2013, EWG documented that 23 million acres of grassland, shrub land and wetland had been plowed under for crop production between 2008 and 2011. Eight million acres were converted to grow corn and another 5.6 million to plant soybeans, because the ethanol mandate pushed up soybean prices as well.

Numerous studies have now shown that plowing up grasslands and cutting down rainforests to plant more commodity crops dramatically increases carbon emissions, releasing the carbon locked up in the trees and soil into to the atmosphere.5 The extent of the emissions depends on the type of land being converted (Table 1). Wetlands store the most carbon, followed by forests and grasslands. 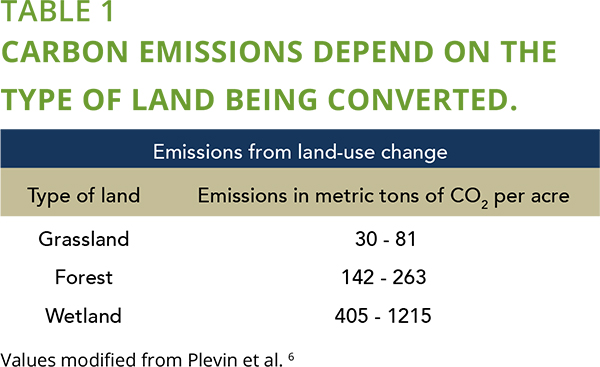