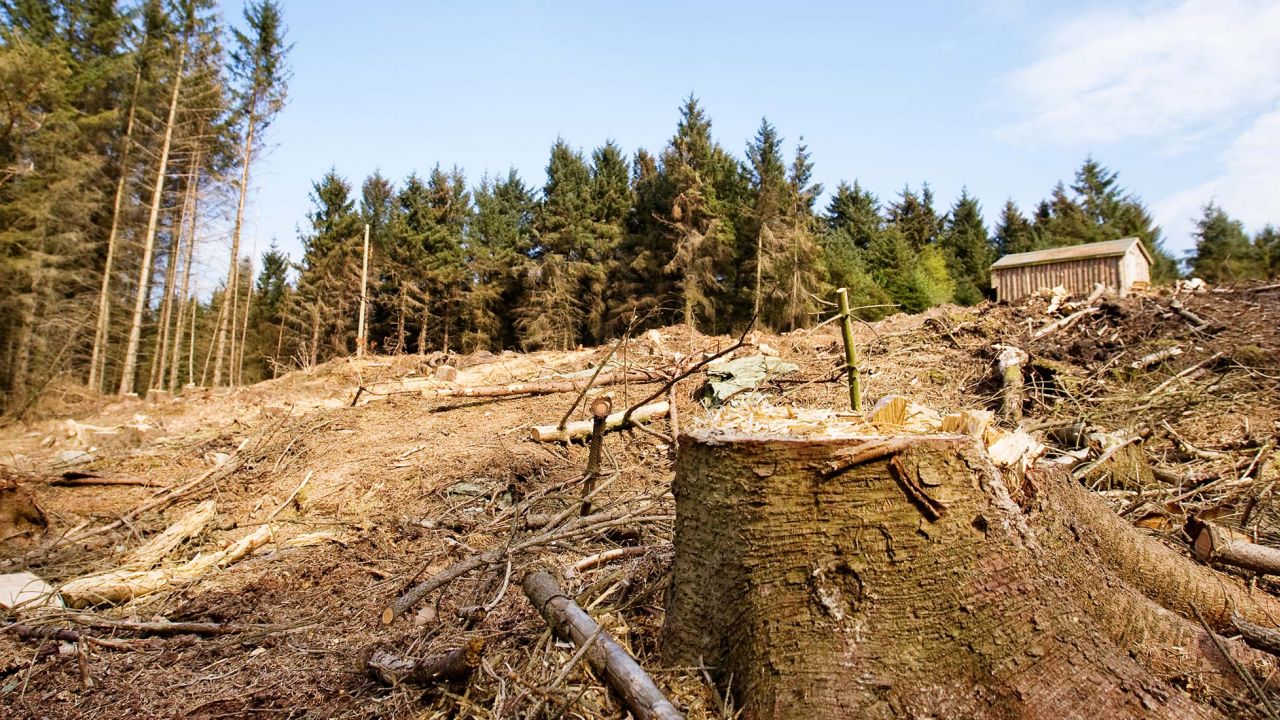 Almost no one would support massive clear-cutting of America’s forests as a way to slow global warming and promote renewable energy. Yet that is precisely what is destined to happen under the incentives created by current and proposed policies, at both the state and federal level.

The reason for this outcome, which would sharply increase greenhouse gas emissions while wiping out vast numbers of trees that today help draw carbon dioxide out of the atmosphere, is a fundamental flaw in current carbon accounting practices. This Enron-style accounting makes a glaringly false assumption, that burning trees and other biomass fuels produces zero net carbon emissions.

This false premise was identified in 2009 but remains deeply embedded in both pending climate change bills in Congress and in the “renewables portfolio standards” being promulgated by state and federal agencies.

How bad would it be?

EWG calculates that the current goal of generating 25 percent of U.S. electricity from renewable sources by 2025 would require the equivalent of clear-cutting between 18 million and 30 million acres of forest. Sufficient amounts of other biomass fuels simply don’t exist in usable form. That amounts to leveling more than 46,000 square miles of forest – an area larger than the entire state of Pennsylvania.

By 2030, as utilities become more dependent on biomass to meet their renewable fuels targets, the devastation could encompass 50 million acres of forest.

House and Senate climate legislation, as well as federal and state policies designed to promote the use of biomass fuels for electricity generation, will sharply increase cutting of U.S. forests by the year 2025 while pouring huge amounts of carbon into the atmosphere, an extensive analysis by Environmental Working Group (EWG) shows.

Reaching these goals – generating 25 percent of US electricity from renewable sources by 2025 – will require the equivalent of clear-cutting between 18 and 30 million acres of forests over the next 15 years; 30 million acres is 46,291 square miles, an area larger than the entire state of Pennsylvania. By 2030, the equivalent of up to 50 million acres could be clear-cut as utilities become dependent on biomass to meet their renewables targets. Less intensive harvesting merely means that more acres that will be cut.

This perverse outcome of pending climate and energy bills and existing state and federal renewable energy incentives results from a glaring flaw in carbon accounting practices, which falsely assumes that burning biomass fuels, including trees, produces zero net carbon emissions. Close examination shows that the reverse is true: logging and burning trees will produce a near-term surge in carbon releases – greater than from burning coal – while eroding for decades the forests’ ability to recapture those emissions.

This Enron-style accounting system, embedded in virtually all climate policies worldwide, hides massive carbon emissions that will result from burning biomass to generate electricity. EWG’s analysis of government projections predicts that over the next 15 years about 4.7 billion tons of carbon will be generated from burning biomass, most of it from whole trees and all of it “off the books.” This massive pulse of uncounted carbon dioxide will effectively erase 80% of the reduction in CO2 emissions from the power sector that is at the heart of federal climate legislation.

Adding insult to injury, this destruction and pollution will be heavily subsidized by U.S. taxpayers. The Congressional Budget Office estimates that under the American Clean Energy and Security Act (ACESA), the treasury would forfeit about $10.5 billion in tax revenues over the next 15 years as we subsidize the construction of biomass-burning power plants, most of them burning whole trees. Because biomass emissions are not counted, facilities generating power from biomass would avoid purchasing carbon allowances worth a staggering $129 billion by 2025 under the carbon cap.

EWG’s analysis examined two scenarios using data and projections from the Energy Information Administration (EIA) of the U.S. Department of Energy. We analyzed the impact on forests of EIA’s basic scenario, which projects the impact of the House-passed climate bill (ACESA) if enacted as written, and second ACESA scenario that achieves maximum carbon reductions. Our analysis indicates that meeting the demand for biomass fuel under EIA’s basic ACESA scenario would require the equivalent of cutting between 18 and 30 million acres by 2025, and up to 50 million acres by 2030. The fuel requirement for the even faster ramp-up of biomass power envisioned under the optimal scenario would require the equivalent of cutting up to 59 million acres by 2025. Legislation proposed in the Senate would produce essentially the same results.

Over the past decade, many states have adopted renewables portfolio standards (RPS)1 under which a certain proportion of power must be produced from renewable sources. One potentially disastrous outcome of these policies, even prior to enactment of a federal RPS, has been an explosion of proposals to construct wood-burning power plants and to burn wood at coal-fired plants (co-firing). Some existing coal plants are proposing to switch to burning wood entirely, which under current policy would allow them to declare that their carbon dioxide emissions have gone to zero, when in reality they would have increased substantially.

At least 118 new biomass power plant and co-firing proposals that would use wood as fuel are currently in various stages of permitting or approval in at least 30 states, with capacity increasing at an exponential rate.

“Hardly a day passes in the Southern U.S. without an announcement of a new bioenergy facility or expansion of an existing one… What is increasingly obvious is that the amount of truly available logging residues will be nowhere near enough to supply the current and announced bioenergy processors in the Southern U.S…“
Biomass Magazine
August 2009

A typical 50-megawatt biomass plant burns more than a ton of wood a minute. Two wood-burning plants recently proposed in Massachusetts would generate a combined 97 MW and require the equivalent of cutting 12,000 acres of forest annually, more wood than is currently harvested in the entire state each year, while providing just 0.7 percent of the power generated in the state. Permitting documents reveal that whole-tree harvesting would provide one-half to two-thirds of the fuel for at least one of the plants.

In response to objections by citizens and environmental groups, Massachusetts recently suspended the eligibility of biomass for the state’s renewables portfolio standard pending a complete review. In Ohio, multiple proposals to co-fire biomass in coal plants have been proposed. Plant operators admit that whole trees, specifically white, interior trunk wood, are the only biomass fuel that will meet emissions requirements. The 1,125 megawatt Beckjord plant in Ohio has proposed to replace up to 100 percent of its coal consumption with biomass. Where will this fuel come from?

“The most likely initial fuel will be woody biomass produced by whole tree chipping” from a 50-mile radius of a coal loading terminal on the Big Sandy River. Beckjord application to the
Ohio Public Utilities Commission - 2009

Many co-firing proposals rely on processed wood pellets for biomass fuel, which require massive energy and wood inputs to produce.

The assumption that burning biomass, including trees, produces zero carbon emissions is the cornerstone of current state-level renewables electricity standards, pending energy legislation in the US Senate and the House-passed climate bill. The erroneous classification of biomass power as carbon neutral has allowed biomass power to emerge as a significant potential source of “renewable” power, even as the overwhelming experience to date indicates that the primary source of biomass will be whole trees.

Without the biomass accounting loophole, many of the carbon reduction goals in federal climate and energy legislation are simply not attainable. Given the massive ramp-up in biomass power that is already occurring, and that 2025 emissions reductions targets must be met in only 15 years, it is urgent to correct this carbon accounting flaw.

Federal and state carbon tracking systems do not accurately account for carbon emitted by biomass power or place any restrictions on burning whole trees. The rush is on to capitalize on this lucrative loophole, with drastic consequences for forests.

Forests are a major force pulling carbon out of the atmosphere. The annual aboveground growth alone in US forests counteracts about 14 percent of all emissions from power generation each year. Cutting them down to burn in power plants will not only inject massive amounts of stored carbon into the atmosphere, it will also destroy our best defense against the buildup of atmospheric carbon.

To avert this potentially devastating outcome, carbon accounting needs to be reformed, and renewable fuels and greenhouse gas reduction policies need to be aligned accordingly. Specifically:

Congress must enact strong climate legislation that eliminates the biomass carbon accounting loophole. Carbon accounting practices must be corrected to include the full and immediate impact of cutting down forests to burn in biomass power plants. Biomass burning must not be permitted unless each specific proposal can unequivocally demonstrate that it will not increase greenhouse gas emissions, even in the short term. These reforms must be incorporated into all federal and state energy and climate policies.

Biomass plants should be added to the list of “covered entities” required to purchase carbon emission allowances under federal and regional cap-and-trade programs. To the extent that biomass emissions are demonstrably re-sequestered in a short period of time, exceptions could be made.

Only high efficiency, small-scale, combined heat-and-power plants that extract maximum energy value from “additional” biomass should be considered to sell Renewable Energy Credits, and such projects should also undergo rigorous lifecycle analysis to determine their carbon footprints. “Additional” biomass should be defined as sustainably generated biomass containing carbon that would not otherwise remain stored, or become stored, or be meaningfully used for purposes other than energy production.