A recent study from the Centers for Disease Control tested a demographically diverse group of almost 400 Americans for evidence of exposure to BPA and found that 95% of study participants had the chemical in their urine (Calafat et al. 2005). BPA has been linked to a variety of health outcomes which are increasing in the United States and responsible for a major toll on our collective health. These include breast and prostate cancer, and infertility (Maffini 2006).

An analysis of CDC's body burden measurements shows that women are routinely exposed within a margin of 10 to doses that caused toxic effects in laboratory studies. The government typically mandates a 1,000- to 3,000-fold margin of safety between human exposures and levels found to harm lab animals. In the case of BPA, however, women routinely exceed this safety margin for 7 of the toxic doses from studies the CERHR has classified as appropriate for assessing human risks (see CERHR 2006 and Section 3 of this report). An analysis of CDC's data on women's exposures to BPA shows: 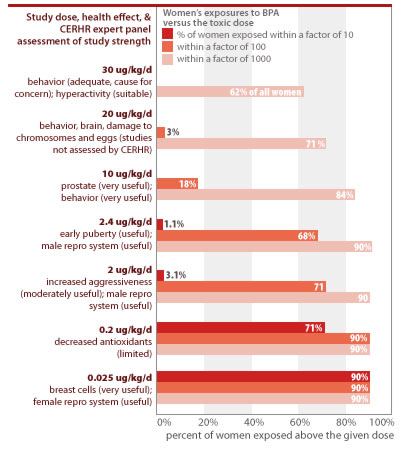 Source: EWG analysis of CDC measurements of BPA in urine from Calafat et al. (2005). Estimates assume 2 liters of urine excreted per day; and rely on linear interpolation between the percentiles of data provided in the study documentation, and linear extrapolation above the 95th percentile, using a best-fit estimation from the intercept at the 100th percentile of exposure.


Populations with unusual exposures are at special risk

Body burden studies indicate a fraction of the population is highly exposed to BPA. The most highly exposed people in the adult monitoring study excreted 6 times more BPA than the average participant (Calafat 2005). A study of 7-year-old girls from 5 US cities found similar, if not slightly higher, exposures for children compared to adults (Wolff et al. 2006). Only summary results are available from the Wolff study, but they indicate an average exposure of 0.06 ug/kg-day, (CERHR 2006) and a maximum of 54.3 ug/L, 27 times higher than the median concentration.

Since both studies collected samples at a single point in time it is difficult to know how much an individual's exposure varies from day to day. A few studies have collected 24-hour urine measurements over several days and found a high degree of variation in day-to-day exposure for individuals (Arakawa 2004).

In laboratory animals BPA is rapidly passed to the developing fetus, and detected at higher concentrations in fetal than maternal blood (Schonfelder, Flick et al. 2002; Schonfelder, Wittfoht et al. 2002). Concern about daily pre- and post-natal exposures is heightened by the fact that detoxification mechanisms that rapidly deactivate and filter BPA from the body are not fully functional in the fetus and newborn. Most BPA is detoxified through a process known as glucuronidation, and the body's glucuronidation systems are not fully developed at birth (Schonfelder, Flick et al. 2002; Schonfelder, Wittfoht et al. 2002).

Takahashi exposed pregnant rats to BPA and found both the mean and maximum retention times of BPA in fetuses are longer than in maternal blood. (Takahashi and Oishi 2000) Hepatic glucuronidation activity in children aged 13–24 months was found to be 12- to 40-fold lower than in adults for five pharmaceutical drugs (Strassburg, Strassburg et al. 2002).

These findings provide evidence that exposure to BPA is pervasive and inclusive of the most vulnerable members of the population, namely the developing fetus, infant, and child. The body's immature detoxification systems result in greater exposure to the harmful form of BPA during infancy — a vulnerable period for brain and reproductive system development.

EWG's measurements of infant formula and various tests finding BPA leaching from polycarbonate baby bottles indicate that heightened pre-natal exposures might be followed by an intense period of dietary BPA exposure, resulting in much greater vulnerability for infants as opposed to children and adults.


Additional sources of BPA exposure in the human population

Canned food is a predominant, but not exclusive source of daily BPA exposure. BPA is found in many everyday products such as the hard clear plastic food containers — including baby bottles, baby toys, dental fillings and sealants, electronics, adhesives, paints and varnishes. BPA is found in a variety of other PVC plastics. Brominated BPA is a fire retardant with widespread use in the plastics used for electronics.

Another common source of BPA exposure is from tooth-colored dental fillings or sealants — which can contain up to 50 percent BPA (FDA 2004). Most exposure assessments consider these exposures to be intense but short lived since BPA is rapidly excreted from the body.

BPA is used in a variety of industrial products most of which result in little exposure for the general population. However worker exposures in these settings would be a particular concern for the smaller number of people with on-going, high level exposures. These might include plastics manufacturing for mobile phone housings, displays, computer parts, household electrical equipment, lamp fittings, automotive plastics, thermal paper and printing inks (CERHR 2006).

BPA is a building block for polycarbonate plastic and epoxy resins. BPA and related compounds leach from plastic and metal can linings into food and drinks — particularly after heating or as plastic ages — and from dental sealants.