Good Food on a Tight Budget: It Can Be Done 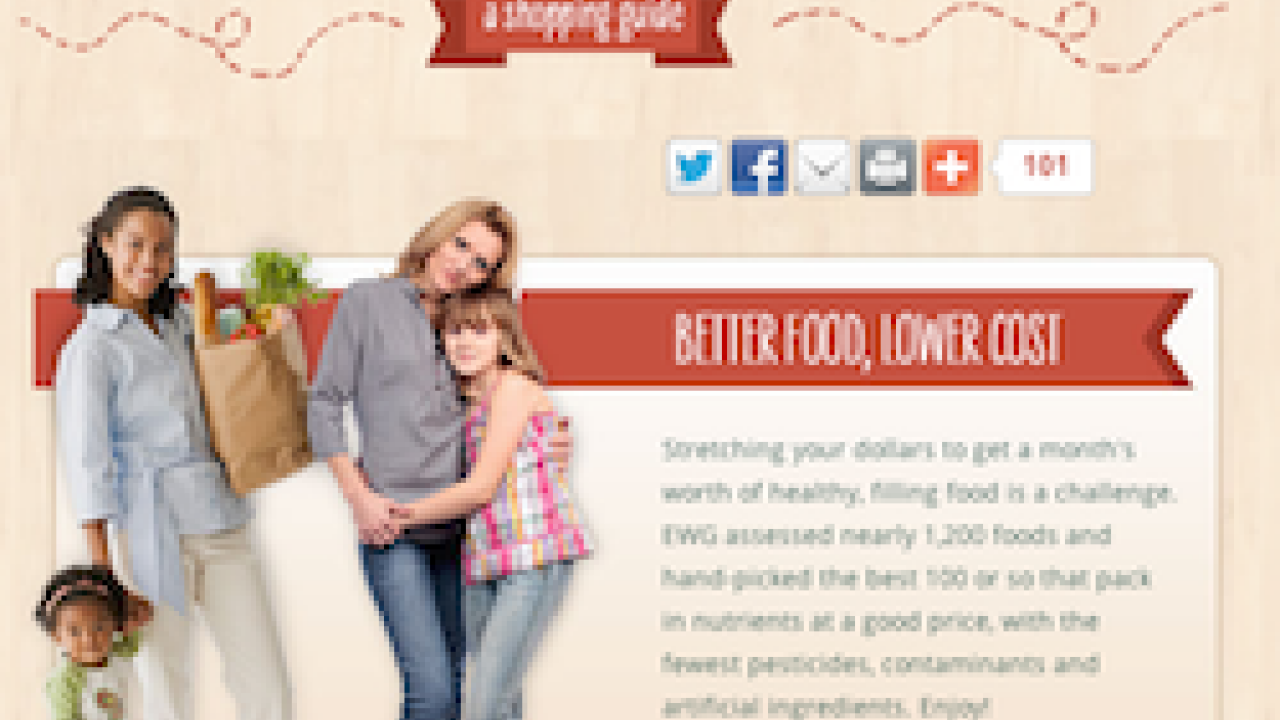 The Environmental Working Group’s new food guide can help. The guide shows shoppers how to manage their grocery costs while reducing their exposure to toxic chemicals and rediscovering the savory pleasures of nutritious stews, soups and salads.

Walk into any corner store and you’re likely to find you can get two glazed donuts for less than a conventional apple – if you can find an apple. You can join KFC’s email club and get coupons for fried potatoes and chicken, but when did you last see someone giving out coupons for fresh fruit or vegetables?

The premise that healthy food is expensive has been repeated so often that nobody thinks to question it anymore.

In fact, when a report earlier this year by the government’s highly regarded Economic Research Service suggested that healthy food can be affordable, it was met with skepticism. But EWG crunched the numbers and found that, sure enough, a delicious diet that is good for your health and the planet really doesn’t have to cost a lot. We found that one serving of fruit or vegetables can be had for less than the cost of a postage stamp, on average, and that you can eat five to nine servings of produce for less than the cost of a city bus ride.

Sure, providing healthy food for a family on a tight budget is a challenge, but it can be done. Today’s families, particularly those struggling in tough economic times, are often short on the things that our predecessors had – time to plan low-stress, healthy, hearty meals, and the skills to cook them. Many people live in food deserts, with limited access to fresh or frozen fruits and vegetables, whole grains, good meat and dairy products. Or they may be swayed by marketing campaigns – persuaded that they want or need convenience foods or that their children won’t eat anything but.

EWG’s new guide, Good Food on a Tight Budget, was created to support families as they take on the task.

It has lists to help shoppers fill their grocery carts with delicious, nutritious, clean and green foods, along with easy and tasty recipes that average less than a dollar a serving. It offers proven money-saving tools for tracking food prices and planning meals. We were even able to throw in some coupons for vegetables – thanks to Earthbound Farms and Birds Eye.

The top 100 or so foods in the guide were chosen after an in-depth review of nutrients and prices for nearly 1,200 foods. EWG assessed 19 different nutrients and national average prices to pick out foods that are loaded with nutrients, usually low-cost and raise few, if any, environmental health concerns such as pesticide residues, BPA, mercury and high greenhouse gas emissions.

EWG’s guide, in conjunction with the tools offered by Share Our Strength’s Cooking Matters program, can help families manage their grocery costs while rediscovering the kinds of stews, soups, and salads that previous generations embraced. Grandma’s healthy coleslaw, beans, barley soup and desserts of fresh-sliced fruit were good food at a good price. And at less than a dollar a serving, they were frugal too.

Most people won’t be surprised to see that healthy and affordable choices from the produce aisle – such as broccoli, carrots, cabbage, okra, sweet potatoes, bananas, pears and watermelon – made the list. But you may be surprised to learn:

What do you do with parsley? Try combining it with one of the most nutritious and affordable grains – bulgur – and you have tabbouleh, a traditional Middle Eastern salad, which for 58 cents a serving packs a lot of nutrition at low cost. Add your favorite beans (garbanzos are a good choice), throw it in a wrap, and you have a delicious lunch for less than a dollar!

If you are wondering why your favorite foods didn’t make the list (where’s chard?), the information we used to create our lists is available here. (Chard, for example, is an excellent food with nearly 1,000 mg of potassium per 1 cup serving, but it doesn’t contain much folate and has more sodium (300 mg) than other vegetables. On average, it’s also more expensive than other dark green vegetables.)

Good Food on a Tight Budget features recipes from Share Our Strength’s Cooking Matters, a national program that helps families at risk of hunger get the most from their food resources. It’s part of the No Kid Hungry campaign to end childhood hunger in America.

Variety is important for health and good nutrition. EWG encourages shoppers to use its lists as a starting point but to try other affordable foods, especially from the fruit and vegetable aisles.