Farm livin': Not the life for toads 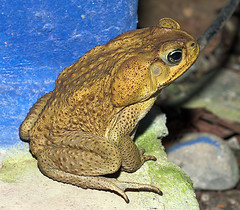 Living on or near agricultural land has feminizing effects on male cane toads, according to a recent report by Florida scientists. After comparing toads from a range of areas, from non-agricultural suburbia to 97% farmland, they found that male farm toads were more likely to have female physical traits. In the two heaviest agricultural areas examined, 60% of the male toads were feminized to some degree, and 40% were fully intersexed (meaning they had equal parts male and female reproductive tissue).

In the unlikely case that you're thinking "Okay, so there are some girly frogs, who cares?" - - Allow me to explain. For starters, amphibian levels are tanking, and that disrupts the entire food chain (which, despite our distance from our food sources, we are still a part of). Not startling enough for you? How about this: toads and humans have the same sex hormones and very similar endocrine systems. If we're only just figuring out that hormone disrupting agricultural chemicals are having profound effects on toad reproductive systems, what more subtle effects are they having on us?