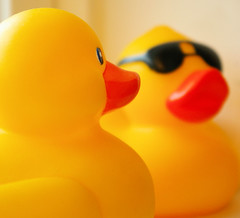 Good news for parents and children everywhere: Congress has agreed to a ban on three dangerous phthalates in products made for children under 12. The decision came in spite of the chemical industry's desperate (and well-funded) attempt to shut the provision down. Exxon-Mobil alone spent a significant portion of its $22 million lobbying budget on the project, according to Lyndsey Layton at The Washington Post.

The provision, which would also require extensive testing of three other types of phthalates before potentially banning them, is a part of a major piece of legislation overhauling the Consumer Products Safety Commission. Although President Bush has said that he disagrees with the phthalate ban (no surprise there), I'm willing to speculate that it would probably be hard for him to veto the entire bill, since its purpose is to protect American consumers.

This is, of course, a major step in the right direction, but is it a harbinger of major change to come? Andy Igrejas of the Pew Charitable Trusts told Layton,

"The debate over this one set of chemicals is a referendum on a broken system. Congress saw just how screwed up the system is in protecting people from chemicals, especially children."

Meanwhile, Layton writes that the ban "signals an important crack in the chemical industry's ability to fend off federal regulation and suggests that the landscape may be shifting to favor consumers." Here's hoping they're right -- we're about due for a landscape shift.