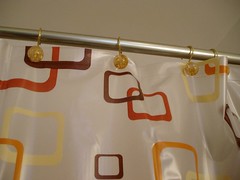 It may not be news to regular Enviroblog readers, but it's official: new shower curtain smell is caused by toxic chemicals.

A study commissioned by the Center for Health, Environment, and Justice looked at the chemical composition of PVC shower curtains bought at a variety of retailers (from Sears to Bed Bath & Beyond). They found, unsurprisingly, that shower curtains contain high levels of phthalates. They also found high level of organotins, and the single shower curtain tested for off-gassing released 108 different volatile organic compounds (VOCs).

Which kinds of VOCs? Not that there's any such thing as a good VOC, but these are some particularly nasty ones. In fact, seven of them are considered hazardous air pollutants by the EPA. All kinds of fun possible health effects too, from asthma attacks to liver toxicity.

But there is good news. Many retailers are offering a greater selection of PVC-free shower curtains, made of other types of plastic or fabrics. Sears (which owns Kmart) and Target both told reporter Tami Abdollah that their companies were phasing out PVC shower curtains altogether.

What's troubling is that it takes health and environmental advocates to get clearly hazardous products off the shelves. Our toxic chemical regulatory system leaves consumers to fend for themselves, without even giving them the information they need to make decisions. Have I mentioned the Kid-Safe Chemicals Act? Yes? Just making sure.