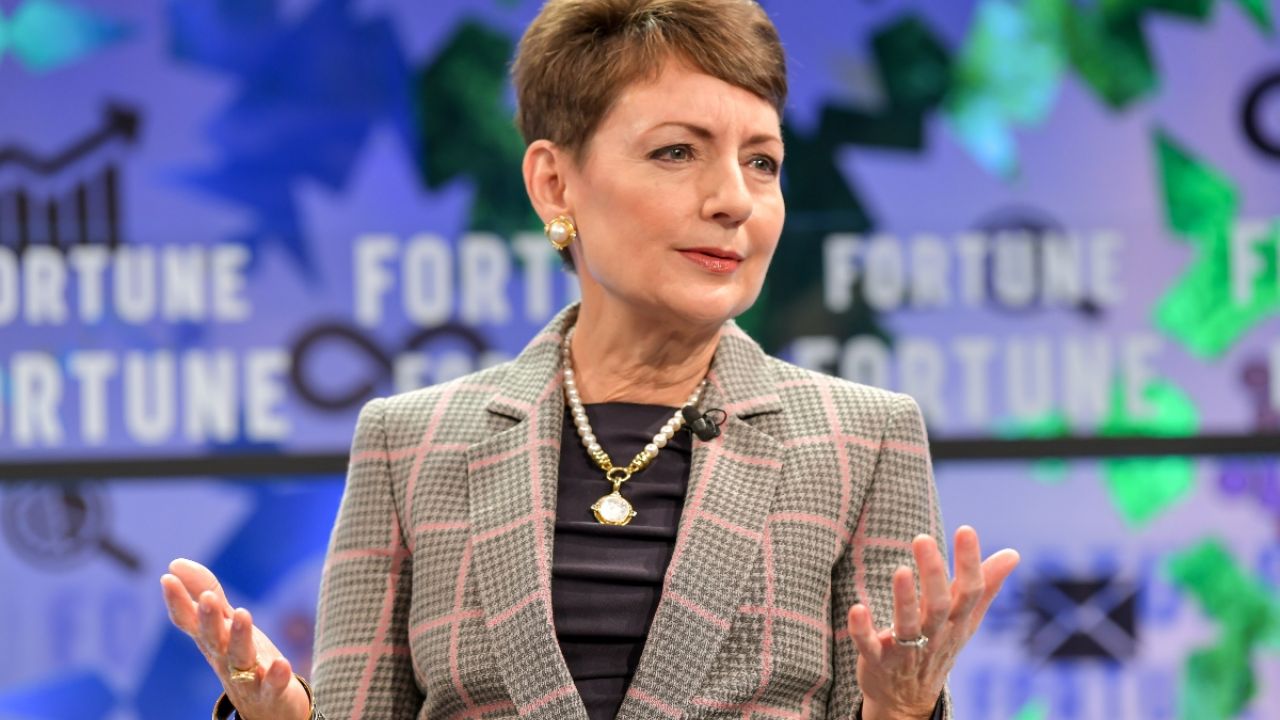 In an interview last month for TIME, Duke Energy CEO Lynn Good began by saying what a utility executive should say now, as the climate crisis demands a rapid transition to clean, safe, renewable energy:

But for anyone looking for signs that Duke – the largest investor-owned U.S. electric utility, with 7.7 million customers in the Carolinas, Florida, Ohio, Kentucky and Indiana – aspires to be a leader in the green energy revolution, the interview quickly went downhill.

Asked how Duke plans to meet its much-touted goal of net-zero carbon emissions by 2050, Good waffled:

Renewable deployment is going to be a part of the story. . . . Because as we look at the next three decades, we need some new technologies in order to get to net-zero. . . .

I don’t know if I’m gonna be choosing nuclear or carbon capture or long-duration storage . . . and so making that prediction of what it’s going to look like in 2050 will depend a lot on what technologies develop. We are not prepared to say it’s going to be a future of 100% renewables.

Good’s rhetorical dodge was consistent with what the company has told regulators and investors. Its most recent Climate Report and Integrated Resource Plans for its biggest market, the Carolinas, were maddeningly vague on specifics about how to reach net-zero carbon. But those documents, Duke’s track record and its current conduct reveal an agenda sharply at cross purposes with the urgent need for the transition to green energy and with how more progressive utilities are facing the future.

Doubling down on natural gas, clinging to coal

Last July, massive cost overruns and regulators’ opposition forced Duke and Dominion Energy to cancel the $8 billion Atlantic Coast Pipeline. While Dominion shifted its focus to renewables, Duke doubled down. Its most recent integrated resource plan continues its huge natural gas plant build-out – including plants that would be built as late as 2035, the same year President Biden says the electricity sector must be carbon-free.

Duke’s current and proposed fleet of natural gas plants in North Carolina would result in nearly $5 billion in stranded costs – overbuilt plants that become white elephants – with Duke moving to pass those expenses onto customers through higher monthly bills. Other resources – energy efficiency, wind and solar, energy storage – are already competitive with most natural gas plants, with the costs expected to continue to decline.

Duke also intends to maintain a large coal-fired plant fleet, keeping gas or coal online through 2035 in North Carolina. Duke plans to keep a sizeable portion of its coal fleet operating systemwide through 2030, making it one of the nation’s most coal-dependent utilities, according to a recent Sierra Club report.

As a result, Duke is slowing, not accelerating, its carbon emission reductions. An Energy and Policy Institute report shows that in the near term, Duke plans to reduce its carbon dioxide emissions less than 2 percent per year, leaving most reductions for after 2030 – even though significant declines in greenhouse gases are achievable in this decade with current technology.

Duke can’t see the path forward, but others do

Good said she sees a clear path to cutting carbon through 2030, but beyond that things are murky without new technology. But three recent reports[1] say getting to net-zero emissions by 2035 is achievable, based in large part on investments in clean energy. The reports say net-zero can be reached by:

Only the plan in the National Academy of Sciences report includes the beginnings of a carbon capture infrastructure build-out in this decade. The other two say backfitting existing plants with unproven carbon capture technology is not justifiable with such low natural gas plant use rates. In addition, both suggest that technological advances may eliminate or further restrict the need for carbon capture.

Expansive deployment of carbon capture is not feasible, according to an analysis by the Center for International Environmental Law. The public and financial resources required would be too great, as would the amount of electric power needed to run the technology and infrastructure to pipe and store the carbon.

While Duke is busy adding to the climate crisis, investors are increasingly pressuring utilities and other companies to consider climate risk.

At Duke’s annual meeting last year, more than 37 percent of shareholders supported a climate initiative from New York City’s retirement system. After the meeting, Good lamented what she called an “assault” on natural gas.

Investors are putting trillions of dollars in so-called ESG stocks – environment, sustainability and governance – with 40 percent of the $17 trillion in such investments last year going to climate initiatives.

“We are strong advocates for nuclear power,” Good told TIME. But the costs of Duke’s preferred technology, NuScale’s modular nuclear unit, have doubled in just the development stage, and NuScale’s initial pilot project has been postponed until the end of the decade, according to M.V. Ramana, a public policy scholar at the University of British Columbia. The prospects for so-called advanced nuclear technology are no better.

Duke has essentially no onshore wind farms in its regulated territories – an option that has been cost-competitive for some time, with costs continuing to drop.

According to the American Council for an Energy Efficient Economy, increased efficiency in Duke’s monopoly utilities in the Carolinas are reducing sales of electricity about 1 percent a year, far below the best programs saving customers well over 3 percent. But a 2017 report by the National Renewable Energy Lab, or NREL, shows that single-family homes can cost-effectively reduce electric usage by more than 10 percent in North Carolina and 6 percent in South Carolina, primarily by replacing worn-out central heating units and water heaters with much more efficient replacements.

But Duke has shown no indication that it will pursue an aggressive energy efficiency program. And it continues to overstate its projections for electric demand in the Carolinas, says the Institute for Energy Economics and Financial Analysis, unnecessarily adding to customers’ electric bills.

Near the end of the TIME interview, Good said:

I completely respect different voices in the conversation and the fact that not everyone’s going to agree with everything we do. We are very active engaging with stakeholders from the environmental community, from various customer groups, because we want to hear what they have to say.

EWG chronicled Duke’s tone deaf attitude toward its customers, demonstrating how the utility continually works to undermine customer savings from energy efficiency and solar investments, has all but ignored affordability issues for its low-income customers and continues to make money off of disastrous business decisions.

In the conversation about getting to net-zero carbon, a chorus of voices – scientists, elected officials, regulators and 7.7 million customers – are telling Duke:

Duke says it hears those voices. Now it’s time to act on them.

[1] The reports are from the University of San Francisco and Lawrence Berkeley Lab,the Goldman School of Public Policy at the University of California, Berkeley; and the National Academy of Sciences, Engineering, and Medicine.

[2] Technical potential is not economic potential. However, building out only a portion of the total capacity available onshore and offshore in the Carolinas would fundamentally alter Duke’s energy mix going forward, with much less emphasis on natural gas and sustaining its coal fleet.