The two hormone-disrupting fungicides imazalil and thiabendazole, one of which is also a likely carcinogen, were detected on nearly 90 percent of non-organic citrus fruit samples in tests commissioned by EWG. More than half the samples contained both fungicides.

Both chemicals disrupt the body’s hormones, or endocrine system, which regulates metabolism, growth and development, and other important functions. They can also harm the reproductive system, and California scientists classify one of them as a chemical known to cause cancer.


In January and July 2020, EWG scientists purchased and peeled 25 samples of conventionally grown grapefruit, lemons, mandarins and oranges. The edible portion of the fruit was tested for pesticide residues by an independent laboratory accredited by the state of California.

The highest levels of imazalil and thiabendazole were found on mandarins, including clementines, followed by oranges and then grapefruit. Organic samples, two oranges and one grapefruit, did not have detectable levels of fungicides. (For detailed results, see the Appendix.) [link] The fungicides detected on citrus are typically applied after harvesting to prolong shelf life and prevent rotting.

The average concentration of imazalil detected in all fruits tested was about 20 times the amount EWG scientists recommend as a limit to protect children against increased risk of cancer. For thiabendazole, more research is needed to determine a safe limit for children’s health. (See details in Methodology.)

Two Toxic Fungicides Were Found on Most Citrus Fruit Samples

Source: EWG, from laboratory tests in January and July 2020

The increased travel and storage time required to import products could explain the difference. Average levels of imazalil found on imported tangerines were higher than those of domestic samples tested by the Department of Agriculture between 2011 and 2012 and in 2019 and 2020, but that was not the case for more than 700 orange samples tested by the USDA in 2016.

Imported Citrus Had Much More Fungicide Residue Than Domestic Fruit 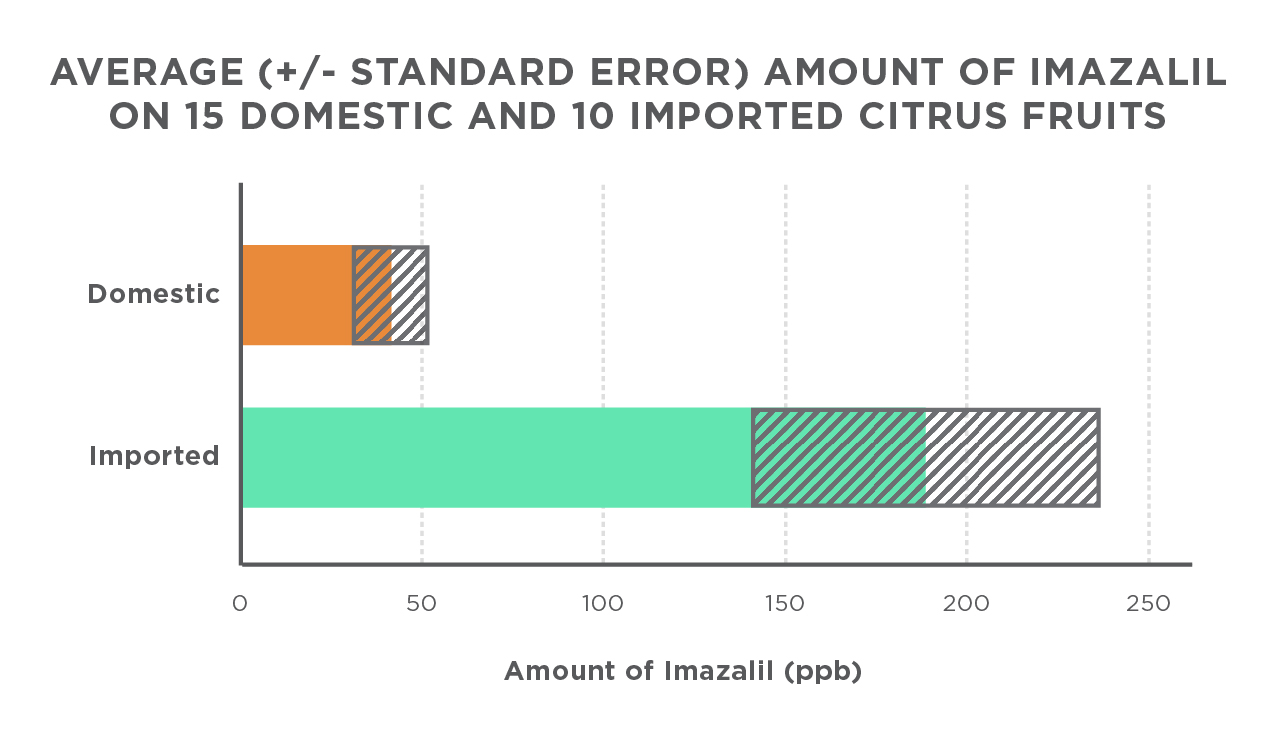 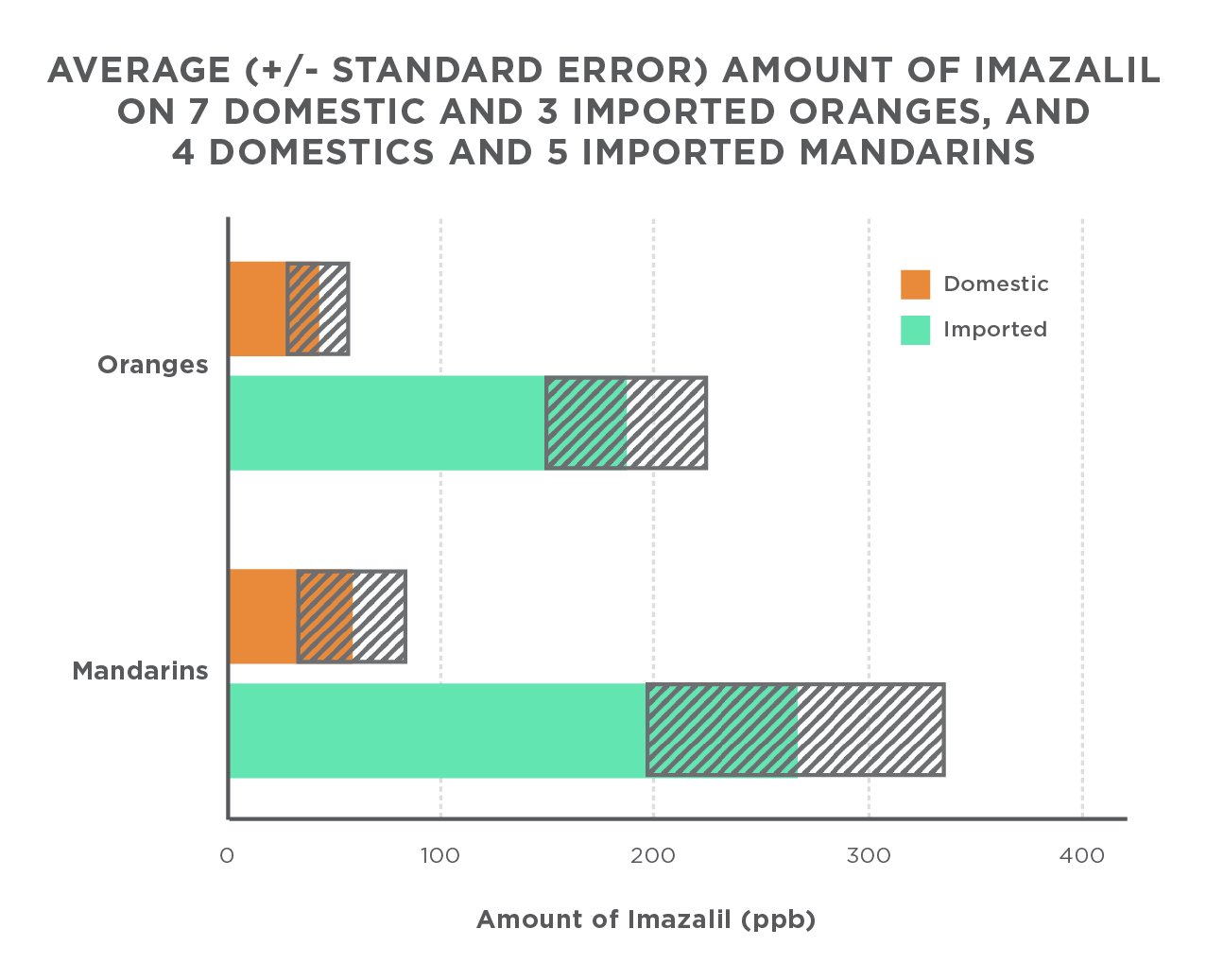 Source: EWG, from laboratory tests in January and July 2020

Under the landmark Food Quality Protection Act of 1996, or FQPA, the amount of pesticides allowed on food should be subject to an additional tenfold safety factor to account for the increased vulnerability of infants, children and the developing fetus. Yet as an EWG study found last year, the Environmental Protection Agency has failed to apply the extra FQPA margin of safety for dietary exposures to the most common pesticides, including imazalil and thiabendazole.

The EPA removed the tenfold children’s health factor for imazalil, despite acknowledging in 2018 that the fungicide was neurotoxic to adult animals – findings we believe should mandate not only further study but also extra protection. Additionally, some studies show evidence of neurotoxicity in mice that were exposed to imazalil during development.

The EPA’s own studies show that imazalil can bind to hormone receptors and alter the production of estrogen. These findings are also supported by independent peer-reviewed studies indicating imazalil can change hormone levels and disrupt the endocrine system in laboratory animals.

Similarly, according to the EPA’s assessment, thiabendazole caused harm to the immune and nervous systems and thyroid in adult animals. In previous EPA assessments of thiabendazole, the agency suggested that a study of its developmental thyroid toxicity was needed.

Yet in subsequent reviews, the request for this study was waived, even though the manufacturer gave the EPA no new data. In Europe, thiabendazole was reapproved for use in 2017, with a provision that the manufacturer submit data on its hormone-disrupting properties. In April, the European Food Safety Authority, or EFSA, determined that more data were needed to reach a conclusion.

Imazalil is not only a hormone-disrupting chemical, but in 1999, it was also classified by the EPA as “likely carcinogenic to humans,” based on evidence it caused liver and thyroid tumors in rats. In 2018, the EPA’s most recent assessment of imazalil’s human health risk identified increased cancer risks for farmworkers from the post-harvest application to citrus.

In California alone, more than 35,000 pounds of imazalil were applied in 2017, mostly on oranges grown in Fresno, Kern, Santa Clara, Tulare and Ventura counties.

Fungicides Use on Citrus in California in 2017

*These amounts refer to pounds of chemical applied for agricultural use in particular.

In 2011, California added imazalil to the Proposition 65 registry of chemicals known to cause cancer. The state’s Office of Environmental Health Hazard Assessment, or OEHHA, has calculated a No Significant Risk level for cancer of 11 micrograms of imazalil per day.

In EWG’s tests, the average level of imazalil on oranges sampled was 86 parts per billion, or ppb. Once ppb are converted to micrograms, our tests show that consumption of a medium-sized orange with that level of the fungicide would result in exposure to imazalil exceeding OEHHA’s No Significant Risk level. (See details in Methodology.)

This is particularly concerning for children.

According to a study published in 2015 in the American Journal of Pediatrics, citrus fruits were the fourth-most-consumed fruit among American children and youth ages 2 to 19, after apples, bananas and melons. For fruit juice, citrus juice consumption was greatest, followed by apple juice and other fruit juices. Citrus and citrus juice consumption was highest among Asian American and Hispanic children, respectively. Importantly, oranges and orange juice, along with apples and bananas, are some of the most affordable fruit options in the U.S.

In 2018, imazalil on citrus fruit came under additional scrutiny by EFSA, showing that current maximum tolerance levels may need to be reconsidered because of the potential toxicity of the imazalil breakdown product, also found on citrus. In light of this, EFSA proposed reducing the tolerance level to 10 ppb – 1,000 times lower than the current U.S. level – effectively eliminating the post-harvest use of imazalil.

In USDA tests from 2019 and 2020, 21 percent of 642 non-organic orange juice samples had detectable levels of imazalil, and 30 percent contained thiabendazole. One of 48 organic samples tested by the USDA had detectable levels of both fungicides. In USDA tests of orange juice, the average concentration of fungicides was two- to three-fold lower than the average concentration in whole fruit.

In EWG’s tests, fresh-squeezed non-organic orange and tangerine juices contained both fungicides, whereas the remaining three non-organic and three organic citrus juice samples did not have any detectable levels of fungicides.

ND = None detected; the laboratory limit of detection for these pesticides was 10 ppb.
* This sample also had residues of the fungicide fludioxonil (18 ppb).

Unlike oranges shipped as whole fruit, those harvested for juice are typically processed shortly after harvest, reducing the need for post-harvest fungicides.

Furthermore, the detection frequencies of all fungicides increased from 2011-2012 to 2019-2020, and the average concentration increased for all but imazalil.

Citrus growers may be turning to multiple fungicides due to the growing problem of fungicide resistance. A 2018 USDA study of California citrus crops reported that strains of gray mold can be resistant to three commonly used fungicides, thiabendazole, azoxystrobin and pyrimethanil. The prevalence of resistant strains increased from 2015 to 2016.

These other fungicides have potential health risks. Like imazalil, fludioxonil can change hormone levels in cells, and its safety has been questioned in peer-reviewed studies. Similarly, pyrimethanil has been shown to harm the reproductive system in frogs.

Very little research has focused on how these fungicides may act together to harm health, even though more than 70 percent of citrus in EWG’s tests had two or more fungicides.

Fungicide resistance is an issue not only for growers but also for public health. Several fungicides used in agriculture have medical uses. As the Centers for Disease Control and Prevention reported in 2019, drug-resistant yeast strains are an emerging threat to public health. Despite these growing concerns, the pesticide industry went to great lengths to remove fungicides from consideration in new international guidelines for drug resistance, as the The New York Times recently reported.

EWG believes pesticides linked to cancer and hormone disruption should not be found on popular fruits that children eat. In 2019, EWG submitted official comments urging the EPA to reevaluate the use of these fungicides for post-harvest application on citrus, in light of potential harm to children’s health. More recently, EWG called on President Joe Biden to ban or restrict a number of harmful pesticides, including imazalil.

Synthetic pesticides are not allowed on organic citrus, and no fungicides or other pesticides were detected on the organic samples EWG tested. Preventing plant diseases and fungal spoilage is a challenge for conventional and organic citrus farmers, and innovative approaches to prevent fungal growth, which are being investigated by industry and academic researchers, are urgently needed.

Until safe and effective anti-fungal technologies are developed, children’s health should not be compromised by fungicide use on citrus, a source of vitamin C and other nutrients important for good health. Organic citrus fruits and fruit juices are the best choice for families looking to avoid synthetic fungicides. Choosing domestic or locally sourced citrus, and choosing grapefruit over sweeter citrus varieties, may reduce exposure to post-harvest fungicides.

Pesticide analyses were conducted by Anresco Laboratories of San Francisco, which is accredited by the state of California. The laboratory followed an established methodology to extract pesticides from the samples and then measure the amount of pesticide present using liquid chromatography tandem mass spectrometry.1

Analysis was requested for imazalil and thiabendazole specifically. However, these fungicides are part of a greater pesticide analysis panel. If other pesticides were detected on the samples, they were reported too. Detailed sample information and results can be found in the Appendix.

The estimated limit of detection for each pesticide was 10 parts per billion, or ppb. For all samples that had non-detectable levels of pesticides reported, a value of zero was used in average calculations.

To determine the EWG benchmark for imazalil in citrus, we used a serving size for fruit of 140 grams, as recommended by the Food and Drug Administration, which is about the size of a medium orange. According to California’s Office of Environmental Health Hazard Assessment, or OEHHA, a No Significant Risk level, based on a 1-in-100,000 cancer risk, is 11 micrograms per day. To determine EWG’s daily allowable limit of imazalil consumption, we expanded this calculation to determine a 1-in-1 million cancer risk, as is commonly done for water contaminants.

EWG also accounted for children’s increased susceptibility to the effects of carcinogens by using an age-adjusted cancer slope factor, as recommended by OEHHA and the Minnesota Department of Public Health. Following these guidelines, we calculated an allowable daily limit of imazalil exposure to be 0.7 micrograms per day. This limit would be reached by consuming a 140-gram serving of citrus containing 5 parts per billion (equivalent to 5 nanograms per gram) of imazalil.

For thiabendazole, there is not enough data to determine a safe level of exposure. Therefore, a default benchmark based on the limit of detection, 10 parts per billion, was used.

Source: EWG, from tests by Anresco Laboratories of products purchased in January and August 2020. Samples were purchased in grocery stores in the Washington, D.C., metropolitan area and online.

ND = None detected; the laboratory limit of detection for these pesticides was 10 ppb.