One reason nine out of 10 Americans want genetically engineered, “GMO,” food to be labeled is their concern over the escalation of herbicide spraying on hundreds of millions of acres of GMO crops.

EWG has mapped corn and soybean fields located near almost 15,000 elementary schools and churches. These fields are overwhelmingly planted with GMO varieties engineered to tolerate intensive applications of the potent weed killer glyphosate. Glyphosate, the active ingredient in Monsanto’s Roundup probably causes cancer, according to the World Health Organization’s International Agency for Research on Cancer.

Though GMOs were supposed to reduce the amount of toxic herbicides used across the United States, in fact, the opposite has happened. The amounts of glyphosate sprayed on America’s farmland have skyrocketed. The use of glyphosate has increased 16-fold between 1992 and 2012.

The map below shows amounts of glyphosate sprayed on farmland in each county. The 11,660 churches within 1,000 feet of a corn or soybean field are shown as yellow dots; the 3,247 elementary schools near these fields are shown as red dots. 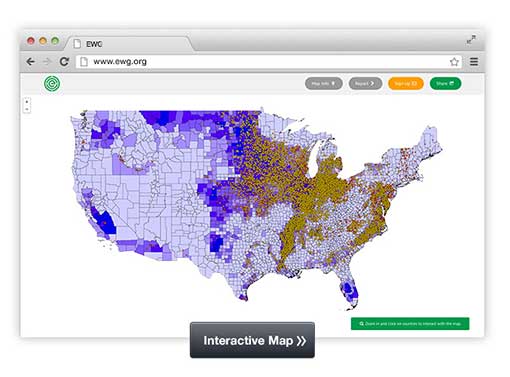 Over time, excessive glyphosate use has led to the fast-paced emergence of “superweeds” that can survive glyphosate applications. To help kill these hardy species, many farmers are resorting to older, more toxic defoliants such as 2,4-D, which the International Agency for Research on Cancer has called a possible carcinogen.

Dow AgroSciences is pushing a new generation of GMO corn and soybeans engineered to tolerate its new, stronger weed killer, Enlist Duo, which contains both glyphosate and 2,4-D. Exposure to both herbicides have been linked to non-Hodgkin lymphoma.

People want to know more about how their food is produced – not less. And the vast majority of consumers – regardless of political party, age, race or education level – agree that GMOs should be labeled.