Between 2003 and 2017, tests detected elevated levels of nitrate (3 milligrams per liter, or 3 mg/L) in the tap water supplies of 1,181 towns and cities in California, serving almost 28 million people.

In 57 percent of these community water systems1 – 669 systems serving approximately 14 million people – contamination is getting worse. Larger towns and cities tend to depend on surface water for drinking, whereas smaller, often rural, communities depend on groundwater. This is strikingly true for California. Just over 10.3 million residents of 117 larger California towns and cities that rely on surface water faced increased contamination during the period studied. But 552 mostly small, rural communities, serving nearly 4 million people, that depend on groundwater also saw nitrate contamination increase.

California Communities With Increases in Nitrate Contamination, 2003 to 2017

Average Nitrate Levels in California Communities Where Contamination Rose, 2003 to 2017 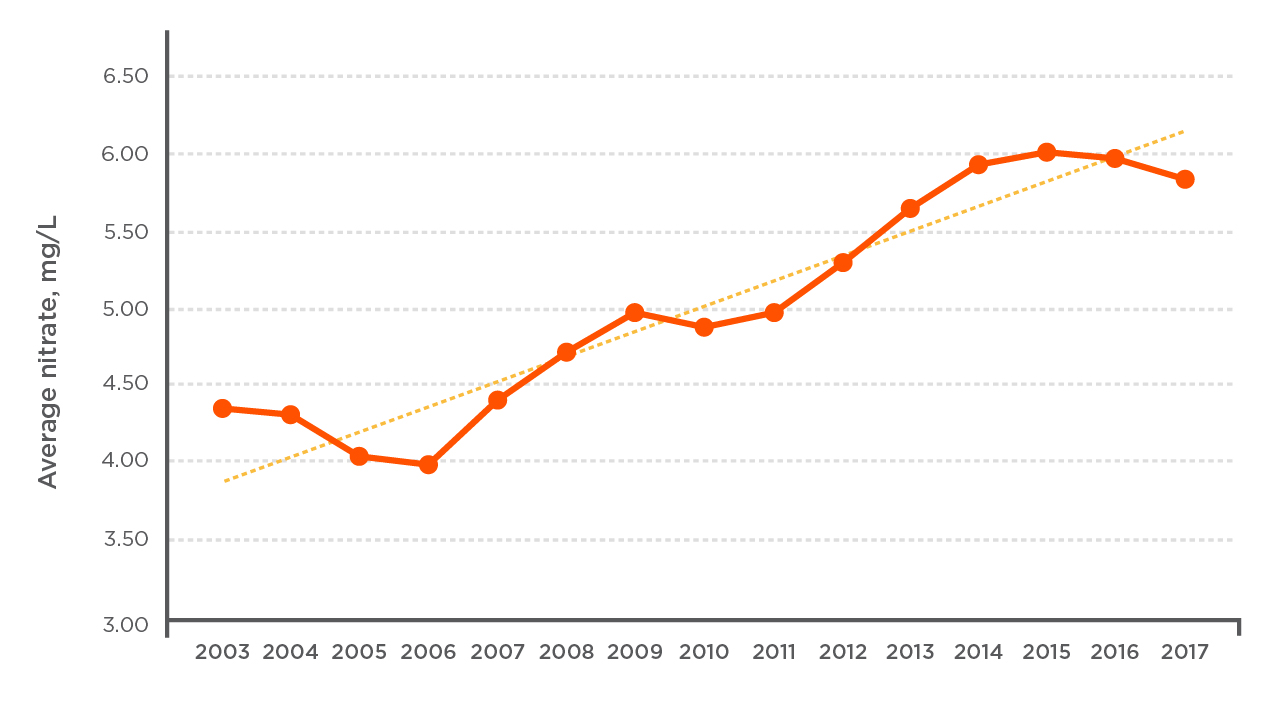 But more recent studies show strong evidence of an increased risk of colorectal cancer, thyroid disease and neural tube birth defects at levels at 5 mg/L or even lower. During the period studied, drinking water got worse in 502 California communities, serving almost 13 million people, that had already tested at or above 5 mg/L at least once in the previous 15 years.

People who want to know the level of nitrate in their community’s water system can visit the California page of EWG’s Tap Water Database.

During the period studied, smaller communities were more likely to have worsening contamination. Sixty-nine percent of systems with worsening nitrate contamination served 3,300 people or fewer.

But out of all 10 states, California had the highest proportion of larger systems that had worsening nitrate. Twenty-two percent of systems with increasing nitrate served over 10,000 people. For our analysis, systems were put into the EPA-designated size categories based on how many water customers they serve.

California was one of three states where nitrate contamination was more likely to be getting worse in urban than in rural communities. In California, only 29 percent of communities with growing nitrate levels were rural, whereas 71 percent were urban, as defined by the U.S. Census Bureau.

California is a special case, because so much farming there is in what’s known as the urban-agricultural interface, with vast crop acreage inside urban areas. For example, Fresno, a city of more than 500,000 people, is surrounded by 1.88 million acres of cropland in Fresno County, the nation’s most productive agricultural county.

In California, nitrate contamination of drinking water disproportionately affects Latino communities. A recent study found that smaller communities with higher percentages of Latinos were more likely to have elevated levels of nitrate in their drinking water. Considerable research also has been done showing that the health risks of nitrate contamination impact Latino households at a greater rate, and that these communities are often low-income and cannot afford the high costs of removing nitrate from drinking water.