Many agricultural and agribusiness interests argue that more people will go hungry unless American farmers dramatically ramp up their crop and livestock production. They claim that "modern" farming, with its long train of environmental and social ills, is the only way to feed a hungry world.

Where Do U.S. Food Exports Go?

Poverty is the main reason people go hungry. Nearly all the agricultural products the U.S. exports go to countries that can afford to eat more meat and diversify their diets. As a result, 86 percent of all our exports in 2015 went to countries such as China, Canada, Mexico, Japan and the European Union – where most people don’t go hungry. 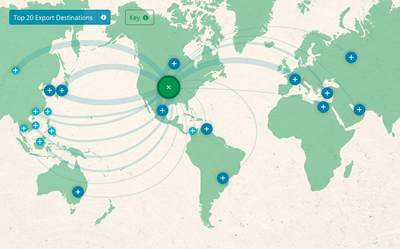 Where are the Undernourished?

Undernourished countries mostly feed themselves. In 2013, food aid and imports from all nations provided only 25 percent of food supplies in the 19 countries with the highest rates of hunger. Less than 1 percent of U.S. agriculture exports went to those 19 countries, and along with food aid, they accounted for only a little over 2 percent of their total food supplies. The U.S contribution of food supplies ranged from 17 percent in Haiti to almost nothing in Timor-Leste. 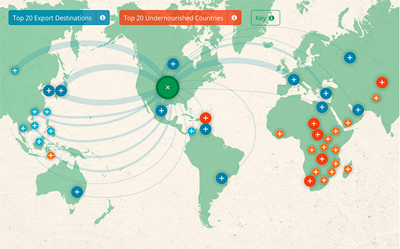 Continue on my phone now
(new window) Send me a reminder to view it later
The truth is...

What Does the U.S. Export?

American agriculture exports fall into five main categories: (1) animal feed (2) food grains (3) fruits, vegetables and nuts (4) meat and dairy, and (5) "other." There are huge differences between the kinds of products we sell to wealthy and developed nations and those we sell to poor and hungry counties.

In 2015, animal feed, meat and dairy made up half the agricultural exports we sold to wealthy countries. In contrast, rice, wheat and other food grains accounted for 59 percent of the products we sent to countries with the highest rates of hunger. 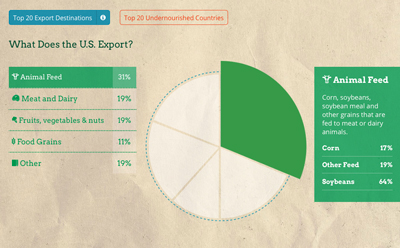 Continue on my phone now
(new window) Send me a reminder to view it later
The truth is...

Meat and food for animals make up half of all agricultural products the U.S. exports to wealthy countries. We mostly send grains that people eat to undernourished countries, but our products provide a minuscule share of their food supplies.

All-out food production in the United States won’t end world hunger. It will be hardworking and mostly small farmers in the developing world who will lift themselves and their people out of poverty. They need our help to farm more productively and profitably far more than they need our exports.

"For years we have known that the main reason why people face the daily anguish of hunger is that they cannot afford the food they need. Production and economic growth alone do not solve the problem, if the hungry remain excluded. Many countries around the world show us that increasing the power of the very poor to buy food offers an affordable key to hunger eradication."

"By 2050, we will need to increase food production by 60% and improve its distribution to feed over 9 billion people. But that is not enough: access and the sustainability of our food systems emerge as key factors for food security. Access because the main cause of hunger today is that poor families do not have the resources to buy or produce the food they need."

"Today, we produce more than enough to feed over 7 billion people, but we lose or waste an average of one-third of all that food. It is easy to explain why. Every year in rich countries we waste almost as much food as the entire net food production of sub-Saharan Africa. With the food we waste we would be able to feed at least 1/3 of the world’s hungry people."

Less than 1 percent of U.S. agricultural exports in 2013 went to the 20 countries suffering the highest rates of hunger according to the United Nations.