Is Teflon in Your Cosmetics?

Most people know Teflon as the coating on nonstick cookware. It’s also used in stain-resistant fabrics, waterproof clothing and an array of industrial applications. Teflon is a brand name for PTFE, one of thousands of fluorinated chemicals known as PFASs or PFCs [1] – some of which have been linked to serious health effects including cancer, thyroid disease and reduced effectiveness of childhood vaccines.

So what are Teflon and a dozen other PFAS chemicals doing in cosmetics?

EWG scientists scoured our Skin Deep® database, which provides ingredient lists and safety ratings for almost 75,000 cosmetics and personal care products, to see which ones contained Teflon or other PFASs.

We found Teflon in 66 different products from 15 brands, including a number of household names. Teflon was the most commonly found ingredient for this class of chemicals, but in all, we identified 13 different PFAS chemicals in nearly 200 products from 28 brands. And it’s not just in makeup: PFASs were also found in sunscreen, shampoo and shaving cream.

Use Skin Deep to find products without Teflon and other PFAS chemicals.

The presence of PFASs and many other potentially harmful chemicals in the products we put on our bodies is a deeply concerning consequence of the antiquated federal regulations governing the safety of cosmetics and personal care products. Those regulations are based on legislation passed in the 1930s, before most of the synthetic chemicals in use today were even invented.

PFASs are among the most worrisome of such chemicals. Compounds historically or currently used to make Teflon, Scotchgard, Gore-Tex, microwave popcorn bags, fast food wrappers and hundreds of other products have polluted people, animals, drinking water and the environment worldwide. According to the Centers for Disease Control and Prevention, fluorinated chemicals contaminate the bodies of nearly all Americans.

DuPont manufactured PTFE, or Teflon, for decades. Its production relied on another PFC known as PFOA. PFOA and its close chemical cousin PFOS, formerly an ingredient in 3M’s Scotchgard, were phased out under pressure from the Environmental Protection Agency after revelations that secret internal company studies showed they caused cancer and birth defects in lab animals, built up in people’s bodies and did not break down in the environment.

Subsequent studies of nearly 70,000 people near a Teflon plant in West Virginia linked PFOA in tap water to kidney and testicular cancer, thyroid disease, high cholesterol and other health problems. Further research has linked PFOA to disruption of the hormone system, and harm to reproduction and development. Even extremely low levels of exposure have been linked to serious health risks, especially for children, and reduced effectiveness of vaccines and low birth weight.

PFOA, PFOS and other highly fluorinated chemicals contaminate tap water for at least 7 million Americans, and likely more than double that number. Although studies show there may be no safe level of exposure to PFOA and PFOS, the Environmental Protection Agency has not set a legal limit for the chemicals in tap water.

Since the phaseout of PFOA and PFOS, chemical companies have replaced them with very similar compounds whose safety has not been adequately studied. Chemours, a DuPont spinoff company, continues to make Teflon using replacement PFASs. Companies claim the replacements are safer, but they may in fact be just as bad. A former EPA toxicologist told The Intercept that DuPont’s study of a replacement called GenX showed “the same constellation of effects you see with PFOA.”

PFOA, GenX and other harmful compounds can contaminate consumer products made with PFASs. Two years ago EWG collaborated with researchers at Notre Dame, EPA and other public interest groups to test food wrappers. PFOA was detected in 30 percent of the wrappers sampled and GenX was found in 10 percent. But these contaminants usually can’t be detected in the final product without expensive testing.

Besides PTFE, EWG identified an alphabet soup of other fluorinated chemicals in the personal care products we assessed – PFH, OFPMA, PFD and others. Absorption of these chemicals through skin is not expected to be a significant route of exposure, but when used on or around the eyes, absorption can increase, posing a greater hazard. There may also be significant variation in absorption depending on the type of PFAS used in the products, and the other PFAS chemicals present.

Not enough is known about the health impacts of these chemicals. Until more is known, EWG strongly urges people to avoid all products with PFAS, including cosmetics and personal care products.

PFAS chemicals are often listed on product labels, so you should be wary of any ingredient with “fluoro” in the name. Our Skin Deep database can also help you identify products that may contain PFASs. If your favorite brand uses PFAS chemicals in its products, urge it to stop. And tell your elected officials to support reform of regulations that allow potentially harmful, but inadequately studied, chemicals into cosmetics and personal care products. 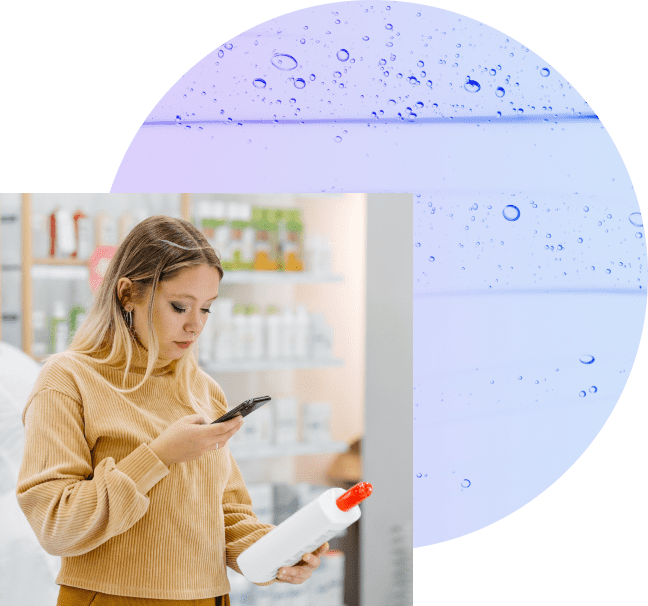 EWG research
on the go