Biomonitoring conducted as part of the NHANES surveys, although not specifically designed to track carcinogen or chemical exposures, provides a representative picture of exposures among typical Americans.

Among the carcinogens that have been measured in NHANES, some – such as arsenic, lead, nitrate, the breakdown product of DDT and the industrial chemical chloroform – were detected in nearly every person. Others that are less commonly used or encountered, such as the solvents dichloromethane and trichloroethylene and isoprene, an industrial chemical used to create polymers, were found in almost no one (Table 1, Appendices A & B).

Heavy metals and markers for many combustion by-products were among the types of carcinogens most frequently detected – found in more than 90 percent of the NHANES population. This reflects the ubiquity of these chemicals in our daily lives, resulting in repeated or continuous exposure.

Pesticides and their metabolites were detected less frequently, in one-third to two-thirds of those surveyed. Exposure to pesticides is intermittent, and many stay in the body for only a short period of time. Consequently, pesticides are less likely to be detected in NHANES than a study that targets biomonitoring sampling around the time of application, which is a more accurate assessment of exposure.

On the opposite end of the spectrum are PCBs and other chemicals that persist in the environment and our bodies for long periods of time. PCBs were banned in the U.S. in 1979, but they were still detected in between 5 percent to 100 percent of the NHANES population, depending on the specific PCB (there are 209 different PCB congeners.) Although levels have gone down since the ban, people are still exposed to PCBs as older products made with these chemicals, such as electrical equipment, hydraulics, and caulking begin to break down. Researchers at Harvard University have found PCBs released from old caulking in public buildings, including schools.5

The body burden has also declined for other chemicals that have been banned or phased out:

Certain populations, particularly workers in occupational settings, can have exposures to chemical carcinogens that are not generally encountered by the general public. The solvents and several of the industrial chemicals, among others, listed in this report (Appendix A) are almost entirely occupational concerns. They are primarily used in production processes and are not present in materials that would exposure the general population. (The exception is industrial pollution contaminating the environment).

In addition, occupational exposures can be magnitudes of order higher than levels experienced by the general public. Average* concentrations of benzene, which is a component of petroleum and found in tobacco smoke, in the blood of workers maintaining crude oil tanks were more than seven times higher than even the typical smoker in the U.S. (Figure 1).6 Police officers exposed to traffic pollution in Rome had benzene levels about twice as high as smokers in the U.S.7 Industrial processes can also pollute the environment, resulting in high exposures to the surrounding area. After the Deep Water Horizon oil spill disaster in the Gulf of Mexico, nearby residents had blood benzene levels that were about five times that of the typical non-smoker.8 It is no surprise that detrimental health effects are often first experienced and detected in highly exposed occupational settings. 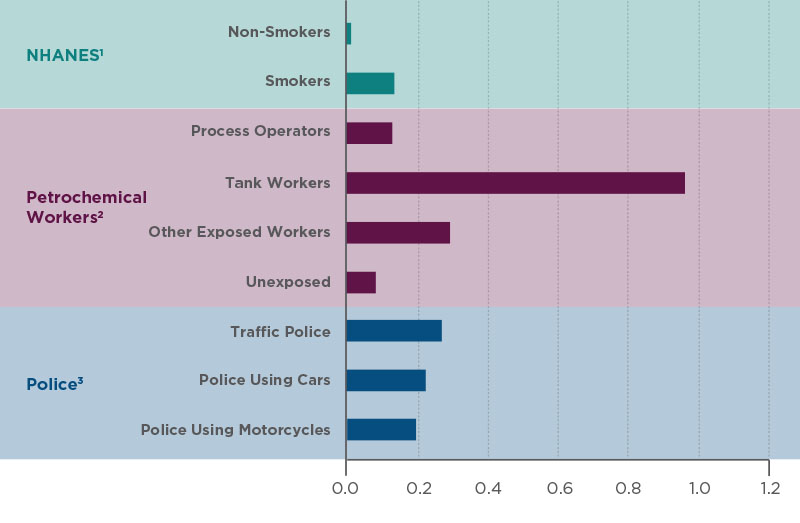 ‹ 1. Measuring Carcinogens in People: Exposures come from a variety of sources 3. Cancer Risk: The contribution of chemicals to the cancer burden ›
Chapters