Before I explain how failure to respond to antigrowth signals is closely involved in the development of cancer, it is useful to define and understand how cell division works. Cancer is, after all, the uncontrolled division of the cell; so we first need to understand how normal cell division is controlled through the cell cycle.

Think of the Cell Cycle as the control system of a washing machine. A washing machine passes through several stages in a wash cycle; soaking the clothes, adding detergent at the correct time, rinsing the clothes for the appropriate duration to remove the detergent, adding the fabric softener at the correct time, a final rinse and then spinning the clothes to remove as much water as possible. In much the same way, the cell cycle is a series of tightly regulated events inside a cell that lead to its division into two daughter cells. In between these start and end states, the DNA inside the parent cell needs to double and then be divided equally between the two daughter cells. Intricate feedback loops of responsive proteins trigger events in the cell cycle, guiding the cell through checkpoints that lie between every stage. These checkpoints are important because they act as safety valves, ensuring that an errant, incorrectly dividing cell with damaged DNA is promptly whisked away and destroyed rather than allowed to continue its life.

The cell cycle has four stages. 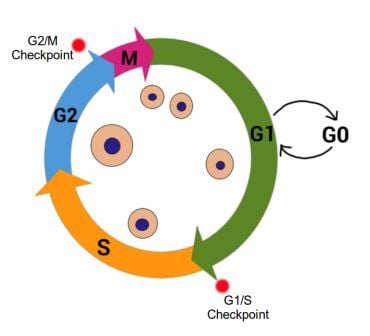 Gap 1 (G 1) - during this stage the cell is actively growing in size, and preparing the required components for DNA synthesis. During and at the end of this stage, the cell monitors its surrounding environment (the microenvironment) to make sure there aren't any 'stop!!' signals. This is known as the G1/S Checkpoint.

Synthesis (S) - DNA replication takes place during this stage. If there is damaged DNA in the cell, it should not be replicated, and the G1/S checkpoint ensures this. The G1/S Checkpoint is extremely important to prevent the replication of damaged DNA.

Gap 2 (G2) - The cell continues to grow in the G2 stage following DNA replication. At this stage, it is vital to recognize any damaged DNA before proceeding with cell division. This constitutes the G2/M Checkpoint. If the cell detects damage to its DNA, it will not proceed to the fourth and final stage of the cell cycle. The first G1/S Checkpoint ensures that the template DNA prior to replication is undamaged, and the G2/M Checkpoint ensures that the newly replicated DNA is error-free before proceeding with cell division.

Mitosis (M) - This stage represents the culmination of the cell cycle. Cell growth stops and the cell divides into two equal daughter cells. Some cells enter a G0 stage known as quiescence which can be considered a place of rest. A cell in G0 has exited the cell cycle, and is neither dividing nor preparing to divide; however, the cell is still alive and actively metabolizing, it has simply stopped dividing. The cell may re-emerge from this quiescent stage back into the cell cycle, given the right signals from its microenvironment. Some cells permanently exit the cell cycle, moving to a post-mitotic state. There is no coming back from this path; it is usually associated with mature cells that have differentiated, i.e. taken their adult form. Therefore a cell, at the basic level, has three choices facing it: continue to grow and divide by staying in the cell cycle, take a temporary break by entering G0, or permanently exit the cell cycle into the post-mitotic state.

Two key classes of regulatory proteins control the checkpoints within the cell cycle. These proteins are known as Cyclins and Cyclin Dependent Kinases (CDKs). Cyclins and CDKs cannot work without each other; they need to 'team up'. Cyclins provide the regulation for the team, and CDKs are the catalyst. CDKs are active only with their specific partner cyclins; this is why they are known as cyclin dependent kinases. In the previous Hallmark of Cancer article, I explained that many proteins exist in an 'active' or 'inactive' state that can be switched by phosphorylation (i.e. adding a phosphate group to the protein), and that kinases are enzymes that add such phosphate groups to proteins. 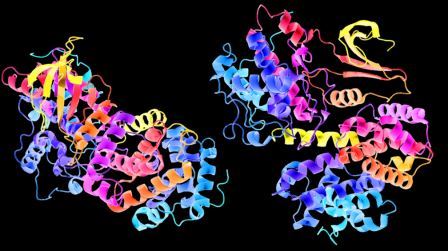 A 3D schematic representation of cyclin a protein. This protein partners with CDK2, for S and G2 stages of the cell cycle. Image credit: Wikimedia Commons.

Each stage of the cell cycle has a specific cyclin/CDK pair that behaves as a single unit, called a complex. Each stage's cyclin/CDK complex is required to allow the cell to commit to and proceed to the next stage of the cell cycle. When activated by a cyclin, a CDK is able to phosphorylate key proteins involved in the networks of chemical reactions in the cell, which in turn are activated and proceed to manufacture the cyclin required for proceeding into the next stage of the cell cycle. It is a beautifully elegant system of control, and it works to ensure that cells grow and divide when they're supposed to, and remain quiescent at all other times.

Antigrowth signals are proteins, exactly like the growth factors that I mentioned in the previous Hallmarks of Cancer article, except that they inhibit growth rather than promote growth. Antigrowth factors can therefore block cell growth by the two mechanisms mentioned above: cellular quiescence through G0 and the post-mitotic state. A cancer cell must therefore evade these signals if it is to continue dividing uncontrollably. During the G1/S Checkpoint, cells monitor their microenvironment to choose whether to continue in the cell cycle, enter G0 or enter a post-mitotic state. At the molecular level, nearly all antigrowth signals are funneled through a protein known as the Retinoblastoma protein. Therefore, Retinoblastoma is classified as a tumor suppressor protein. Indeed, it was the very first tumor suppressor protein to be discovered in 1971 through an elegant process of deduction and statistical analysis of rare eye cancers. 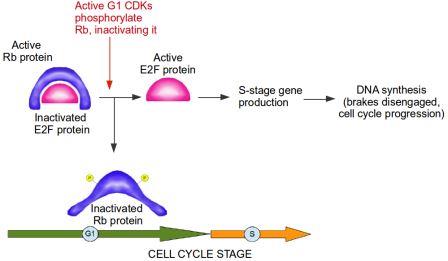 So what are these antigrowth signals? Probably the best documented is the signaling molecule TGF-beta. Recall from the previous paragraph that phosphorylated Retinoblastoma is inactive, and this 'disengages' the brakes on the cell cycle. TGF-beta has many different mechanisms for preventing the phosphorylation of Retinoblastoma (i.e. for preventing the disengagement of the brakes). Therefore, the presence of TGF-beta blocks the advancement of the cell cycle. Unsurprisingly, many cancers target this pathway for disruption. Some cancer cells stop responding to TGF-beta altogether, by producing less TGF-beta receptors on their cell surfaces. Other cancers produce mutated receptors that do not respond to the presence of TGF-beta. Some cancers get rid of downstream proteins that respond to TGF-beta. In many late-stage tumors, instead of functioning as an antigrowth signal, TGF-beta activates a cellular program known as Epithelial-to-Mesenchymal-Transition (EMT), which gives cancer cells stem-cell like abilities that is really bad news to a cancer patient. Finally, Retinoblastoma protein itself, the end target of this pathway, can be lost through mutation of its gene. Interestingly, certain cancer-promoting proteins (oncoproteins) can block the function of Retinoblastoma as well. For example, the human papillomavirus produces a protein known as E7, which binds to and inactivates Retinoblastoma.

The end result is that antigrowth signals, funneled through Retinoblastoma protein into the cell cycle, are, in one way or the other, disrupted in a majority of human cancers. Cancer cells with defects in the Retinoblastoma pathway are missing the services of a critical 'gatekeeper' of cell cycle progression; the absence of the Retinoblastoma gatekeeper permits persistent cell division. Therefore, the insensitivity to antigrowth signals represents a vital breach of an anti-cancer defense mechanism that is hardwired into our cells.

Reprinted with permission of Buddhini Samarasinghe and Scientific American, September 25, 2013