Uncontrolled growth defines cancer. Growth requires a cancer's cells to replicate all of their cellular components; their DNA, RNA, proteins and lipids must all be doubled in order to divide into daughter cells. Of course, this process requires energy. Cancer cells must adjust their metabolism accordingly to enable this frenzied growth.

Cells require energy to absorb nutrients, to react to changes in their surroundings, to maintain their internal environment, grow and replicate. Energy is obtained from breaking down nutrients through a process of metabolic reactions known as respiration. This energy is stored in small molecules known as adenosine triphosphate, or ATP. When cells need energy, they use respiration to construct molecules of ATP; they then break down the ATP to fuel their metabolic reactions. Respiration comes in two forms. Normal cells, under normal conditions, undergo aerobic respiration, which is a metabolic pathway that requires oxygen. Cells break down glucose into pyruvate, to eventually form ATP, while releasing carbon dioxide as a waste product. The oxygen needed is obtained from the air we breathe, diffuses into our blood and is then transported across all our tissues and organs. When there isn't enough oxygen, cells switch to a different type of respiration called anaerobic respiration. During anaerobic respiration, cells break down glucose into pyruvate and construct ATP, but produce lactic acid instead of carbon dioxide. Aerobic respiration produces far more ATP molecules, 32 per molecule of glucose, than anaerobic respiration, which produces a mere two.

In cancer cells undergoing aerobic respiration (pink pathway), glucose gets broken down into pyruvate and then lactic acid, producing only two molecules of ATP. In cells undergoing normal respiration (orange pathway), glucose gets completely broken down into pyruvate, which is further processed into carbon dioxide, producing 32 molecules of ATP. Image credit: Buddhini Samarasinghe

Glycolysis is the process in which cells break glucose down into pyruvate, the first step in constructing the energy transfer molecule ATP. One of the main observations of the metabolism of cancer cells is that they display an enhanced rate of glycolysis during periods of fast growth. This phenomenon is known as the Warburg Effect, after its discoverer Otto Warburg, and is also known (somewhat confusingly) as aerobic glycolysis. Cancer cells consume more than 20 times as much glucose compared to normal cells, but secrete lactic acid instead of breaking it down completely into carbon dioxide. Why do cancer cells choose this inefficient metabolic pathway when they could obtain 16 times as much ATP per molecule of glucose by opting for normal respiration?

The answer is twofold. First, although cancer cells produce far less ATP per molecule of glucose, they produce it much faster. Cancer cells produce ATP almost a hundred times faster than normal cells. It is essentially a cost-benefit calculation, where the benefits of speedy ATP production outweigh the costs associated with inefficient glucose breakdown. Second, it is not just about ATP production. Cancer cells undergoing aerobic glycolysis also produce many intermediate biosynthetic precursors. These molecules are used as building blocks for the production of proteins, lipids and DNA required by the rapidly dividing cells.

How do cancer cells satisfy their voracious appetite for glucose? Glucose typically enters cells through protein channels known as glucose transporters, which act as gateways through the surface of the cell membrane, selectively allowing glucose molecules to enter the cell. Cancer cells actively produce more glucose transporters on their cell surface membranes, so more glucose is brought inside the cell. Once inside the cell, the glucose is broken down by aerobic glycolysis into lactic acid, in order to speedily produce ATP and metabolic precursors through various metabolic pathways. These pathways are tightly controlled, requiring specific enzymes for processing the molecules from each step to the next. Cancer cells are addicted to these metabolic precursors; the enzymes that control these pathways are often over-expressed or mutated in cancer cells. This addiction is exploited in chemotherapy strategies. For example, the drugs 5-fluorouracil, methotrexate and pemetrexed inhibit the biosynthesis of DNA precursor molecules. The high glucose consumption of cancer cells is also exploited when imaging cancer. Positron emission tomography (PET) combined with computer tomography (PET/CT) is used to detect the absorption of the glucose analogue fluorodeoxyglucose (FDG) by tumors, and has a better than 90 percent sensitivity and specificity for the detection of metastases of most cancers.

Cancer cells consume more glucose than normal cells. This is exploited when imaging cancer. Positron emission tomography (PET) combined with computer tomography (PET/CT) is used to detect the absorption of the glucose analogue fluorodeoxyglucose (FDG) by tumours. In this image, besides the normal accumulation of the FDG molecule in the heart, bladder, kidneys, and brain, liver metastases of a colorectal tumor are visible in the abdominal region. Image credit: Jens Maus, Wikimedia Commons

What is the utility of this alternative metabolic pathway to healthy cells? The ability to grow and divide rapidly is useful in the context of wound healing and immune responses. When an immune response is required, immune cells massively increase their glucose uptake, switch from metabolizing glucose through normal respiration to aerobic glycolysis, and switch on the multitude of enzymes that control the biosynthesis of proteins, lipids and DNA. Therefore, there is a strong evolutionary basis for rapid cell division and faster growth despite the inefficient use of glucose in the process. Cancer cells hijack this metabolic switch in order to fuel their own uncontrolled growth.

The Mechanisms of a Metabolic Switch

We therefore know why cancer cells opt to switch from normal respiration to aerobic glycolysis. The next question is how they do this. This is an active area of research, and we are still deciphering the exact mechanisms of this metabolic switch. In a previous article, I explained how tumors often develop regions of low oxygen. This activates the hypoxia stress response, mediated by the hypoxia inducible factor (HIF). However, over recent years, it has become clear that HIF activity is not merely a response to low oxygen levels. HIF can be activated in response to a variety of triggers, such as radiation induced DNA damage, signaling from other proteins, growth factors and the presence of pyruvate. Once activated, HIF can go on to activate genes that support aerobic glycolysis and repress genes involved in normal respiration. HIF clearly plays a central regulatory role in switching the metabolism of cancer cells from normal respiration to aerobic glycolysis. But what are the other signaling pathways that support this metabolic switch? One of the most important pathways is controlled by an enzyme known as Phosphoinositide 3 Kinase (often shortened to PI3K). PI3K can be activated by a variety of survival signals from outside the cell via receptors on the cell surface membrane. Once activated, the PI3K pathway can mediate cell growth and survival, inhibit apoptosis, activate angiogenesis and, notably, activate aerobic glycolysis. In other words, activation of the PI3K pathway supports cancer cells. PI3K activates another protein known as AKT, which then activates the protein mTOR. Once activated, mTOR can also activate HIF, further supporting HIF's efforts to switch cancer cell metabolism from normal respiration to aerobic glycolysis. PI3K signaling is negatively regulated by another protein known as PTEN. It is therefore unsurprising that cancers often have mutations that inactivate PTEN, thus preventing it from inactivating PI3K signaling. 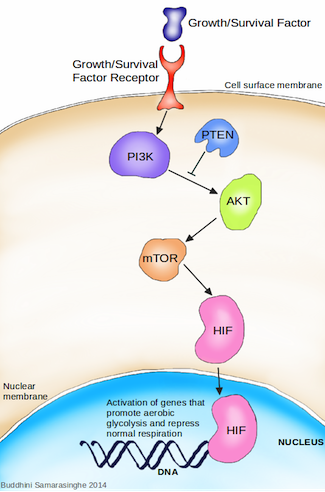 It is increasingly important to understand that cancer progression is not so much a signaling pathway as it is a signaling web. Throughout this series, I have described normal cellular processes that serve to check uncontrolled growth and division. Many of the signaling pathways involved in these processes can cross-talk with each other: the components of one pathway can regulate another. For example, I discussed how the protein P53 is known as the Guardian of the Genome, as it is responsible for detecting and mitigating DNA damage. Another recently discovered function of P53 is in promoting normal respiration while dampening aerobic glycolysis. Given that P53 is the most commonly mutated protein in all cancers, it is unsurprising that the loss of normal P53 function disrupts this balance and pushes the cell towards aerobic glycolysis. The cellular pathways described in the Hallmarks of Cancer are not isolated; when mutated, they feed into each other, amplifying their effects and driving cells towards the uncontrolled growth that results in cancer.

It is also important to understand that cancer cells do not function in isolation. Tumors are complex tissues, made up not only of cancer cells, but also blood vessels, immune cells and other bystanders. These healthy cells are co-opted and subverted to perform tasks that support cancer progression. For example, the lactic acid secreted by cancer cells can induce tumor associated macrophages to create new blood vessels for the growing tumor via the HIF pathway. The cellular pathways described in the Hallmarks of Cancer are not only interconnected; the body's own cells, when trapped inside the tumor microenvironment, engage in complementary metabolic pathways, supporting and encouraging cancer cell survival and growth.

Reprinted with permission of Buddhini Samarasinghe and Scientific American, October 8, 2014