A growing tumor will eventually spawn pioneer cells; these move out of the original clump of mutant cells to invade adjacent tissues and then travel to distant sites where they form new colonies. These distant settlements of cancer cells are named metastases and, with the exception of leukemias and some brain tumors, cause the majority of cancer deaths. Metastasis is bad news, with significantly reduced survival rates and prognosis for patients. The ability to metastasize allows cancer cells to find new areas of the body where space and nutrients are not limiting. How do cancer cells do this?

In biology, a tissue is an aggregation of cells that performs a specific function. Tissues combine to form organs; organs combine to form a body. Our tissues are composed primarily of two types of cells; epithelial and mesenchymal cells. Epithelial cells adhere to one another to form cell layers, which act as barriers to protect our bodies and organs from the environment. In contrast, mesenchymal cells are solitary and capable of migrating. Our tissues are not made up solely of cells. A large proportion of tissue consists of extracellular space, which is filled with a mixture of carbohydrate and protein molecules; this space is known as the Extracellular Matrix (ECM). The molecules that make up the ECM are secreted by cells embedded in it, and these cells tether themselves to the ECM (and to one another) to form tissues. Metastasis therefore requires the untethering of these bonds, to allow predacious cancer cells to migrate freely. 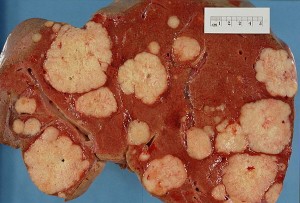 Cross section of a human liver, taken at autopsy examination, showing multiple large pale tumor deposits. The tumor is an adenocarcinoma derived from a primary lesion in the body of the pancreas. Credit: Haymanj/Wikimedia Commons

Several classes of proteins are involved in the tethering of cells to their surroundings. Immunoglobulins and cadherins mediate cell-to-cell adhesions while integrins link cells to the ECM. All of these interactions convey regulatory signals to the cell and should not be viewed as static connections that simply hold cells in place. The most important protein cementing cells to each other is known as E-cadherin. The coupling of cells by E-cadherin results in the transmission of antigrowth signals; this is one of the mechanisms for the phenomenon known as contact inhibition, where cells that touch one another do not grow any further. Unsurprisingly, E-cadherin function is lost in migrating cancer cells. Conversely, another molecule known as N-cadherin shows increased levels in migrating cancer cells, as this molecule helps the cancer cell to slip through blood vessels during migration.

What are the traits of migrating cancer cells? These cells change their appearance, from a neat, ordered cobblestone-like shape to spindly and long-limbed. The cells also untether themselves from the ECM, by expressing proteins that degrade the ECM, notably matrix metalloproteases. They stop expressing E-cadherin, so that the cement that binds them to other cells is eliminated. They express more N-cadherin, so they can move through blood vessels to distant sites more efficiently. A metastatic cancer cell has increased motility and is resistant to apoptosis. These traits occur through the activation of a cellular program that promotes migration, and the molecular mechanism for this program has been identified only recently, within the last decade.

What is the molecular mechanism for cell migration? Under normal circumstances, cells migrate during embryonic development and in response to inflammation. The primary pathway involved in this process is an important developmental program known as the epithelial to mesenchymal transition, or EMT. EMT is a cellular program that has been known in the context of embryonic development for many years. Epithelial cells can be defined as surface cells that display a distinct polarity, that is, knowing which way is up because of being tethered to one another and the underlying ECM. In contrast, mesenchymal cells are loosely packed, have no polarity and are able to migrate freely. During embryonic development, epithelial cells are able to undergo physical and genetic changes collectively referred to as EMT. This occurs through the degradation of the ECM, dissolution of E-cadherin and other cell adhesion junctions and the loss of cell polarity, resulting in the formation of migratory mesenchymal cells that have invasive properties. These cells are then recruited to specific sites in the developing embryo where they can revert back through MET (the reverse of EMT; mesenchymal to epithelial transition) to form epithelial tissues at distant locations. 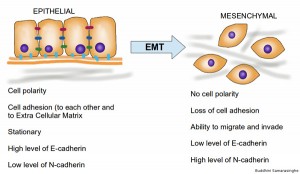 Cancer cells hijack this process, first to enable metastasis through activating the EMT program and then, once they reach their new home, to revert back to epithelial form by activating the MET program. Thus although the EMT-MET program has been known of in the context of embryonic development for many years, it is only recently that the significance of this EMT-MET program to cancer progression has been recognized. 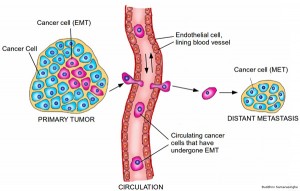 EMT and metastasis. A tumor will have a population of cells that have undergone EMT. These cells are now able to migrate freely, by entering the circulatory system. Upon reaching their final destination, the cells undergo the reverse MET program and forms a secondary tumor at a distant site. Credit: Buddhini Samarasinghe.

Intriguingly, tumors can also possess cancer stem cells; these cells are highly capable of forming tumors. They are thought to persist in tumors as a distinct population of cells and cause relapse and metastasis by forming new tumors. Even a single cancer stem cell can give rise to an entire tumor and worryingly seem resistant to chemotherapy. Recent evidence indicates that a cancer cell that has undergone EMT is, in fact, a cancer stem cell.

TGF-beta: The Ying and the Yang

How do cancer cells activate EMT? In a previous article I explained how the signaling molecule TGF-beta acts as an antigrowth factor, by blocking the cell cycle. But TGF-beta has a darker side; while it acts as a tumor suppressor in the early stages of cancer, it can contribute to malignancy by promoting invasion and metastasis by activating the EMT program. Indeed, the addition of TGF-beta to epithelial cells in culture is a very handy method for inducing the EMT program. The EMT program has a dedicated set of transcription factors; proteins that activate the production of yet more proteins, in a now familiar signaling cascade, to enable the shift from epithelial to mesenchymal form. These transcription factors are Snail, Slug, Twist and ZEB1/2. The signaling cascade is as follows; binding of TGF-beta to its receptor phosphorylates two proteins known as Smad2 and Smad3. These two activated proteins then combine with Smad4, to form a kind of protein 'threesome' that moves into the nucleus, where it activates the production of Snail/Slug, ZEB1/2 and Twist. These transcription factors repress the expression of epithelial characteristics, while activating the expression of mesenchymal characteristics. TGF-beta can also function through non-Smad pathways, all towards shifting the cell's characteristics from epithelial to mesenchymal form. Most important, the activation of these proteins also result in the repression of E-cadherin production; the cement mixer grinds to a halt. 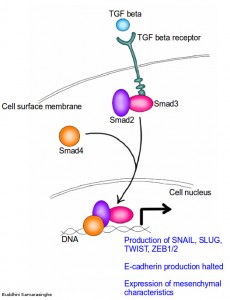 TGF beta signaling pathway for the induction of EMT. TGF beta binds to TGF beta receptor on cell surface. This activates Smad2 and Smad3 proteins, which go on to combine with Smad4. The resulting Smad group of proteins then moves into the cell nucleus and begins the production of snail, slug, twist and ZEB1/2 proteins. These proteins now halt the production of E-cadherin and enable the expression of mesenchymal characteristics. Credit: Buddhini Samarasinghe.

Metastasis and invasion are complicated processes, and these topics continue to be very active fields of research. In the previous articles, I explained that cancer cells further their uncontrolled growth by ruthlessly co-opting their normal neighbor cells to breach the anti-cancer defense mechanisms represented by these hallmarks. This is also true of metastasis. Macrophages, a type of immune cell, turn traitor and contribute to tumor growth and progression. These cells are attracted to the edges of the tumor and supply it with enzymes to degrade the ECM, to enable the cancer cells to break free and migrate. These tumor-associated macrophages also supply growth factors to cancer cells, to enable them to divide and grow; cancer cells reciprocally stimulate the macrophages by producing their favorite growth factor, known as Colony Stimulating Factor. Thus cancer cells can secrete various signaling molecules that recruit pro-invasive inflammatory cells to do their dirty work for them, rather than producing enzymes to degrade the ECM themselves.

Metastasis has been traditionally thought of as the final stages of a burgeoning tumor; indeed, our current classification system for a tumor upon diagnosis assigns a higher value when there is evidence of metastasis. We used to think that cancer cells pass through multiple successive mutations, growing in size, eventually sending away migratory cells to set up shop elsewhere. Dismayingly, recent evidence suggests that metastasis does not necessarily happen in the final stages of cancer progression, but can occur at any time--sometimes even before the primary tumor is observed. The ability to invade and metastasize distant sites is a key hallmark of cancer progression and possibly one of the most complicated and least understood hallmarks so far.

Reprinted with permission of Buddhini Samarasinghe and Scientific American, October 30, 2013